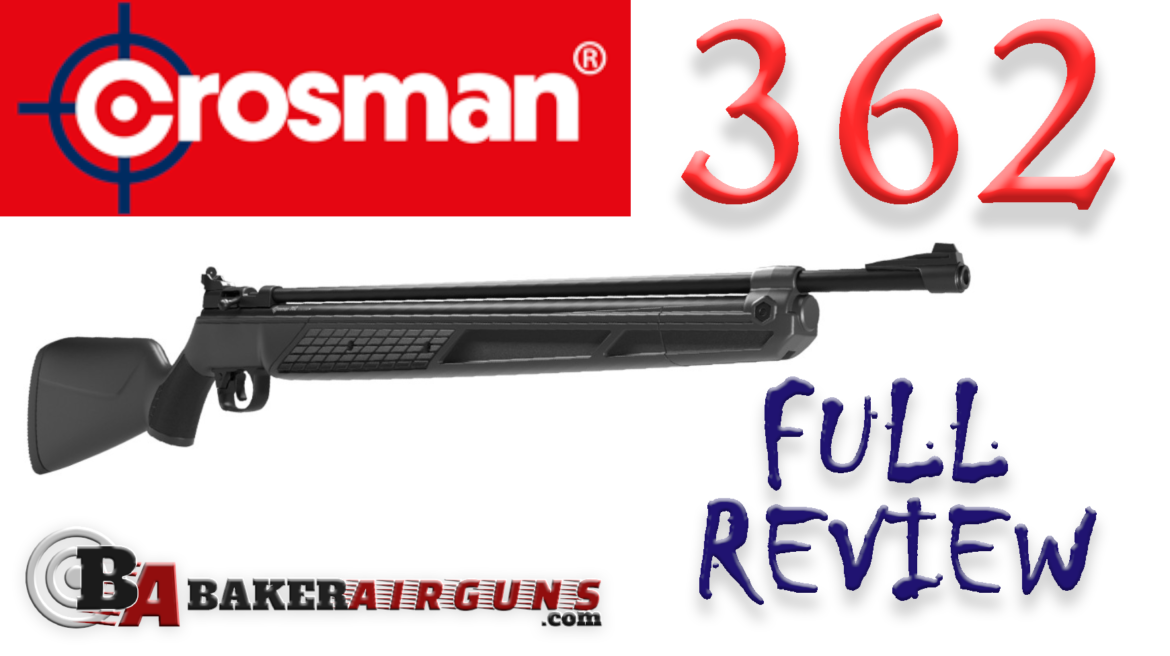 I’d bet a dollar that most of us airgunners started with a multi-pump when we were kids.  I know I did.  The Daisy 880 and the Crosman 1377 were my first two.  Many more followed, and I literally cannot even guess how many thousands and thousands of shots I’ve taken with a multi-pump airgun.  Perhaps that is why I still have a soft spot in my heart for a good multi-pump.  Judging by how many multi-pumps we both repair and sell here at Baker Airguns…I’m not alone.  Leave it to Crosman to release a brand new multi-pump in 2022 to tempt us, and at a fantastic price…no less.  This is the Baker Airguns full review of the new, soon to be classic, Crosman 362.  Below is a link to the full review video that accompanies this written report.  I suggest taking them both in for the full story.

The first thing I want to tell you about the new 362 is that it is a very powerful multi-pump .22 caliber airgun.  The advertised muzzle velocity with the maximum of 8 pumps and using “lead pellets” is 700fps.  Using the JSB 15.89gr pellets and 8 pumps, I got an average velocity of 610fps and 13.1ft-lbs of muzzle energy!  This is plenty of energy to hunt most small game animals.  What’s more is that you can increase the velocity and energy of the gun by simply adding a longer barrel…..and possibly another product as well.  We’ll talk more about that later.

The 362 utilizes a synthetic stock that is very comfortable.  It has texturing on the grip and forearm that feel nice.  It’s also very light and nimble at only 5lbs.  You’ll find the fully adjustable rear sight familiar, as it’s the same one used on the 22xx and 13xx models.  In fact, the entire breech is the same.  This means that…yes…you can swap the original breech for our Baker Airguns Aluminum Breech.  These are much nicer than the originals, and give you the ability to add a scope.

The trigger on the 362 is more similar to the ones on the Discovery and Maximus than it is to the 22xx/13xx.  Mine pulled at a little over 4lbs, though the advertised pull weight is a bit over 5lbs.  It’s character is on par with other Crosman triggers.  Nothing spectacular, but not bad.  I think you’ll find it perfectly safe and usable.

The accuracy of the 362 is quite impressive.  I actually used two guns for my accuracy testing.  One of the guns was bone stock, and the other highly modified.  The modifications include our Aluminum Breech (with a UTG 3-9×40 True Hunter scope), a 24″ barrel, a TKO Moderator, some trigger work, and our new Max-Flow Valve for Crosman 362.    More on these modifications later.  My testing was done indoor at 20 yards using the JSB 15.89gr pellets.  For the stock gun, I used the peep rear sight as opposed to the notch.

Below you’ll see a typical five shot group using the bone stock gun with open sights.  Just a bit over an inch for all five, and four out of five at only 0.645″.  That’s pretty good for open sights.

Using the highly modified gun with a scope, I was able to tighten things up even more.  All five shots in 0.608″.

With or without a scope, modified or unmodified….that’s some deadly accuracy from the 362.  Much like the 22xx/13xx guns, part of the allure of the new 362 will be that it is highly modifiable.  First and foremost, replacing the stock plastic breech with our Baker Airguns Aluminum Breech gives you the ability to mount a scope…with less weight and a lower price than the steel breeches that are available.  If you want to make more power, you can add our Baker Airguns Max-Flow valve for Crosman 362  which added 60fps to an otherwise stock gun.  You can also add a longer barrel.  The combination of our Max-Flow Valve for 362 and a 24″ barrel added 77fps.  We sell Crosman .22 Caliber Rifled Steel Barrels from 7″ up to 24″.

If you want to quiet down the gun, the TKO Moderator will fit right onto the barrel.  Naturally, you’ll have to sacrifice the front sight to do this.  Trigger work is always possible on any gun, but we unfortunately don’t have any trigger that will drop right in.  Trigger work should only be performed by highly trained professionals…so perform this modification at your own risk.

The new Crosman 362 is a definite winner in my book, whether bone stock or highly modified.  The power and accuracy it gives you for such a meager price is practically unmatched.  It’s light, simple, and reliable.  It works great right out of the box or highly modified.  Especially at it’s price…I’d highly recommend adding one of these to your collection.  We have these and all of the modification parts in stock now here at Baker Airguns.

If you’re like me, Made In America means something to you.  Sure, other countries can produce some fine goods…but when there is something exceptional made right here in the good old USA…that’s the one I want.  The American Air Arms EVOL is one of those exceptional things made here in America….and yes….I want one!  The … END_OF_DOCUMENT_TOKEN_TO_BE_REPLACED
Read More »

Leave it to FX Airguns to take a fantastic gun and make it better.  This is surely the case with the new Wildcat MkIII BT.  BT meaning that the gun now has a carbon fiber bottle, but that’s not the only improvement made.  The new BT also now has two AMP regulators and the same … END_OF_DOCUMENT_TOKEN_TO_BE_REPLACED
Read More »

Every once in a while, a combination of things that have existed for some time come together and are so good that you ask yourself why you haven’t been doing this already.  I think this is the case with the airgun and the LPVO, or Low Powered Variable Optic.  If you make that a semi-automatic … END_OF_DOCUMENT_TOKEN_TO_BE_REPLACED
Read More »

Hi everybody.  Today’s review is on the new flagship scope from Hawke…the Frontier 34 SF ZS FFP.  The acronyms stand for Side Focus, Zero Stop, and First Focal Plane.  The 34 stands for the massive 34 millimeter main tube.  The scope has all of these attributes, and many more.  With a price tag into the … END_OF_DOCUMENT_TOKEN_TO_BE_REPLACED
Read More »

Hi everyone.  This article is going to show you how I set up a gun for field target competition.  Specifically, for Hunter Field Target.  There are different classes in field target, and Hunter is by far the most popular class.  It’s also where I’d recommend starting out if you’re new to field target.  I wrote … END_OF_DOCUMENT_TOKEN_TO_BE_REPLACED
Read More »

I’d bet a dollar that most of us airgunners started with a multi-pump when we were kids.  I know I did.  The Daisy 880 and the Crosman 1377 were my first two.  Many more followed, and I literally cannot even guess how many thousands and thousands of shots I’ve taken with a multi-pump airgun.  Perhaps … END_OF_DOCUMENT_TOKEN_TO_BE_REPLACED
Read More »
Loading...