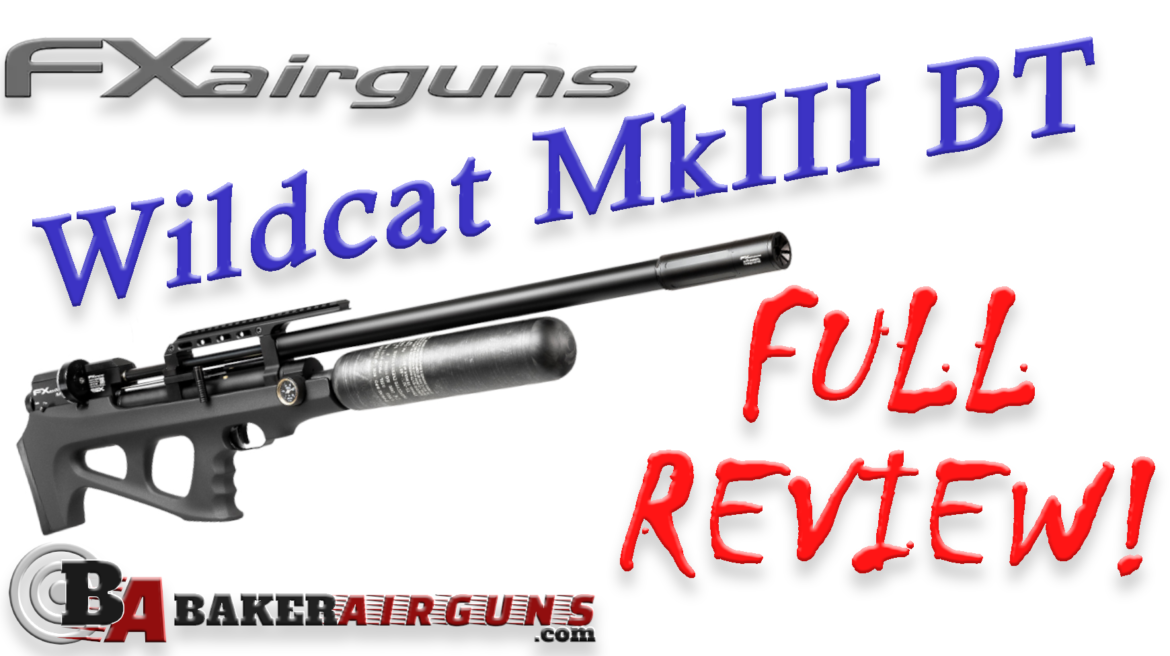 Leave it to FX Airguns to take a fantastic gun and make it better.  This is surely the case with the new Wildcat MkIII BT.  BT meaning that the gun now has a carbon fiber bottle, but that’s not the only improvement made.  The new BT also now has two AMP regulators and the same 89cc Power Plenum as the FX Maverick.  All of this adds up to far more power than previous versions of the Wildcat.  This gives you the ability to shoot heavier projectiles and slugs.  It also gives you far more shots when you use a conservative pellet tune.  Let’s delve into what you can expect from the new Wildcat BT.  Below is a link to the full review video that accompanies this written report.  I suggest taking them both in for the full story.

The controls and ergonomics of the BT are unchanged from the previous MkIII version save for the addition of the front regulator which is adjustable.  Same great trigger, same ease of adjustment.  The ergonomics of the Wildcat have always been praised, especially for offhand shooting.  More on that later.  For it’s barrel length and capability, it’s a very light and compact package.  The .30 Sniper version that I used for this review is 36″ long despite it’s 700mm barrel and weighs in at a mere 7.2lbs.  You couldn’t ask for a better hunting gun.

As I said, the BT is far more powerful than previous versions of the Wildcat.  How powerful?  According to FX, in .30 caliber you can expect up to 113ft-lbs!  That will send even heavy slugs nice an fast.  In my testing I left the gun with the factory tune.  This sent the JSB Exact 44.75gr pellet at an average of 892fps and roughly 79ft-lbs.  That’s generally the sweet spot for those pellets.  What’s really impressive was my shot count.  I got an average of 85 shots per fill.  That’s incredible!  My average extreme spread was about 15fps over the entire shot string with an average standard deviation of 4fps.  What more could you ask for?

Accuracy.  That’s what you could ask for.  It’s no surprise that the BT displayed stellar accuracy at 100yds.  I unfortunately couldn’t get to my indoor 100yd range, so I went out to the Baker compound for my testing.  Naturally, the wind was quite tricky during my testing.  My objective is to show you the capability of the gun when I do accuracy testing.  For this reason, I limited myself to three shot groups.  Using the JSB Exact 44.75gr pellets, I printed several sub 1/2″ groups at 100 yards.  Below is a picture of the group of the day.  I didn’t test slugs because there are so many to choose from and everyone is going to set up the gun differently.  Suffice it to say that if you put in the work, you can expect similar accuracy with your favorite slug.

One of the most common things you’ll hear about the FX Wildcat is how nice it is to shoot offhand.  This is a sentiment that I wholly agree with.  To see if the changes to the BT affected this, I decided to try and shoot a can of spray paint offhand at 100 yards.  It was almost too easy, and I did it twice in a row.  The reason for that is that I forgot to turn on one of the cameras the first time.  I’m all looks and no brains….and we both know it!  Be sure to check out the video to see that actually happen.

No doubt about it, the FX Wildcat BT is an absolute winner.  It’s everything you’ve always loved about the Wildcat with expanded capabilites.  You can now achieve slug level velocities with even the Compact version of the gun.  The possibilities are endless for this platform.  I like it so well, that it might now be my absolute favorite FX gun.  Check them out here at Baker Airguns.

If you’re like me, Made In America means something to you.  Sure, other countries can produce some fine goods…but when there is something exceptional made right here in the good old USA…that’s the one I want.  The American Air Arms EVOL is one of those exceptional things made here in America….and yes….I want one!  The … END_OF_DOCUMENT_TOKEN_TO_BE_REPLACED
Read More »

Leave it to FX Airguns to take a fantastic gun and make it better.  This is surely the case with the new Wildcat MkIII BT.  BT meaning that the gun now has a carbon fiber bottle, but that’s not the only improvement made.  The new BT also now has two AMP regulators and the same … END_OF_DOCUMENT_TOKEN_TO_BE_REPLACED
Read More »

Every once in a while, a combination of things that have existed for some time come together and are so good that you ask yourself why you haven’t been doing this already.  I think this is the case with the airgun and the LPVO, or Low Powered Variable Optic.  If you make that a semi-automatic … END_OF_DOCUMENT_TOKEN_TO_BE_REPLACED
Read More »

Hi everybody.  Today’s review is on the new flagship scope from Hawke…the Frontier 34 SF ZS FFP.  The acronyms stand for Side Focus, Zero Stop, and First Focal Plane.  The 34 stands for the massive 34 millimeter main tube.  The scope has all of these attributes, and many more.  With a price tag into the … END_OF_DOCUMENT_TOKEN_TO_BE_REPLACED
Read More »

Hi everyone.  This article is going to show you how I set up a gun for field target competition.  Specifically, for Hunter Field Target.  There are different classes in field target, and Hunter is by far the most popular class.  It’s also where I’d recommend starting out if you’re new to field target.  I wrote … END_OF_DOCUMENT_TOKEN_TO_BE_REPLACED
Read More »

I’d bet a dollar that most of us airgunners started with a multi-pump when we were kids.  I know I did.  The Daisy 880 and the Crosman 1377 were my first two.  Many more followed, and I literally cannot even guess how many thousands and thousands of shots I’ve taken with a multi-pump airgun.  Perhaps … END_OF_DOCUMENT_TOKEN_TO_BE_REPLACED
Read More »
Loading...