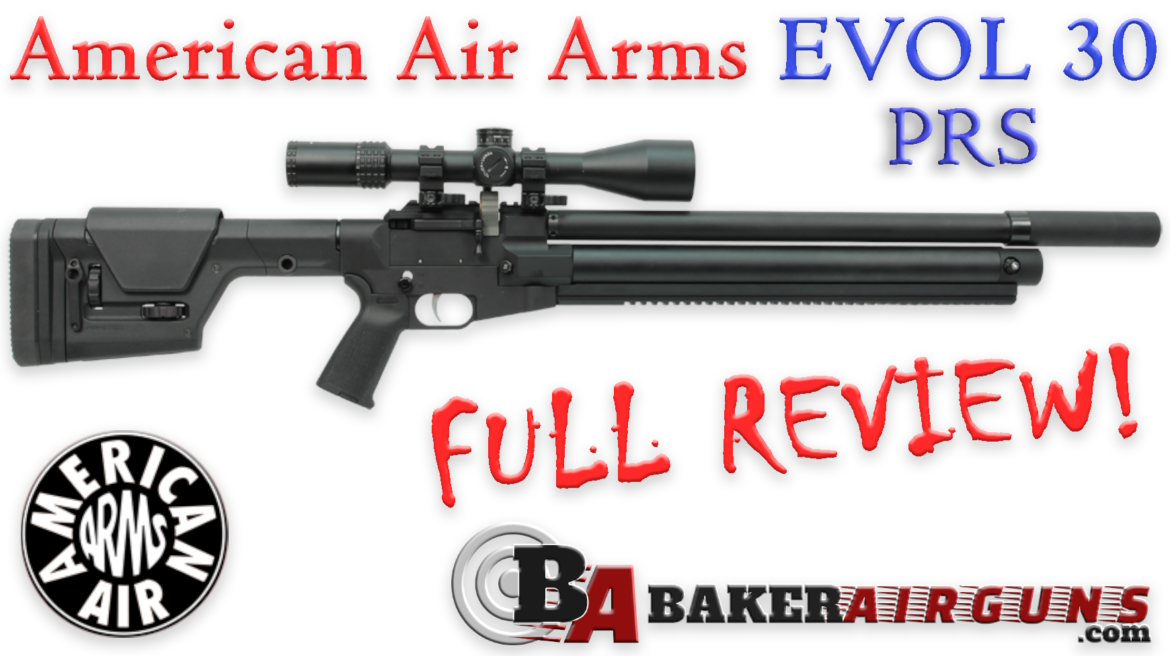 If you’re like me, Made In America means something to you.  Sure, other countries can produce some fine goods…but when there is something exceptional made right here in the good old USA…that’s the one I want.  The American Air Arms EVOL is one of those exceptional things made here in America….and yes….I want one!  The link below is to the full length video review that accompanies this written report.  I suggest taking them both in for the full story.

As the company name would imply, the EVOL is made right here in America.  Southern California, to be specific. Quality control is second to none, as we’ve had zero warranty claims from the guns we’ve sold.  These things are well put together using nearly 100% made in America components.  In fact the only parts not made in America are the barrels, grips, and bolts.  The gun gets it’s name from it’s Magpul PRS Lite AR-15 style stock.  It also has a Magpul AR-15 pistol grip.

The EVOL PRS 30 uses a 290cc titanium air cylinder that charges via a male Foster quick connect fitting to a full 4,000psi.  It’s incredibly strong and lightweight for it’s size.  The whole gun is 39″ long and weighs just 7.2lbs.  From a full fill, you can expect to get every bit of 30 shots out of the gun.  Probably a few more than 30.  What’s more is that you can expect an extreme spread of around 7fps on a full string!  That’s as good or better than anything in the industry.  Using the JSB 44.75gr pellets I got an average of 883fps and roughly 77.5ft-lbs of muzzle energy.

The gun has an exceptional, fully adjustable, two stage trigger with an ambidextrous safety.  Pull weight straight out of the box was a mere 6oz and felt wonderful.  The side-lever action is a little stiff but buttery smooth.  The magazines are made in-house and are of full metal construction.  The .30 caliber mags hold 9 rounds.  The picatinny optics rail has 50MOA of elevation built right in to facilitate longer range airgun shooting.  It also has a full length lower picatinny accessory rail for bipods or what have you.

A polished 18″ TJ  barrel adorns the EVOL 30.  Just as you’d expect, it’s capable of some stellar accuracy.  The barrel has a shroud that hides an air stripper, and is also equipped with a proprietary moderator that keeps the beast fairly quiet.  I measured 80.7dB indoors directly at the muzzle.  While I can shoot a rested gun even though I’m still healing from shoulder surgery, I am definitely not 100%.  I did the very best that I could, but keep that in mind while looking at these accuracy results….as I believe the gun is capable of even better.  Using our local indoor 100yd range, I shot four groups for an average of  1.25″ with a smallest group of 1.04″ using the JSB 44.75gr pellets. 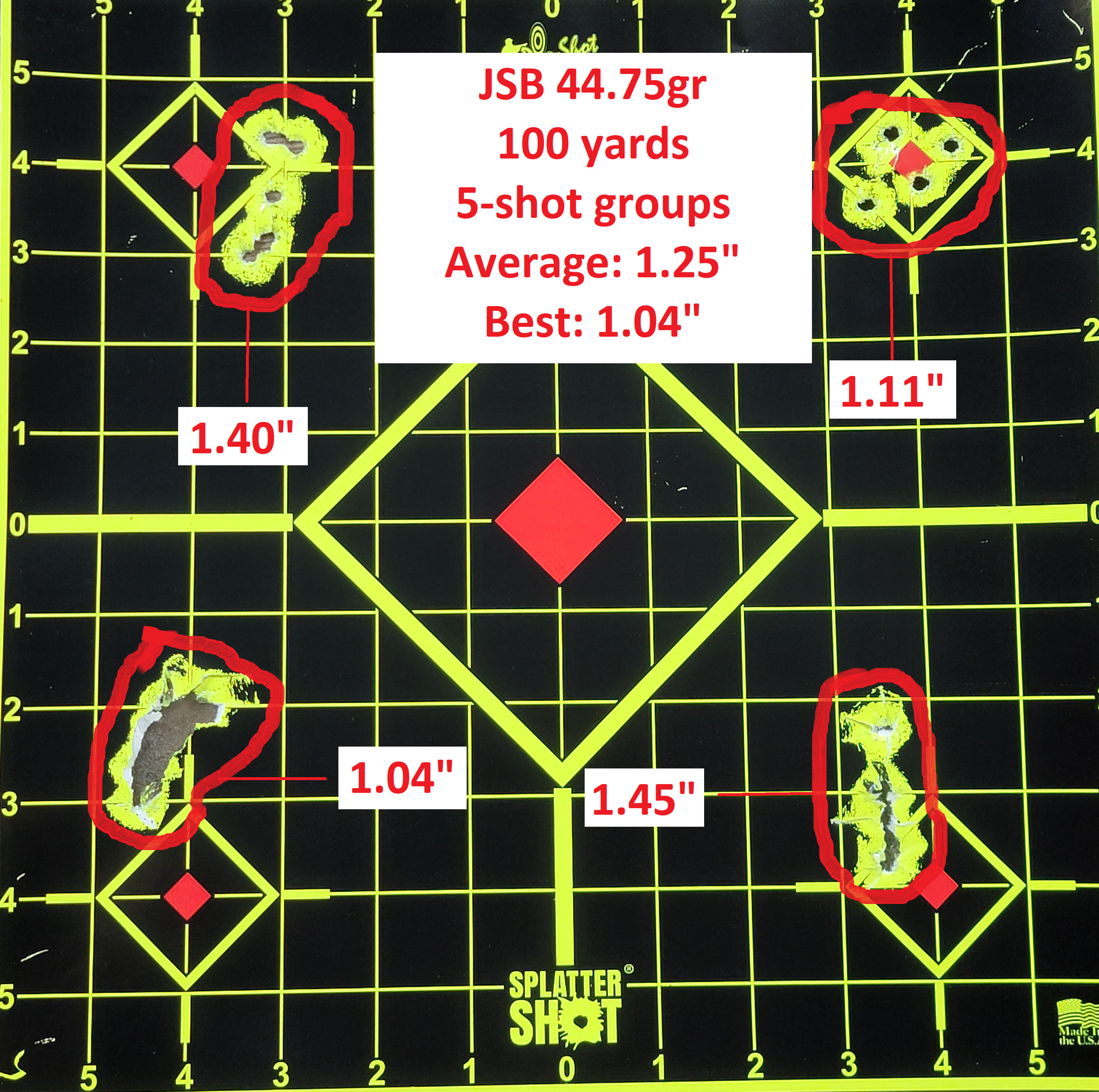 Aside from being made in the USA, there are a lot of reasons to get an EVOL.  The performance and build quality are second to none in the industry.  It’s light and powerful, handily filling the role of hunting gun or competition gun.  It is elegant American made simplicity, and I highly suggest taking a look at one.

If you’re like me, Made In America means something to you.  Sure, other countries can produce some fine goods…but when there is something exceptional made right here in the good old USA…that’s the one I want.  The American Air Arms EVOL is one of those exceptional things made here in America….and yes….I want one!  The … END_OF_DOCUMENT_TOKEN_TO_BE_REPLACED
Read More »

Leave it to FX Airguns to take a fantastic gun and make it better.  This is surely the case with the new Wildcat MkIII BT.  BT meaning that the gun now has a carbon fiber bottle, but that’s not the only improvement made.  The new BT also now has two AMP regulators and the same … END_OF_DOCUMENT_TOKEN_TO_BE_REPLACED
Read More »

Every once in a while, a combination of things that have existed for some time come together and are so good that you ask yourself why you haven’t been doing this already.  I think this is the case with the airgun and the LPVO, or Low Powered Variable Optic.  If you make that a semi-automatic … END_OF_DOCUMENT_TOKEN_TO_BE_REPLACED
Read More »

Hi everybody.  Today’s review is on the new flagship scope from Hawke…the Frontier 34 SF ZS FFP.  The acronyms stand for Side Focus, Zero Stop, and First Focal Plane.  The 34 stands for the massive 34 millimeter main tube.  The scope has all of these attributes, and many more.  With a price tag into the … END_OF_DOCUMENT_TOKEN_TO_BE_REPLACED
Read More »

Hi everyone.  This article is going to show you how I set up a gun for field target competition.  Specifically, for Hunter Field Target.  There are different classes in field target, and Hunter is by far the most popular class.  It’s also where I’d recommend starting out if you’re new to field target.  I wrote … END_OF_DOCUMENT_TOKEN_TO_BE_REPLACED
Read More »

I’d bet a dollar that most of us airgunners started with a multi-pump when we were kids.  I know I did.  The Daisy 880 and the Crosman 1377 were my first two.  Many more followed, and I literally cannot even guess how many thousands and thousands of shots I’ve taken with a multi-pump airgun.  Perhaps … END_OF_DOCUMENT_TOKEN_TO_BE_REPLACED
Read More »
Loading...