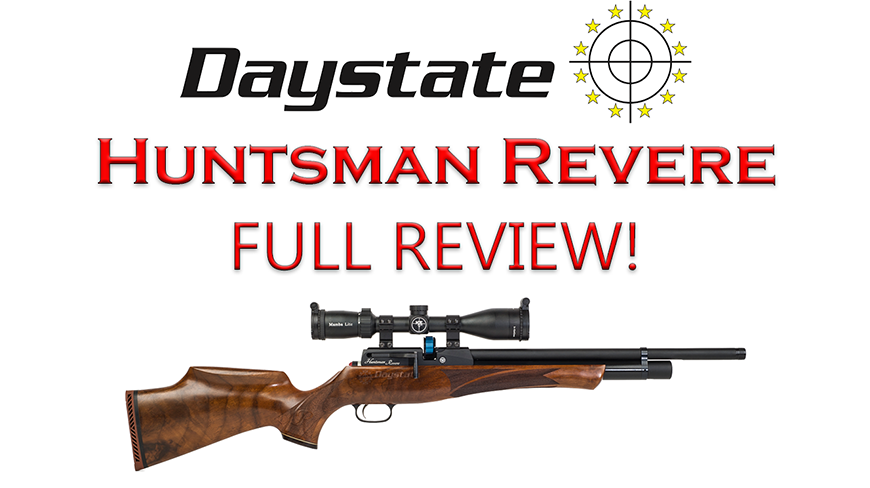 K.I.S.S.  An acronym meaning “Keep It Simple Stupid.”  There is a certain elegance in simplicity…especially when it works outstandingly well.  The Daystate Huntsman line of airguns is a fine example of elegant simplicity.  In contrast to the many airguns on today’s market that have an adjustment for every aspect of the gun, the ability to change calibers, and modular platforms where you can change stocks and attach what-nots and doo-hickeys…the Daystate Huntsman line of airguns are simple, no nonsense, and shoot like a dream right out of the box.  No adjustments necessary.  Daystate has adhered to that K.I.S.S. philosophy with their latest offering in the Huntsman line…the Daystate Huntsman Revere.  Just like it’s earlier Huntsman brethren, it’s near perfection right out of the box.  The link below is to the full review video that accompanies this article.  I suggest taking both of them in for the full story.

While kept simple, the Huntsman Revere has some welcomed upgrades.  Most notable is the completely redesigned breech that is now side-lever operated.  Just like it’s big brother, the Daystate Wolverine R, the side lever is a butter smooth short throw design.  Being a long time Wolverine R owner, my subjective opinion is that they feel exactly the same….which is to say very,very good.  The safety is still at the rear of the breech and seems to be the same as what is on earlier model Huntsmans.  The new breech now accommodates the same single shot tray used in the Red Wolf and the Wolverine R…with a catch.  Compared to the way it fits in the Red Wolf or the Wolverine R…it goes into the Revere backwards.  There is an arrow on those single shot trays that points towards the muzzle on the Red Wolf and the Wolverine R.  When used in the Revere, that arrow points backwards.  I assure you, it is perfectly fine to use it with the arrow pointing the “wrong” way. 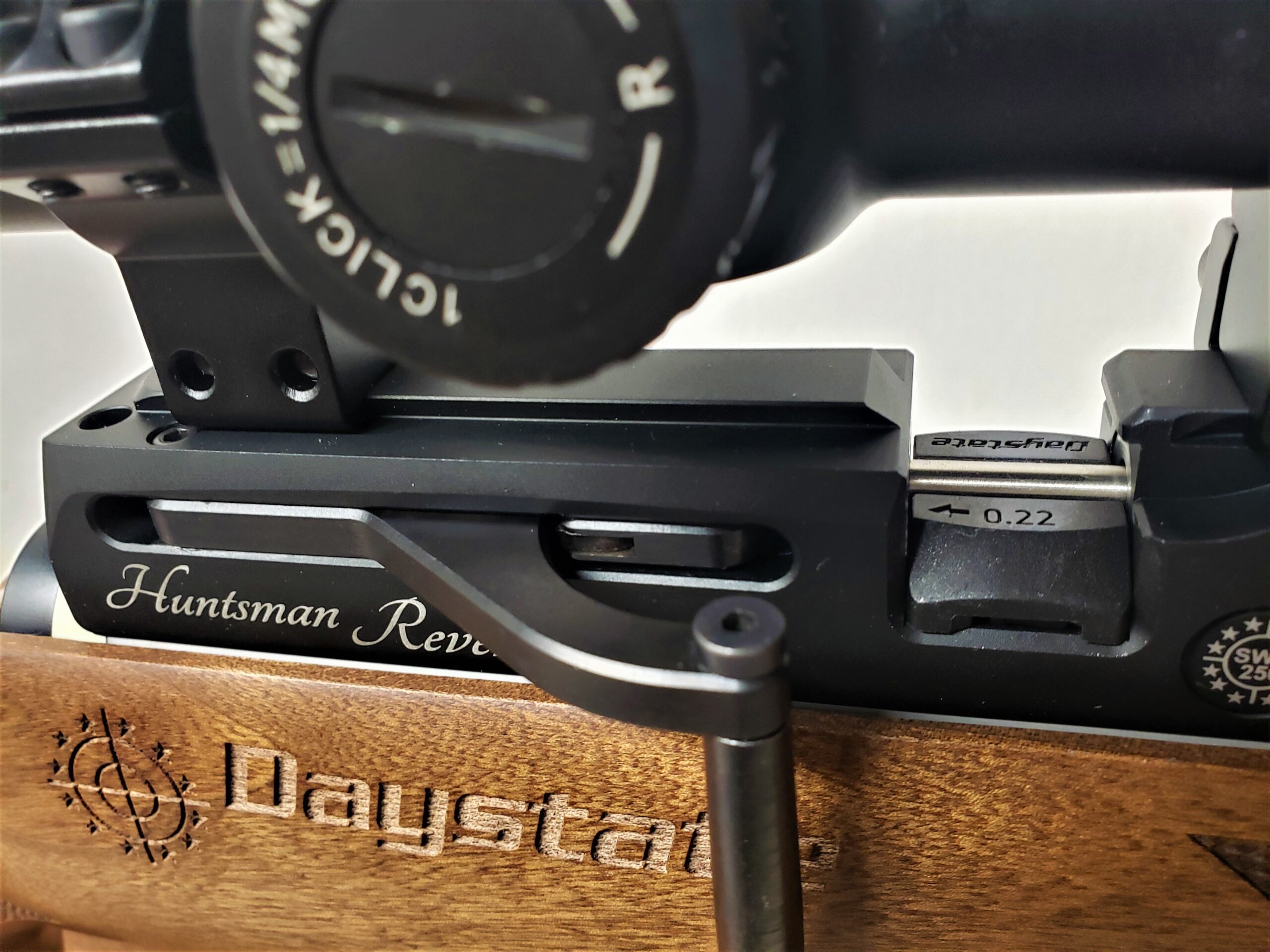 Another big change to the Revere is the magazine.  You might think that a magazine change is no big deal…but I do.  The magazine for the Revere is the new blue “trap door” design from Daystate.  These operate quite differently than the previous version Daystate magazines.  It was impossible to double load the gun with the old magazine due to an air operated pin advance mechanism built into both the older guns and the older magazines.  While this was a nice feature to have, both that air operated pin as well as the corresponding trip mechanism in the magazines was a common failure point.  Though it is now possible to double load your guns (even the older models) using the new magazine, I personally feel that the elimination of that system can only make the guns and magazines more reliable.  Another benefit of the elimination of that system in the Revere is that you can now decock the gun.  I see all of that as a good thing.  The new magazines also hold more pellets…13 shots in .177, 11 shots in .22, and 10 shots in .25.  Best of all, the new magazines that ship with the right handed guns load from the right side.  Previously, the magazines were designed to load from the left side.  Anybody with a large parallax wheel on their gun can tell you why the left side loading wasn’t the best choice.  The new magazines are also faster and easier to load via the flip down trap door.  There’s no question that I’m a huge fan of the new magazine design.

Other than that, the Revere is quite similar to the earlier model Huntsmans.  It retains the patented Daystate hammer and valve system as well as the Huma designed regulator.  More on that in a few.  The stocks are identical to the earlier Huntsmans, which I have always found well balanced and exquisitely comfortable.  Both right handed and left handed versions are available.  There is still a wonderful two stage, fully adjustable trigger.  The .22 Revere that I used for the review had the top-shelf trigger pull you’d expect from a Daystate with a measured pull weight of 1lb 10oz.  Of course, it is adjustable from there.  The guns still have a shrouded, match grade Lothar Walther barrel…though with an update I like very much.  There is no moderator attached to the shroud, but it terminates in 1/2 x 20 UNF threading with a thread protector installed from the factory.  Add your favorite moderator as you see fit with no need for an adapter.  Admittedly, the gun is a little snappy with no moderator.  It’s not obnoxious, but I added a DonnyFL Tanto to keep things nice and quiet.

So more on that Huma regulator and the patented Daystate hammer and valve system.  In a word…WOW!  Just like the other guns sporting this system, the performance of the Revere is astounding.  I used the JSB Exact Heavy 18.13gr (5.52mm headsize) pellets for the bulk of my testing.  With the gun’s 162cc tube reservoir filled to it’s 250BAR safe working pressure, I got 46 shots on the reg with an 8fps extreme spread.  That is incredible, and this is 7 more shots than Daystate claims you will get.  My average velocity was 843fps for about 28.5ft-lb. 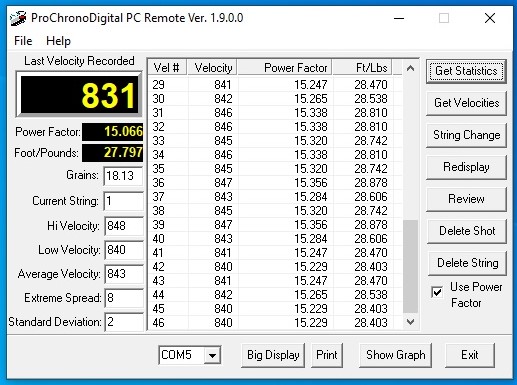 That accuracy of the Revere is equally as impressive as the regulation and the valving.  I again used the JSB Exact Heavy 18.13gr (5.52mm headsize) pellets for my initial testing.  At 30 yards, it makes a single pellet hole.  Stretched out to 50 yards, every single one of my groups was a half inch or better.  The group that I caught on camera is representative of the average of all the groups I shot.  Below you can see that five shot group which was 7/16″ CTC.  Some groups were even better. 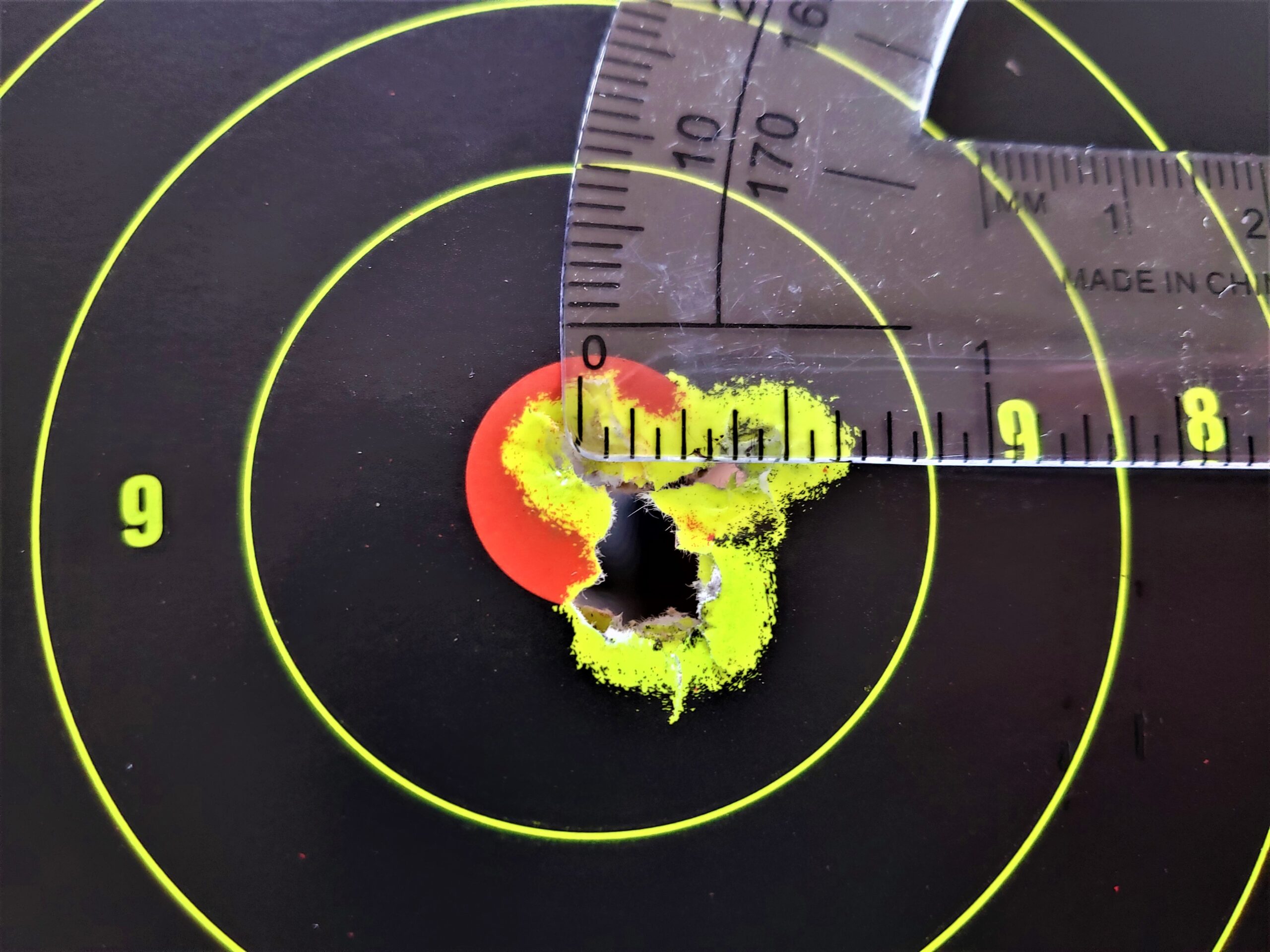 Of course, I also tried some slugs in the Revere .22 cal.  I tried quite a few, but not all, of the common offerings.  The gun did not do well with most slugs, but did seem to like the H&N Slug HP 23gr 0.217″ slugs.  If I’ve said it once, I’ve said it a million times.   Try them in your gun!  Don’t listen to the common consensus.  This gun has a choked barrel and throws the H&N slugs at a modest 730fps average….yet still produces perfectly acceptable groups at 50 yards.  The group below is again representative of the average group I shot with them.  It’s just over a half inch at 9/16″.  That’s not bad, and perfectly suitable for hunting purposes.

The Daystate Huntsman Revere weighs in at only 6.17lbs unscoped.  Without a moderator, it’s a mere 36.5″ long.  It is supremely consistent, amazingly accurate, light, nimble, well balanced, simple, and beautiful.  I absolutely love this gun.  It doesn’t need adjusted.  It doesn’t need what-nots and doo-hickeys all over it.  It simply needs a scope, some air, and some pellets.  That’s what I like best about it.  There are no external adjusters for the reg or hammer spring or anything else.  It’s fine just the way it is and I have no desire to change anything about it.  Sight it in, fill it up, and get out into the woods with it.  It’s a Huntsman, and it excels in that role.  I hope this review has been helpful and informative.

If you’re like me, Made In America means something to you.  Sure, other countries can produce some fine goods…but when there is something exceptional made right here in the good old USA…that’s the one I want.  The American Air Arms EVOL is one of those exceptional things made here in America….and yes….I want one!  The … END_OF_DOCUMENT_TOKEN_TO_BE_REPLACED
Read More »

Leave it to FX Airguns to take a fantastic gun and make it better.  This is surely the case with the new Wildcat MkIII BT.  BT meaning that the gun now has a carbon fiber bottle, but that’s not the only improvement made.  The new BT also now has two AMP regulators and the same … END_OF_DOCUMENT_TOKEN_TO_BE_REPLACED
Read More »

Every once in a while, a combination of things that have existed for some time come together and are so good that you ask yourself why you haven’t been doing this already.  I think this is the case with the airgun and the LPVO, or Low Powered Variable Optic.  If you make that a semi-automatic … END_OF_DOCUMENT_TOKEN_TO_BE_REPLACED
Read More »

Hi everybody.  Today’s review is on the new flagship scope from Hawke…the Frontier 34 SF ZS FFP.  The acronyms stand for Side Focus, Zero Stop, and First Focal Plane.  The 34 stands for the massive 34 millimeter main tube.  The scope has all of these attributes, and many more.  With a price tag into the … END_OF_DOCUMENT_TOKEN_TO_BE_REPLACED
Read More »

Hi everyone.  This article is going to show you how I set up a gun for field target competition.  Specifically, for Hunter Field Target.  There are different classes in field target, and Hunter is by far the most popular class.  It’s also where I’d recommend starting out if you’re new to field target.  I wrote … END_OF_DOCUMENT_TOKEN_TO_BE_REPLACED
Read More »

I’d bet a dollar that most of us airgunners started with a multi-pump when we were kids.  I know I did.  The Daisy 880 and the Crosman 1377 were my first two.  Many more followed, and I literally cannot even guess how many thousands and thousands of shots I’ve taken with a multi-pump airgun.  Perhaps … END_OF_DOCUMENT_TOKEN_TO_BE_REPLACED
Read More »
Loading...