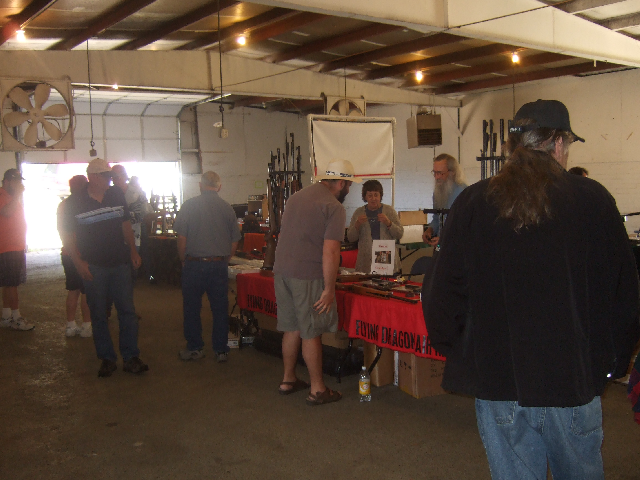 Dad and I just returned from the Arkansas Airgun Extravaganza just west of Little Rock Arkansas. The good news is that we had a great time and missed the tornados. the bad news I came home poor as a church mouse. Well…I am airgun rich. Dad and I made our annual pilgrimage to Malvern Arkansas for the Arkansas Airgun Extravaganza. Along the way we stopped at Daisy Outdoor products and the Daisy Museum. We missed the company folks who were all attending the NRA Convention in Indianapolis but we had a nice visit with Deborah and Lisa at the museum.

If you have any interest in vintage airguns and have not been to the Daisy museum in Rogers Arkansas, make a point put it on your bucket list. Situated in the quaint village of Rogers, this small museum is a jewel in the history of the Daisy BB Gun. The museum is beautifully appointed and artfully depicts the history of Daisy from it’s 19th century roots as the Plymouth iron Windmill company through its classic period of the 1940’s and 50’s right up to it current status as the world’s premier BB gun supplier.

Daisy is one of the most recognized brand names in the world. If you say BB gun, people most often think of Daisy. Dating back to the end of the 19th century, they are on of America’s oldest and most well known companies.

After visiting the museum and loading up with a trunk load of museum goodies, we headed through the beautiful Ozark Mountains just west of Little Rock to the Hot Springs County Fairground in Malvern Arkansas.

The Arkansas Airgun Extravaganza is the successor to the Little Rock Airgun Show that was one of the most popular Airgun Shows in the country for many years. When the operators were no long available to continue Seth Rowland and his lovely wife graciously took over the work and moved the venue to Malvern. They are doing a great job. This show draws some of the top airgun experts in the country. Although Tim Gaylord was unable to attend this year, the attendees included Larry Hannusch, Dennis Quackenbush, Dave Slade and many others. I have said this before but it needs repeated. The folks in the airgun hobby are some of the nicest I’ve met, they welcome newcomers like long lost friends and create a comfortable environment for everyone.

The fairground location is well suited for the purpose and offers plenty of parking, easy access, good lighting and a place to shoot and test airguns. It is a great location in may ways.
I sold several airguns but, as usual, bought even more. My airgun addiction was in full bloom. Some of my purchases include a Diana 6M match pistol, Crosman 1100 air shotgun, Crosman 400, Crosman 1400, Benjamin 397 G C02 rifle, Benjamin NP XL 1100, Benjamin 340, Crosman 101, a nice Sherdian Blue Streak, and several other very nice pieces. I picked up about 15 or 20 airguns altogether.

The show had some nice door prizes and a silent auction for a Evanix Bullpup donated by Pyramid Air. Lucky me, I won a new Benjamin Trail NP XL 100 donated by Crosman. Whattadeal!

All in all this was a great trip. Got to spend some time with my serious airgun addicted Dad, saw some pretty country, looked at lots of nice airguns and talked to some nice people. Is this heaven or what?

One thought on “Arkansas Airgun Extravaganza”

If you’re like me, Made In America means something to you.  Sure, other countries can produce some fine goods…but when there is something exceptional made right here in the good old USA…that’s the one I want.  The American Air Arms EVOL is one of those exceptional things made here in America….and yes….I want one!  The … END_OF_DOCUMENT_TOKEN_TO_BE_REPLACED
Read More »

Leave it to FX Airguns to take a fantastic gun and make it better.  This is surely the case with the new Wildcat MkIII BT.  BT meaning that the gun now has a carbon fiber bottle, but that’s not the only improvement made.  The new BT also now has two AMP regulators and the same … END_OF_DOCUMENT_TOKEN_TO_BE_REPLACED
Read More »

Every once in a while, a combination of things that have existed for some time come together and are so good that you ask yourself why you haven’t been doing this already.  I think this is the case with the airgun and the LPVO, or Low Powered Variable Optic.  If you make that a semi-automatic … END_OF_DOCUMENT_TOKEN_TO_BE_REPLACED
Read More »

Hi everybody.  Today’s review is on the new flagship scope from Hawke…the Frontier 34 SF ZS FFP.  The acronyms stand for Side Focus, Zero Stop, and First Focal Plane.  The 34 stands for the massive 34 millimeter main tube.  The scope has all of these attributes, and many more.  With a price tag into the … END_OF_DOCUMENT_TOKEN_TO_BE_REPLACED
Read More »

Hi everyone.  This article is going to show you how I set up a gun for field target competition.  Specifically, for Hunter Field Target.  There are different classes in field target, and Hunter is by far the most popular class.  It’s also where I’d recommend starting out if you’re new to field target.  I wrote … END_OF_DOCUMENT_TOKEN_TO_BE_REPLACED
Read More »

I’d bet a dollar that most of us airgunners started with a multi-pump when we were kids.  I know I did.  The Daisy 880 and the Crosman 1377 were my first two.  Many more followed, and I literally cannot even guess how many thousands and thousands of shots I’ve taken with a multi-pump airgun.  Perhaps … END_OF_DOCUMENT_TOKEN_TO_BE_REPLACED
Read More »
Loading...