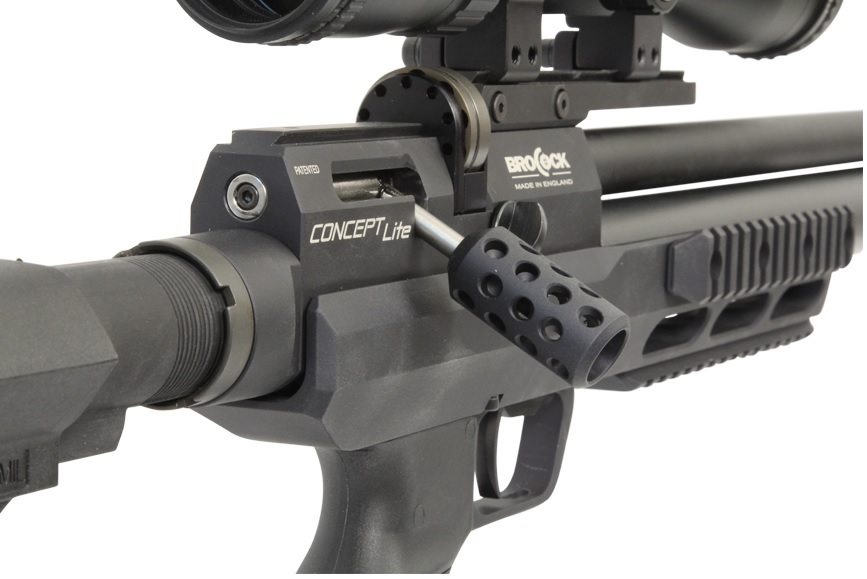 The new Brocock Concept Lite is a cool new airgun that has a lot going for it.  It has a new chassis design that sports three removable 1913 picatinny style rails right where you want them.  There is one on the bottom, and one on each side of the gun.  I really like this, as I’m constantly adding both a lower rail for a bipod and a side rail for a light to most of my personal guns.  I also do this very often for customers.  If one were to buy a Concept Lite, the rails would already be there.  If one wanted no rails at all, no problem.  Just remove them.  I can’t overstate how much I like this feature.  The airgun truly is “lite” weighing in at only 6.5lbs naked, and is only 32″ long with the stock collapsed.  Our brand new FULL REVIEW video that accompanies this blog can be found below.

What’s more is that the Brocock Concept Lite feels closer to an AR15 than any other of the guns that try to mimic it’s design and handling.  To be specific, it’s very reminiscent of the military M4 with the quad rail.  The gun uses a mil spec AR15 buffer tube and comes with an M4 style adjustable stock.  Naturally, this is easily replaceable with any AR15 stock that will fit a mil spec buffer tube.  The gun actually uses an AK47 style pistol grip, but it’s a plastic aftermarket model that feels more like an AR15 grip than an AK47 grip.  Again, this is easily replaceable with any AK47 style pistol grip.  The safety is the other deviation from true AR15 ergonomics, and can be found inside the trigger guard.

The all new floating hammer system in the Concept Lite is combined with a true HUMA regulator.  This combination is very efficient and delivers consistent velocities.  On full power, the .22 caliber version I used for this review averaged roughly 45 shots “on the reg” with about a 15ish fps extreme spread over the entire shot string.  That’s not bad!  You can see the picture below for an average string from a full fill.  There is a multi step power adjuster on the gun, and I highly suggest you try it!  We’ll get to why that is a little later.  With the JSB 18.13gr pellets and on full power, the gun produced an average of about 27fpe.

The trigger on the airgun is a nice two stage design that is fully adjustable.  I tested the out of the box pull on several models and found an average of 1.5-2lbs.  The enlarged “tactical” bolt handle is very easy to find and use.  The gun has a fully shrouded barrel that helps with keep the noise down, but it also has a 1/2 x 20 UNF threaded muzzle.  This makes attaching a moderator or other muzzle device a breeze. Both a 10 shot rotary magazine and a single shot tray ship with the gun, and it’s covered by a three year warranty. 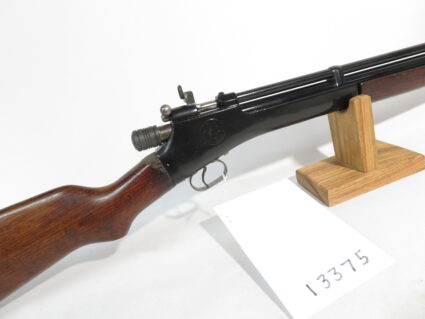 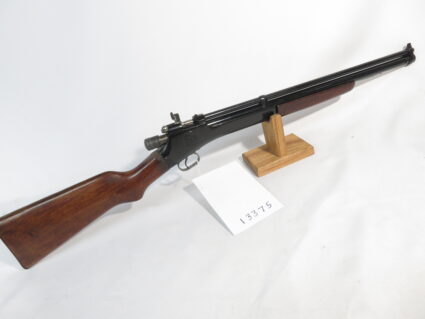 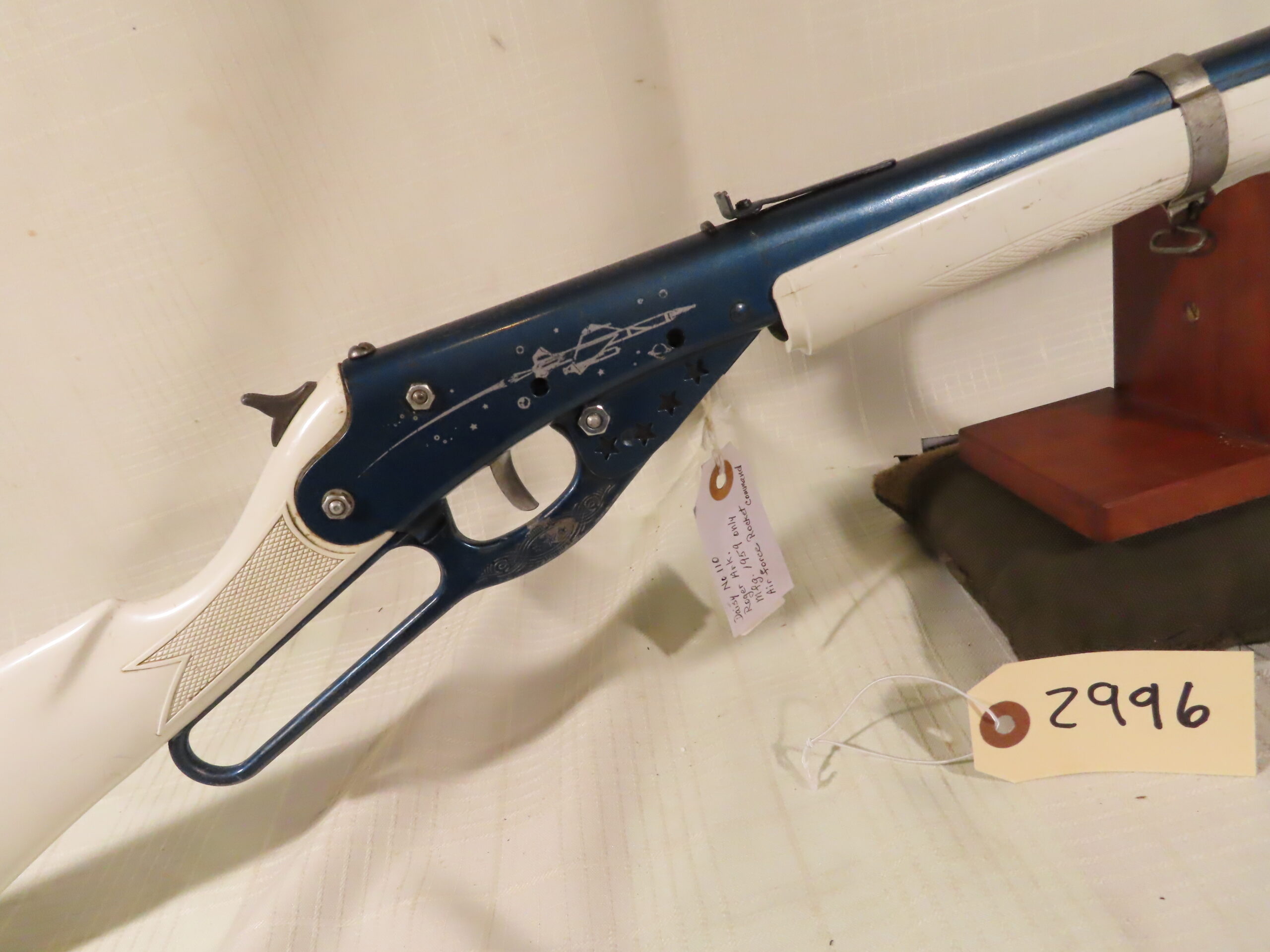 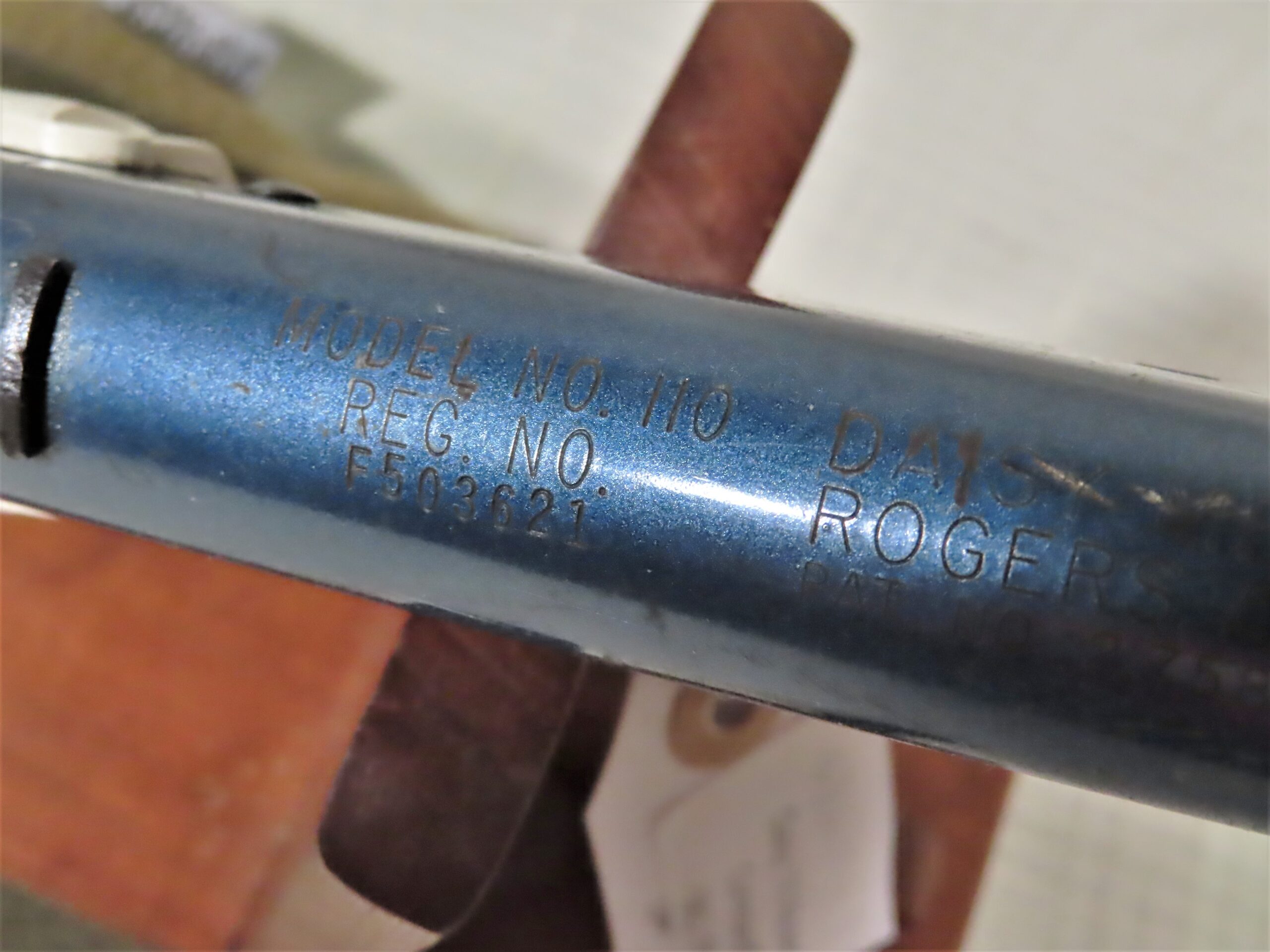 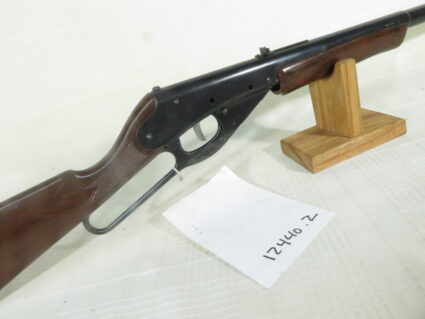 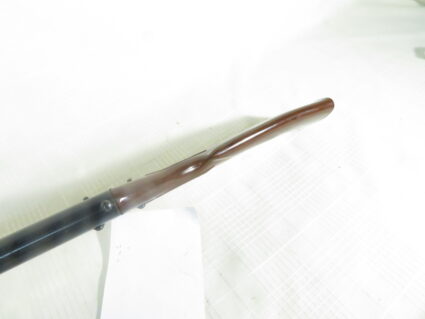 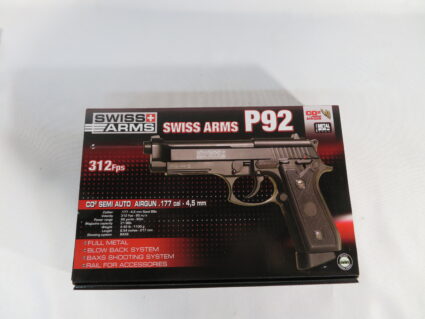 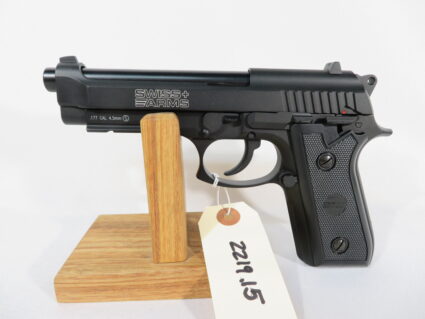 0 out of 5
0 review(s)
$120.00
Swiss Arms P92 Air Pistol in the Original Box Used Like New Condition Includes extra magazine BB Caliber 312 fps 21 shot magazine C02 Blow Back Action Sold as a collectors item. Untested. Sold ” as is”. No returns Not...

The German made barrel is slightly choked and is capable of wonderful accuracy.  I used the JSB 18.13gr pellets for my testing and discovered something profound during the process.  The particular gun I tested did not like being up at full power.  I must have shot a dozen 5 shot groups at 50 yards on full power and never got better than about a 5/8″ group.  That’s….well….ok…but far from stellar.  Then I made a mistake and shot it down off the reg.  While the point of impact lowered, so did the size of the group…and I mean CONSIDERABLY!  Below you will see two pictures.  One is an average group on full power, and the other is an average group with the adjuster one notch down from full power.  The difference is just amazing.  I’ll take the slight reduction in power for that increase in accuracy any day.

The Brocock Concept Lite is a great little package that can be used for many things.  It’s small, lightweight, and handy.  It can be adjusted to fit most any shooter, and adapted further by swapping parts.  It’s versatility is second to none via the removable rail sections where you can mount most any airgun accessory you might need.  The trigger is nice out of the box, but again, fully adjustable.  The shroud keeps it pretty quiet, and the threaded muzzle would just love to have a moderator attached to it for truly stealthy operations.  When tuned properly, the gun is capable of superb accuracy….and that is the biggest take-away from all of this.  If the gun suits your needs, check out bakerairguns.com for more!

If you’re like me, Made In America means something to you.  Sure, other countries can produce some fine goods…but when there is something exceptional made right here in the good old USA…that’s the one I want.  The American Air Arms EVOL is one of those exceptional things made here in America….and yes….I want one!  The … END_OF_DOCUMENT_TOKEN_TO_BE_REPLACED
Read More »

Leave it to FX Airguns to take a fantastic gun and make it better.  This is surely the case with the new Wildcat MkIII BT.  BT meaning that the gun now has a carbon fiber bottle, but that’s not the only improvement made.  The new BT also now has two AMP regulators and the same … END_OF_DOCUMENT_TOKEN_TO_BE_REPLACED
Read More »

Every once in a while, a combination of things that have existed for some time come together and are so good that you ask yourself why you haven’t been doing this already.  I think this is the case with the airgun and the LPVO, or Low Powered Variable Optic.  If you make that a semi-automatic … END_OF_DOCUMENT_TOKEN_TO_BE_REPLACED
Read More »

Hi everybody.  Today’s review is on the new flagship scope from Hawke…the Frontier 34 SF ZS FFP.  The acronyms stand for Side Focus, Zero Stop, and First Focal Plane.  The 34 stands for the massive 34 millimeter main tube.  The scope has all of these attributes, and many more.  With a price tag into the … END_OF_DOCUMENT_TOKEN_TO_BE_REPLACED
Read More »

Hi everyone.  This article is going to show you how I set up a gun for field target competition.  Specifically, for Hunter Field Target.  There are different classes in field target, and Hunter is by far the most popular class.  It’s also where I’d recommend starting out if you’re new to field target.  I wrote … END_OF_DOCUMENT_TOKEN_TO_BE_REPLACED
Read More »

I’d bet a dollar that most of us airgunners started with a multi-pump when we were kids.  I know I did.  The Daisy 880 and the Crosman 1377 were my first two.  Many more followed, and I literally cannot even guess how many thousands and thousands of shots I’ve taken with a multi-pump airgun.  Perhaps … END_OF_DOCUMENT_TOKEN_TO_BE_REPLACED
Read More »
Loading...