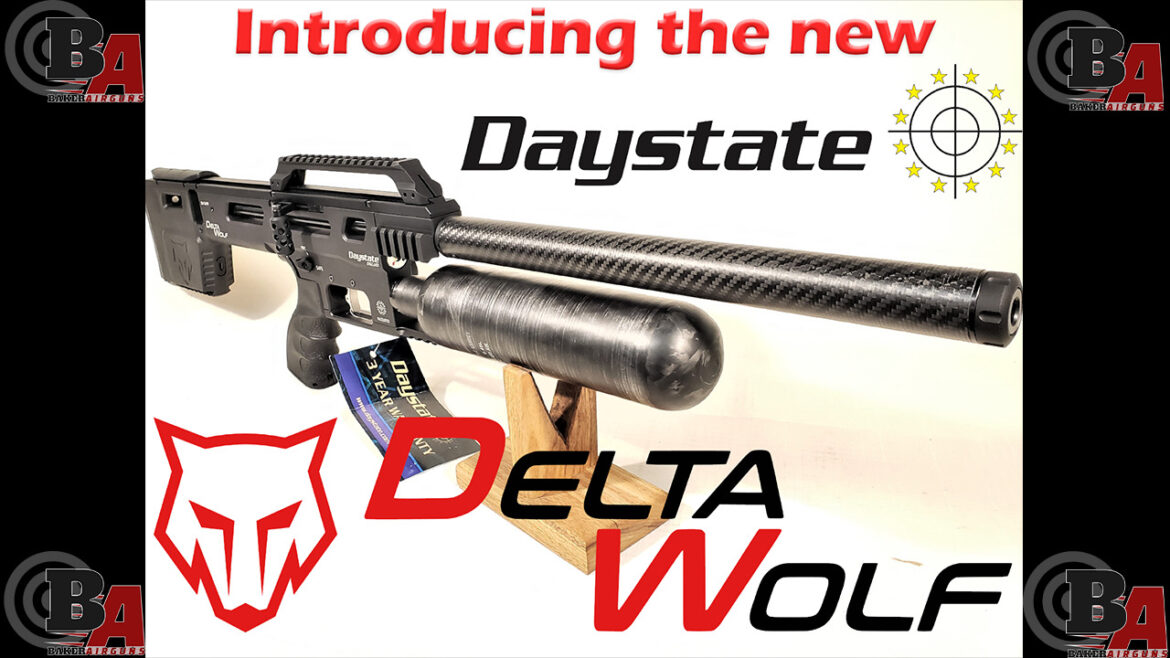 We’ve heard about it for a year now.  The technical details dripped down to us like rainwater.  We were told some things that seemed outrageous…if not impossible.  Does the new Daystate Delta Wolf really have a chronograph built into the shroud?  Does it really have a multi-function touch screen that is used to adjust the parameters of the gun’s firing cycle?  Is it really a mechanical Huma regulated gun with an electronic fire control group…sort of like a hybrid Wolverine R/Red Wolf with that top of it’s class electronic Red Wolf trigger?  The answer to all of these questions is….yes….and THEN SOME!  The link below is to the FULL REVIEW VIDEO that accompanies this article.  I suggest taking them both in for the full story.

The Delta Wolf  is a bullpup style PCP air rifle of the highest order.  As I said, it uses a hybrid electro-mechanical firing system.  Yes, it has a mechanical Huma regulator…but also yes…it has a computer controlled electronic hammer/valve system as well as an electronic trigger.  It has a touch screen interface, pressure sensors, capacitors, a solenoid, a built in chronograph with display, and more.  Daystate calls this AVT, or Advanced Velocity Technology.  All of these things work together to give you what is now the single most consistent shot velocity I have ever seen in any airgun.  Granted, it took some experimentation and adjustment until I got it to become so.  As noted in the title, this is a “Part One” type of review.  It’s an introduction for now.  I will delve more into the specifics in future videos and articles.  There we will discuss the multi-function display, adjustment parameters, what those parameters mean in simple terms, and how to make the most of them.

I played with both a .25 and .30 Delta Wolf for this review.  In both cases, the “Factory Shot Settings” weren’t nearly as good as the “Advanced Shot Settings.”  The factory settings are perfectly useable, but if you really want to wring all there is to have out of the Delta Wolf…you’re going to need to get into the advanced settings mode and play around.  Precision Airgun Distribution, the importer of the Delta Wolf and all other Daystate products here in the USA, has included some presets for you in the advanced settings mode.  These are designated by caliber and pellet weight.  For instance, they included a “3044” preset that stands for 30 caliber 44.75gr pellet.  These are a pretty good starting point, and definitely better than the factory presets.  Still, I found that through experimentation…I could improve on even these presets.  For the 30 caliber Delta Wolf that I used for most of this review, I found that by using the “Warp” preset in the advanced settings but changing the regulator pressure to 135BAR…I would consistently get about 35 shots at 905fps average using UNSORTED JSB 44.75gr pellets with a single digit extreme spread over the entire shot string.  In fact, the HIGHEST extreme spread I saw was 7fps.  You read that correctly.  The HIGHEST extreme spread I saw was 7fps.  That is INSANE consistency, and simply the best that I’ve ever seen. 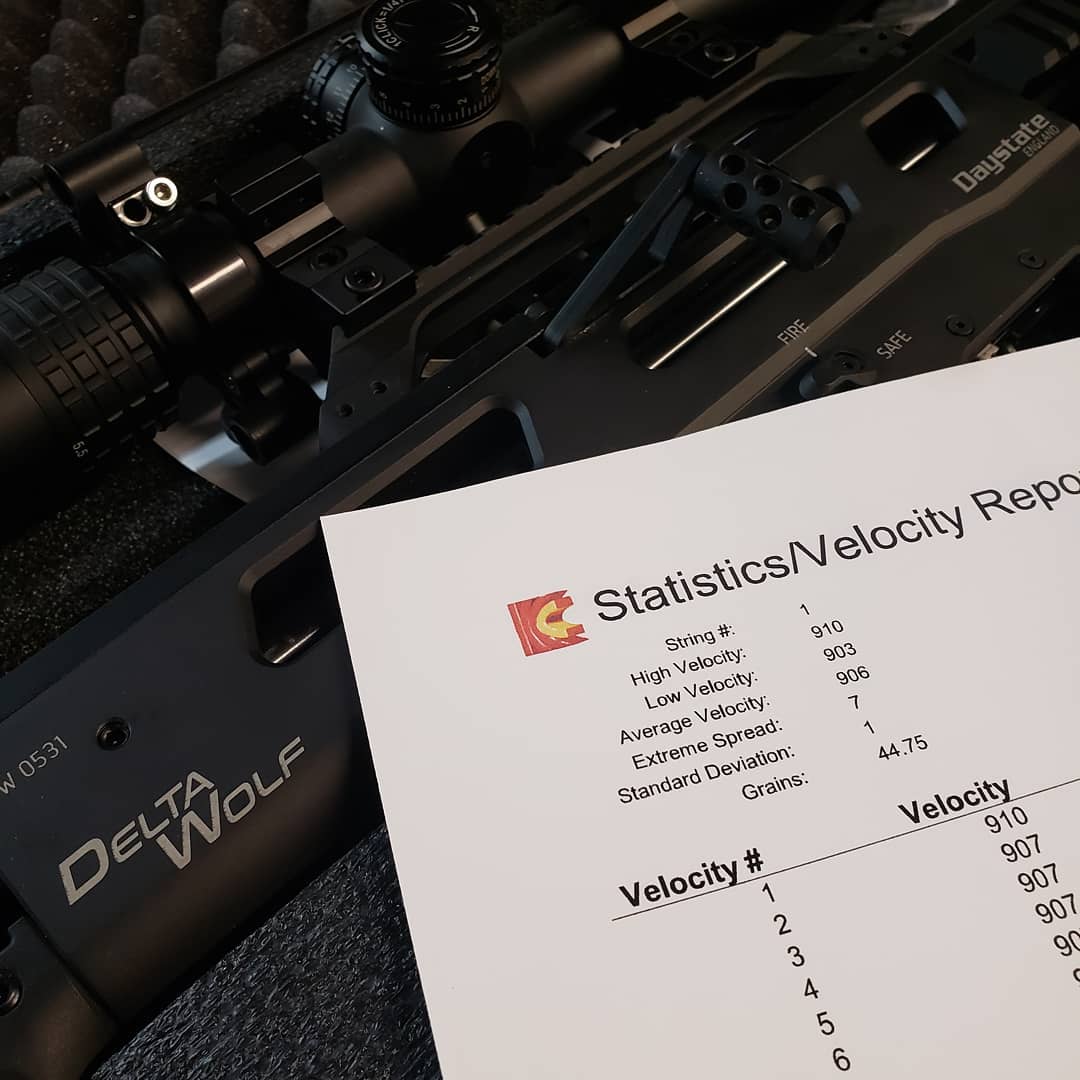 So now….about that trigger.  Much like the Daystate Red Wolf, the trigger on the Delta Wolf isn’t actually a trigger.  It’s a switch that’s designed to look and act like a trigger…only better.  After testing two examples of the gun for stock trigger pull, I’m getting a bit less than a pound.  Right about 15 ounces.  They come set to simulate a two stage trigger.  There is an easy first stage pull, a solid wall, and then zero creep when the second stage breaks like a glass rod.  On the 30 caliber version (which I hope to keep) I set the trigger to just about 8 ounces with a slightly shorter first stage.  For me, it’s heaven.  Naturally…it is fully adjustable to suit any tastes.

There are still more noteworthy features fit for this introduction to the Delta Wolf.  Not least of which would be that the gun is fully ambidextrous.  By this I mean that the cocking lever, the cheek piece, and the safety can be used with either hand.  This gun nails the ambi-type AR15 safety.  It’s on both sides of the gun and has a long lever on one side and a short lever on the other.  These can be swapped to either side as you see fit.  The magazine can also be inserted from either side.  What’s more is that you can magnetically attach two magazines “bottom to bottom.”  This means that you can push one mag in from one side and shoot all of it’s pellets.  Then, without removing either, you can push the other one in from the other side…thus doubling your shots.  There are also five picatinny rails on the gun.  One on the bottom in front of the trigger guard, one on each side, one on the underside of the buttstock, and one on top for your optics.  The optics rail can be adjusted anywhere on the top dovetail track of the gun to really fine tune your eye relief.  I absolutely love this feature.  The chronograph, which displays on the touch screen, is housed in a carbon fiber shroud that terminates in M20x1 threads for attaching accessories.  Sorry guys…but your 1/2×20 UNF moderators will not fit the Delta Wolf.

I know.  Iiiiiiiiiiiiiiiiiiiiiiii know!  “What about accuracy?”  In a nutshell….WOW!  I have finally found an indoor 100yd range to use.  It’s the Midwest Shooting Center in nearby Lima, Ohio.  While I’m still ironing out how to record good video in there, having a windless 100 yard range is just the bee’s knees.  It’s a fantastic facility, and I highly recommend visiting if you’re in the neighborhood.  I brought a good friend, and fellow Marine, with me for my accuracy testing.  We both shot the gun, and were both astounded by the accuracy of the Delta Wolf.  We both agreed that it is unquestionably one of the most accurate air rifles that either of us have ever fired.  Keep in mind, this was the first time that either of us had really shot this gun.  Long story short, whether he shot it or I shot it….our groups averaged about 0.5MOA.  That’s a half an inch at 100yards.  Some guns can do this, but this one did it repeatedly…and with the greatest of ease.

As with anything in life, there are both pros and cons.  With compliments…there must also be gripes.  I have but two gripes about the Delta Wolf.  Firstly…the name.  This gun has been named incorrectly.  It should have been called the “Alpha Wolf.”  It is very much the leader of the pack, and deserves to be referred to as such.  Second is the price.  The Delta Wolf is not cheap.  You can expect to pay north of $3000 for one.  The black version ($3019) is cheaper than the bronze version ($3419) by a significant margin….but neither are cheap when compared to their competitors.  Then again, a Ferrari isn’t cheap….but you want one of those too.  Don’t you?

I thank you for reading this article, and hope that you’ve found it useful and informative.  Stay tuned for Part Two of the Daystate Delta Wolf review…COMING SOON!

If you’re like me, Made In America means something to you.  Sure, other countries can produce some fine goods…but when there is something exceptional made right here in the good old USA…that’s the one I want.  The American Air Arms EVOL is one of those exceptional things made here in America….and yes….I want one!  The … END_OF_DOCUMENT_TOKEN_TO_BE_REPLACED
Read More »

Leave it to FX Airguns to take a fantastic gun and make it better.  This is surely the case with the new Wildcat MkIII BT.  BT meaning that the gun now has a carbon fiber bottle, but that’s not the only improvement made.  The new BT also now has two AMP regulators and the same … END_OF_DOCUMENT_TOKEN_TO_BE_REPLACED
Read More »

Every once in a while, a combination of things that have existed for some time come together and are so good that you ask yourself why you haven’t been doing this already.  I think this is the case with the airgun and the LPVO, or Low Powered Variable Optic.  If you make that a semi-automatic … END_OF_DOCUMENT_TOKEN_TO_BE_REPLACED
Read More »

Hi everybody.  Today’s review is on the new flagship scope from Hawke…the Frontier 34 SF ZS FFP.  The acronyms stand for Side Focus, Zero Stop, and First Focal Plane.  The 34 stands for the massive 34 millimeter main tube.  The scope has all of these attributes, and many more.  With a price tag into the … END_OF_DOCUMENT_TOKEN_TO_BE_REPLACED
Read More »

Hi everyone.  This article is going to show you how I set up a gun for field target competition.  Specifically, for Hunter Field Target.  There are different classes in field target, and Hunter is by far the most popular class.  It’s also where I’d recommend starting out if you’re new to field target.  I wrote … END_OF_DOCUMENT_TOKEN_TO_BE_REPLACED
Read More »

I’d bet a dollar that most of us airgunners started with a multi-pump when we were kids.  I know I did.  The Daisy 880 and the Crosman 1377 were my first two.  Many more followed, and I literally cannot even guess how many thousands and thousands of shots I’ve taken with a multi-pump airgun.  Perhaps … END_OF_DOCUMENT_TOKEN_TO_BE_REPLACED
Read More »
Loading...