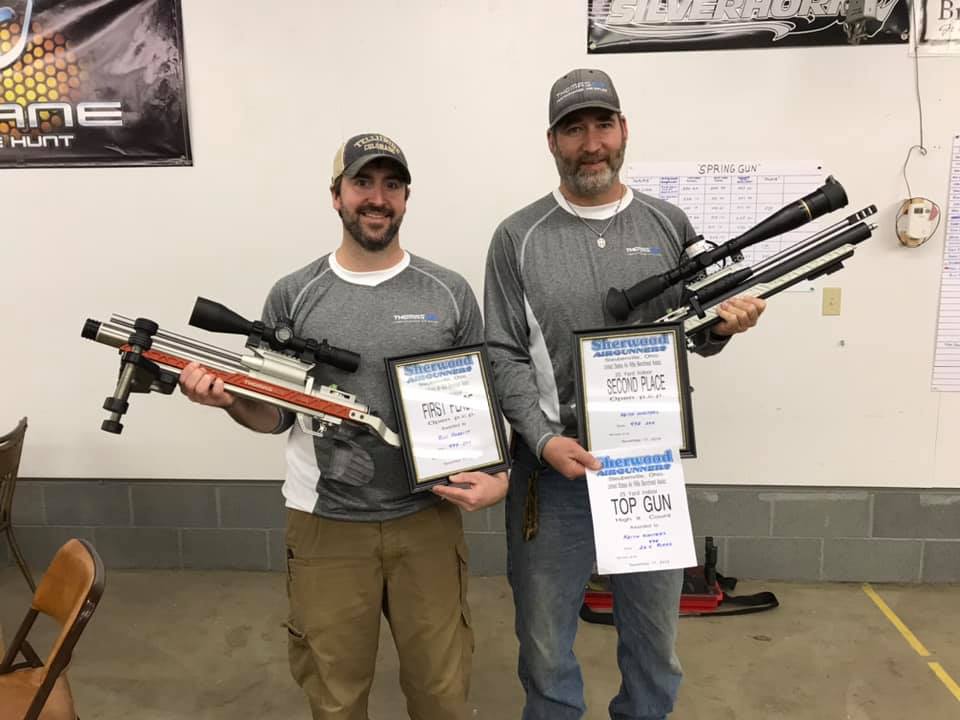 Sherwood Air Gunners hosted their first Bench Rest shoot of the season this weekend  and the consensus was that everyone had a good time and the fellowship in the Ohio area air gunners group was top notch as is always the case!  Shooters from Northeast Ohio Air gunners , Central Ohio Air gunners and Sherwood Air gunners were all present  as well as shooters from Pennsylvania  and a few new  faces from the surrounding areas!!  The Sherwood club would like to thank everyone for supporting our shoots this being our third year having them.  Another shoot is planned in either  January or early February of 2020. It’s a nice way to get together and shoot our rifles for a bit of friendly competition when the weather only permits shooting indoors!!  Always warm at the range at Sherwood!!

This year the Spring gun division was given a boost in as the first place prize was a beautiful F.W.B.300S target rifle donated by one of the Sherwood members to try to boost the numbers of spring gun shooters in the class !  We had 10 shooters compete for the rifle With 80 year old Al Duster from Brookville Pa. dominating the field shooting a Wather LGU taking home the rifle, He bested the field by shooting a 240-9x/ 238-1x for a total of 478-10x total out of a possible 500 points. Second place was taken by Ron Heckathorne  of Washington Pa. shooting a beautiful  F.W.B. Running Boar rifle with the score of 233-1x /238-4x 471-5x total followed by Dan Putz who was shooting his first bench rest shoot and he shot from a bucket and sticks hunter field target style!!!  His score was 234-4x/236-1x 470-5x total shooting his trusty Walther LGV break barrel he used to dominate the Pyramyd  Cup Field Target match this past summer.  Great  Shooting  all of you!!

The PCP division was highly contested as always with the scores being high and close! Two familiar faces both shooting Thomas Carbines were at the top of the pile of the eighteen shooters in the class with a highly modified Benjiman  Maurader  taking the third place! Only one point separating the three of them!   Bill Rabbitt   came out smoking with a 250-10x on his first card of the day and posted a 249-15-x for the second card for a total of 449-25x out of a possible 250 points for the number one position. Second and third place was decided by x count with Keith Walters edging out Ron Heckathorne  with both shooters posting pairs of 449 cards, Keith having 26-x’s and Ron close behind with 20-x’s   Keith also took home the Top Gun Award for the highest x count of the match.  Another perfect 250 card was shot by   Tim Baylor of Cleveland Ohio.  For those not familiar with the USARB   Indoor target the  ten  ring is only 2 mm in size and shooting 25 shots in a row hitting it 25 times is no small feat!!

We had  four new shooter in the fray, Gary Rudolph and Kenny  Deisch  from north of Columbus and Mike  Burky  from the Coshocton  area of Ohio and a local Jerry McCombs who all shot well and hopefully will become a part of the area air gun family!!  Thank’s   for  coming  over  to shoot guy’s!!!   Hope we see you again soon!

All results listed below: 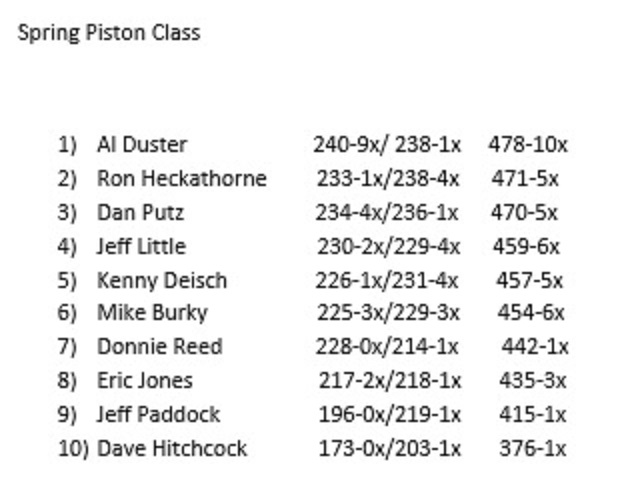 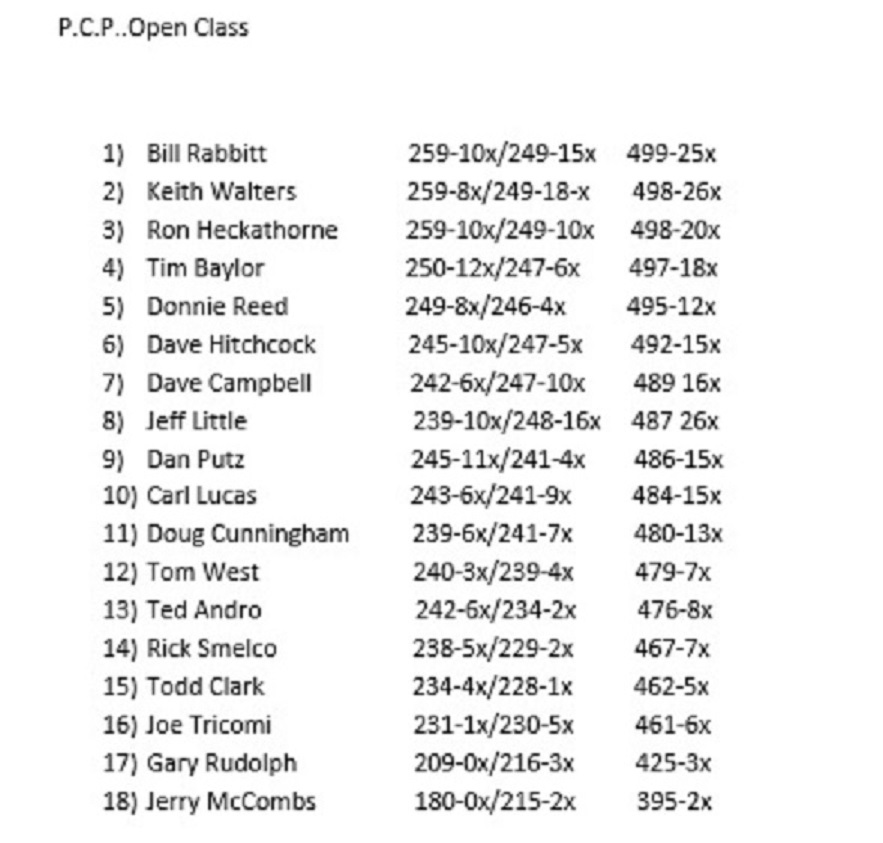 Hoping everyone had a good time and wants’ to do it again in January or early February!  Also hoping  everyone has a Happy and safe Holiday Season!!   See you all in 2020!!

If you’re like me, Made In America means something to you.  Sure, other countries can produce some fine goods…but when there is something exceptional made right here in the good old USA…that’s the one I want.  The American Air Arms EVOL is one of those exceptional things made here in America….and yes….I want one!  The … END_OF_DOCUMENT_TOKEN_TO_BE_REPLACED
Read More »

Leave it to FX Airguns to take a fantastic gun and make it better.  This is surely the case with the new Wildcat MkIII BT.  BT meaning that the gun now has a carbon fiber bottle, but that’s not the only improvement made.  The new BT also now has two AMP regulators and the same … END_OF_DOCUMENT_TOKEN_TO_BE_REPLACED
Read More »

Every once in a while, a combination of things that have existed for some time come together and are so good that you ask yourself why you haven’t been doing this already.  I think this is the case with the airgun and the LPVO, or Low Powered Variable Optic.  If you make that a semi-automatic … END_OF_DOCUMENT_TOKEN_TO_BE_REPLACED
Read More »

Hi everybody.  Today’s review is on the new flagship scope from Hawke…the Frontier 34 SF ZS FFP.  The acronyms stand for Side Focus, Zero Stop, and First Focal Plane.  The 34 stands for the massive 34 millimeter main tube.  The scope has all of these attributes, and many more.  With a price tag into the … END_OF_DOCUMENT_TOKEN_TO_BE_REPLACED
Read More »

Hi everyone.  This article is going to show you how I set up a gun for field target competition.  Specifically, for Hunter Field Target.  There are different classes in field target, and Hunter is by far the most popular class.  It’s also where I’d recommend starting out if you’re new to field target.  I wrote … END_OF_DOCUMENT_TOKEN_TO_BE_REPLACED
Read More »

I’d bet a dollar that most of us airgunners started with a multi-pump when we were kids.  I know I did.  The Daisy 880 and the Crosman 1377 were my first two.  Many more followed, and I literally cannot even guess how many thousands and thousands of shots I’ve taken with a multi-pump airgun.  Perhaps … END_OF_DOCUMENT_TOKEN_TO_BE_REPLACED
Read More »
Loading...