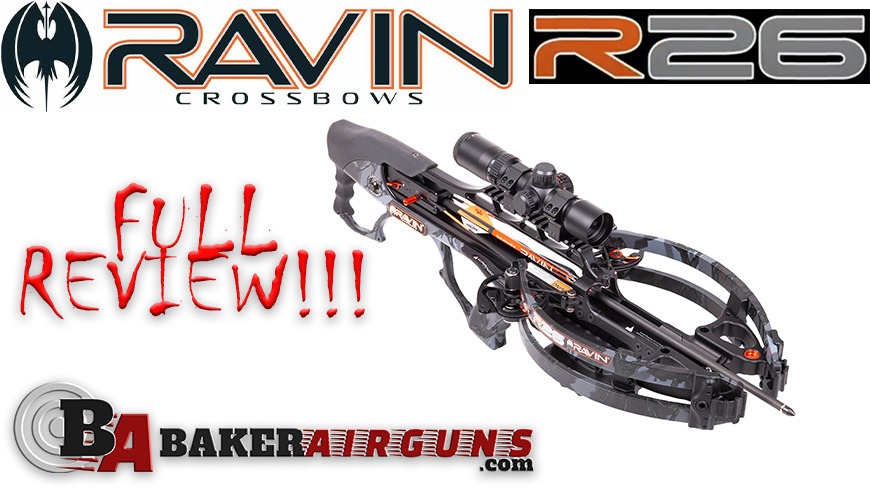 I don’t like crossbows.  Never have.  I’ve owned several, and got rid of every last one of them.  The trouble is, I could shoot a compound bow more accurately than I’ve ever shot with any of the crossbows I’ve owned.  That is, until I tried the Ravin R26.  The Ravin R26 is, hands down, the single most accurate crossbow I’ve ever shot…and I love it.  I WANT ONE!  The R26 comes as a ready to hunt package that includes the bow, a very nice 4×32 scope with illuminated reticle and speed ring, a quiver and mounting bracket, cocking handle, and six arrows.  Just add your favorite broadheads and you’re ready to hunt.  The link below is to the full review video that accompanies this article.  I suggest taking them both in for the full story.

The Ravin R26 is a top of the line crossbow of the highest order.  It is the smallest, lightest crossbow that Ravin makes.  How small?  It is 26″ in overall length…it’s 9.25″ wide uncocked…and 5.75″ wide when cocked.  That is very small for a full power crossbow.  How light is it?  It is 6.5lbs.  Again, that is very light for a full power crossbow.  It’s small size mean that it’s maneuverable in a ground blind or tree stand, and won’t get caught on every branch and piece of brush in the deer woods.  It’s light weight means that you can carry it all day long and barely notice that it is there.  This is quite appealing to any hunter, and one of the standout features of the R26. 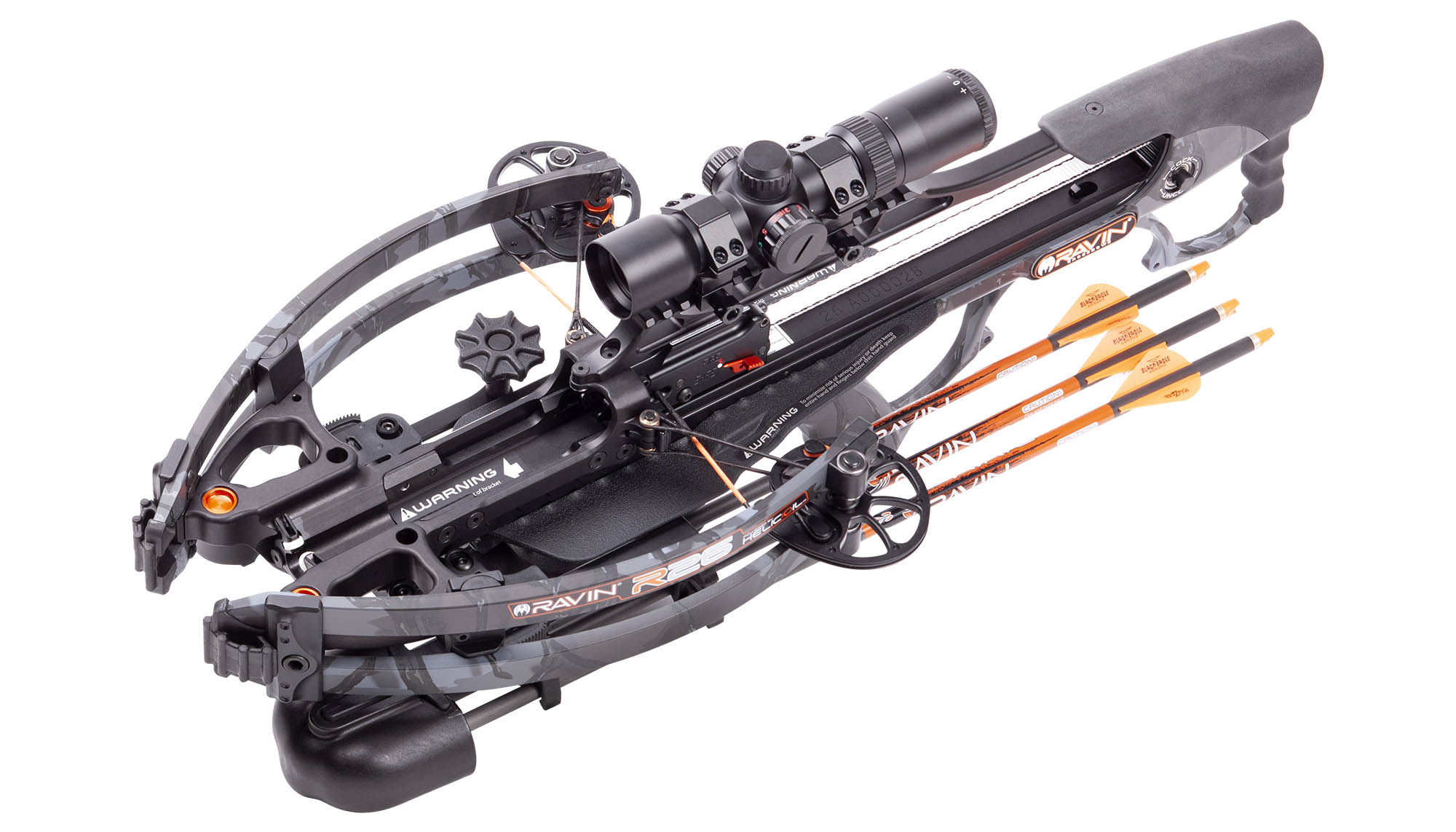 Another standout feature is the cocking effort, or rather, the lack of it.  The R26 has a built in crank system that requires only 12 pounds of cocking effort despite the fact that it’s a 340lb draw weight crossbow.  It comes with a removable cocking handle that is easily stowed on the quiver mounting bracket until you need it.  I demonstrate the cocking (and uncocking) procedure in the video linked above, but for those that only want to read this….let me assure you that it couldn’t be easier.  The cranking system uses a ratchet which makes the process completely safe.  At no time are you restraining the cocking carriage with muscle power during the cocking process.  That is, unless you want to.  Why would you want to?  Because if you push the carriage release button and hold it during cocking, the process is completely silent.  Keep in mind, even when you choose to do this…you’re only holding 12 pounds.  This is also how you uncock the crossbow.  Just hold in the carriage release button and unwind the lever.  This feature gives anybody the ability to shoot this massively powerful crossbow.  Gone are the days when the ability to cock the crossbow with a traditional rope cocker would dictate whether or not you could shoot one.  This is huge, in my opinion.  Not to mention, it makes shooting the crossbow easier and more fun…even if you could use a rope cocker.

As I said, the R26 is a 340lb draw weight bow.  It has a 9.5″ power stroke, and will propel a 400gr arrow at a legitimate 400fps.  That makes 142ft-lbs of kinetic energy, which is more than enough to hunt any game animal in North America.  Using the right arrow, it’s enough energy to hunt any game animal on Earth.  When I say the diminutive R26 is a full power crossbow, I mean it.  In fact…if you buy one…I would highly recommend that you get a target that is rated for 400+ fps arrows…but also one that is designed for easy arrow removal.  I nearly threw my back out trying to remove the arrows from my target.

Using the scope, you will find that the Ravin R26 is absurdly accurate with the included Ravin 400gr arrows.  Unfortunately, it was extremely windy on the day I set up for my accuracy testing.  The weatherman said it was 15mph average with 20+mph gusts.  Regardless, I had to do the testing that day.  Despite the terrible shooting conditions, I was able to shoot 3 separate 5 shot groups at 50 yards that were all right about 1.25″.  That is impressive, and the very best results I’ve ever seen from a crossbow at 50yards.  If I were to try again on a relatively windless day, I would have to do it at 100 yards just to keep from destroying my arrows via Robin Hood shots.  In fact, I intend to.  Stay tuned for that video.

Like I said earlier, I used to not like crossbows at all.  Now, I’m in love with one.  The  Ravin R26 is easy to shoot, extremely accurate, and an absolute joy to carry around.  Let’s not forget that it’s also massively powerful.  The R26 has changed my mind about crossbows.  I can’t wait to try the other offerings from Ravin, as well as from Centerpoint.  I’ve got a Centerpoint CP400 in line for review next.  There are many similarities between the Ravin and Centerpoint crossbows, such as the Helicoil technology and the ability to cock it via a crank system.  If you’re in the market for a crossbow…I would highly recommend checking out the Ravin R26 before deciding on one.  We have these in stock here at Baker Airguns, and there are more on the way.

If you’re like me, Made In America means something to you.  Sure, other countries can produce some fine goods…but when there is something exceptional made right here in the good old USA…that’s the one I want.  The American Air Arms EVOL is one of those exceptional things made here in America….and yes….I want one!  The … END_OF_DOCUMENT_TOKEN_TO_BE_REPLACED
Read More »

Leave it to FX Airguns to take a fantastic gun and make it better.  This is surely the case with the new Wildcat MkIII BT.  BT meaning that the gun now has a carbon fiber bottle, but that’s not the only improvement made.  The new BT also now has two AMP regulators and the same … END_OF_DOCUMENT_TOKEN_TO_BE_REPLACED
Read More »

Every once in a while, a combination of things that have existed for some time come together and are so good that you ask yourself why you haven’t been doing this already.  I think this is the case with the airgun and the LPVO, or Low Powered Variable Optic.  If you make that a semi-automatic … END_OF_DOCUMENT_TOKEN_TO_BE_REPLACED
Read More »

Hi everybody.  Today’s review is on the new flagship scope from Hawke…the Frontier 34 SF ZS FFP.  The acronyms stand for Side Focus, Zero Stop, and First Focal Plane.  The 34 stands for the massive 34 millimeter main tube.  The scope has all of these attributes, and many more.  With a price tag into the … END_OF_DOCUMENT_TOKEN_TO_BE_REPLACED
Read More »

Hi everyone.  This article is going to show you how I set up a gun for field target competition.  Specifically, for Hunter Field Target.  There are different classes in field target, and Hunter is by far the most popular class.  It’s also where I’d recommend starting out if you’re new to field target.  I wrote … END_OF_DOCUMENT_TOKEN_TO_BE_REPLACED
Read More »

I’d bet a dollar that most of us airgunners started with a multi-pump when we were kids.  I know I did.  The Daisy 880 and the Crosman 1377 were my first two.  Many more followed, and I literally cannot even guess how many thousands and thousands of shots I’ve taken with a multi-pump airgun.  Perhaps … END_OF_DOCUMENT_TOKEN_TO_BE_REPLACED
Read More »
Loading...