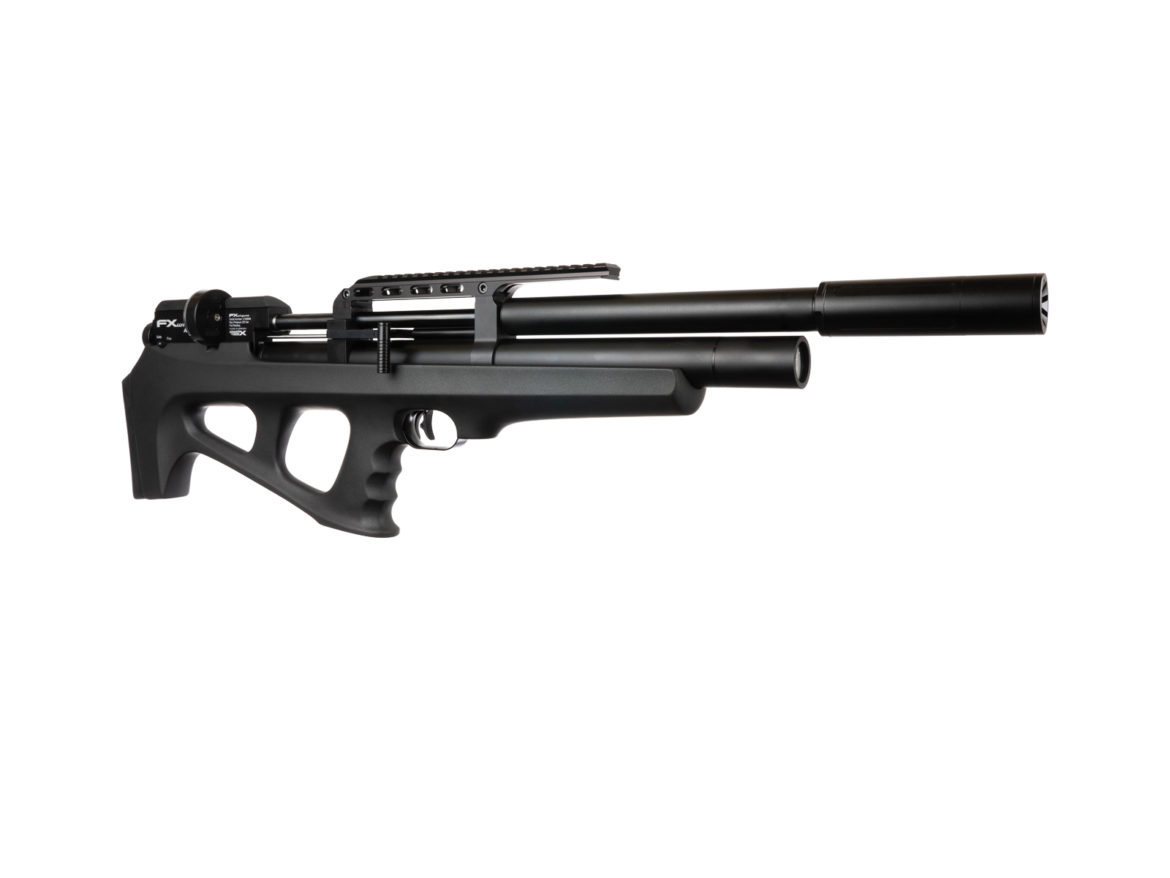 The FX Wildcat is unquestionably one of the most popular bullpup air rifles ever made…and for good reason.  It’s ergonomics are second to none.  It is both powerful and extremely accurate.  The gun has received several upgrades in it’s lifetime, including both a Mk I and Mk II version.  It was always a good airgun, but only got better as time went on.  In keeping with that tradition, FX has again improved the Wildcat.  I give you the FX Wildcat Mark III.  The link below is to the full video review.  I suggest taking that in as well for the full story.

So what’s new?  How could FX improve an already outstanding platform?  I’m glad you asked.  How about the capability to use the same Sideshot magazines as the Crown and Dreamline?  That’s right.  The Wildcat MkIII  has done away with the round, (relatively) low capacity metal magazines of it’s predecessors.  Don’t get me wrong, those old mags worked fine…but who doesn’t like more time shooting and less time reloading?  You’ll now get 21 shots in .177, 18 shots in .22, 16 shots in .25, and 13 shots in .30.  That’s a big improvement.

The Wildcat MkIII is also more adjustable than the older versions.  The gun now sports a hammer spring adjuster on the rear of the breech.  It’s similar to the adjuster on other FX guns, with one major difference.  Like it’s brethren, it has predetermined notches for quick and easy adjustment.  It also has a screw adjuster for more precise adjustment.  One of the provided notches is labeled “ADJUST” and has a tiny hole underneath it.  That hole is so you can insert a 1.5mm allen wrench and turn the adjuster inside the gun.  The difference between the Wildcat MkIII adjuster and other FX screw adjusters is the direction you need to turn it.  You actually turn this one counter-clockwise to increase the tension.  I figured that one out the hard way. 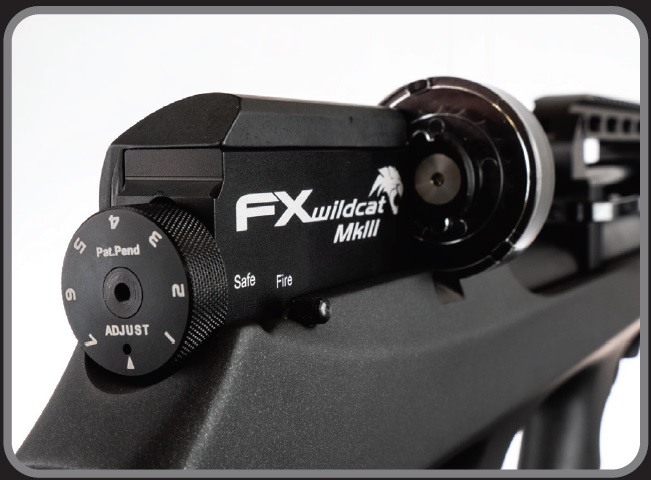 The gun retains the externally adjustable AMP regulator, but now includes an updated valving system as well as a larger plenum space.  This means you can get more power, and seemingly more efficiency, out of the new MkIII.  I used the .22 caliber Compact version for this review.  As you can see in the chart below, with the gun tuned to 887fps/31.6ft-lb average, filled to the 250BAR max pressure at which the new gun operates, using JSB Exact Heavy 18.13gr pellets….I got 42 shots on the reg with a 10fps extreme spread and a standard deviation of only 2fps.  That is exceptionally consistent, especially for unsorted out of the tin pellets.  Naturally, you’ll get more shots with a more conservative tune, and less with a more fire-breathing one.

Speaking of fire-breathing, I also tuned the gun to the max to try out the FX Hybrid slugs.  Even with the small 500mm barrel of the Compact version, I easily got a 905fps/40ft-lb average with the 22 grain Hybrid Slugs.  Oh, and about that barrel….the Wildcat MkIII also sports the new and improved Superior Smooth Twist X barrel.  You get the 500mm barrel in the “Compact” version of the MkIII, and the 700mm version in the “Sniper” version.  You also get a 300cc reservoir in the Sniper compared to the 230cc reservoir in the Compact. Naturally, the longer barrel of the Sniper does make it more powerful than the Compact.  Below is a chart of the specifications of each version… 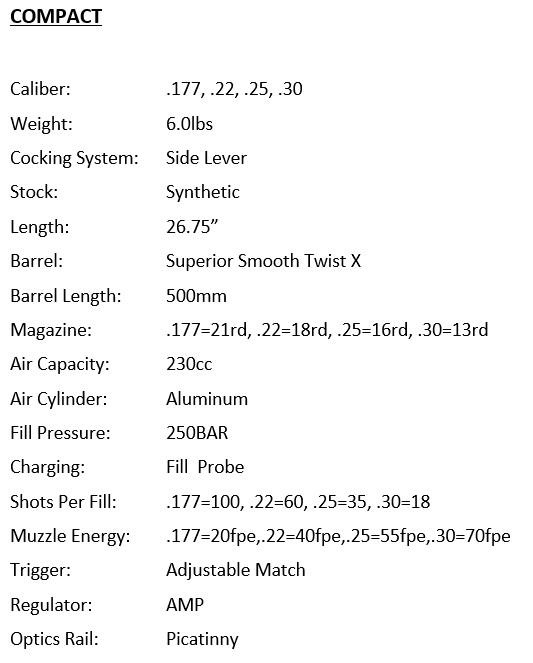 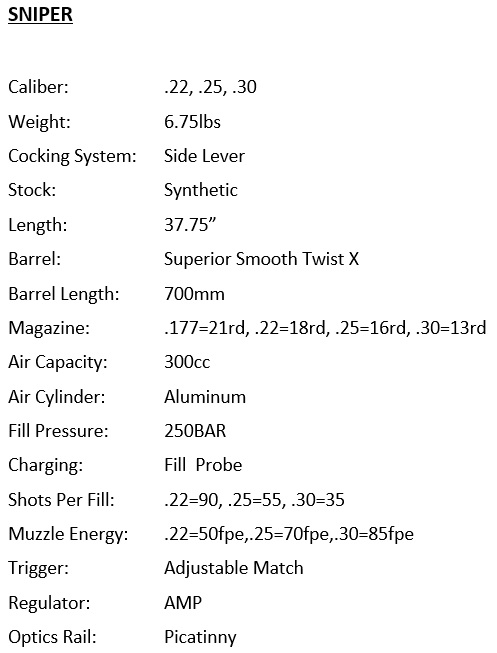 Another new feature for both versions of the new gun is a standard picatinny type rail on top for mounting your optics.  Most other things stay the same.  You still get the same ergonomic stock, the fully adjustable match grade trigger that is second to none so far as bullpup triggers go, and the smooth and well positioned side lever for cocking.  You’ll also get the ridiculous accuracy you’ve come to expect from an FX Wildcat.  Unfortunately, due to circumstances beyond my control…I had but one day to get all of the recording done for this report/video review.  As is the way in Ohio, the weather today was horrible.  It was cold, rainy, and windy.  The weather report for hour I used to record the 50 yard accuracy testing said the wind was 15mph steady with up to 29mph gusts.  It was also quite variable.  But….the show must go on!

So how did the Wildcat Compact do in these horrific shooting conditions?  In a word…exceptional!  First let me say that I am absolutely positive the wind affected my groups.  That is not an excuse, but rather a fact that we all must accept.  Even still, the Wildcat MkIII gave me sub-MOA five shot groups at 50 yards.  I used both the 22gr FX Hybrid Slugs, as well as the JSB Exact Heavy 18.13gr pellets for my testing.  I tuned the gun differently for each projectile.  Somehow, my groups for both were precisely the same size.  You’ll see lots of shots on the target due to the fact that I had to figure out the wind, as well as figure out my point of impact for two different projectiles with two different tunes.  Despite this, I still managed a 0.472″ group with both projectiles.  I tried to fire when the wind was weakest, and similar to my previous shots.  I’ve quite confident that under better environmental conditions, the gun is capable of even smaller groups with either projectile.

So does the Wildcat MkIII live up to the lineage it’s born from?  Unquestionably.  Is the gun simply changed, or is it improved?  Definitely the latter.  You get more power, more adjustability, more magazine capacity, and maybe even more accuracy.  The best part is that you lose nothing that you already love about the Wildcat.  Same awesome trigger, same awesome stock, same awesome interchangeable Smooth Twist X barrel system, same awesome sidelever, and that happy feeling you get knowing that you own one of the very best bullpups on the market.

If you’re like me, Made In America means something to you.  Sure, other countries can produce some fine goods…but when there is something exceptional made right here in the good old USA…that’s the one I want.  The American Air Arms EVOL is one of those exceptional things made here in America….and yes….I want one!  The … END_OF_DOCUMENT_TOKEN_TO_BE_REPLACED
Read More »

Leave it to FX Airguns to take a fantastic gun and make it better.  This is surely the case with the new Wildcat MkIII BT.  BT meaning that the gun now has a carbon fiber bottle, but that’s not the only improvement made.  The new BT also now has two AMP regulators and the same … END_OF_DOCUMENT_TOKEN_TO_BE_REPLACED
Read More »

Every once in a while, a combination of things that have existed for some time come together and are so good that you ask yourself why you haven’t been doing this already.  I think this is the case with the airgun and the LPVO, or Low Powered Variable Optic.  If you make that a semi-automatic … END_OF_DOCUMENT_TOKEN_TO_BE_REPLACED
Read More »

Hi everybody.  Today’s review is on the new flagship scope from Hawke…the Frontier 34 SF ZS FFP.  The acronyms stand for Side Focus, Zero Stop, and First Focal Plane.  The 34 stands for the massive 34 millimeter main tube.  The scope has all of these attributes, and many more.  With a price tag into the … END_OF_DOCUMENT_TOKEN_TO_BE_REPLACED
Read More »

Hi everyone.  This article is going to show you how I set up a gun for field target competition.  Specifically, for Hunter Field Target.  There are different classes in field target, and Hunter is by far the most popular class.  It’s also where I’d recommend starting out if you’re new to field target.  I wrote … END_OF_DOCUMENT_TOKEN_TO_BE_REPLACED
Read More »

I’d bet a dollar that most of us airgunners started with a multi-pump when we were kids.  I know I did.  The Daisy 880 and the Crosman 1377 were my first two.  Many more followed, and I literally cannot even guess how many thousands and thousands of shots I’ve taken with a multi-pump airgun.  Perhaps … END_OF_DOCUMENT_TOKEN_TO_BE_REPLACED
Read More »
Loading...