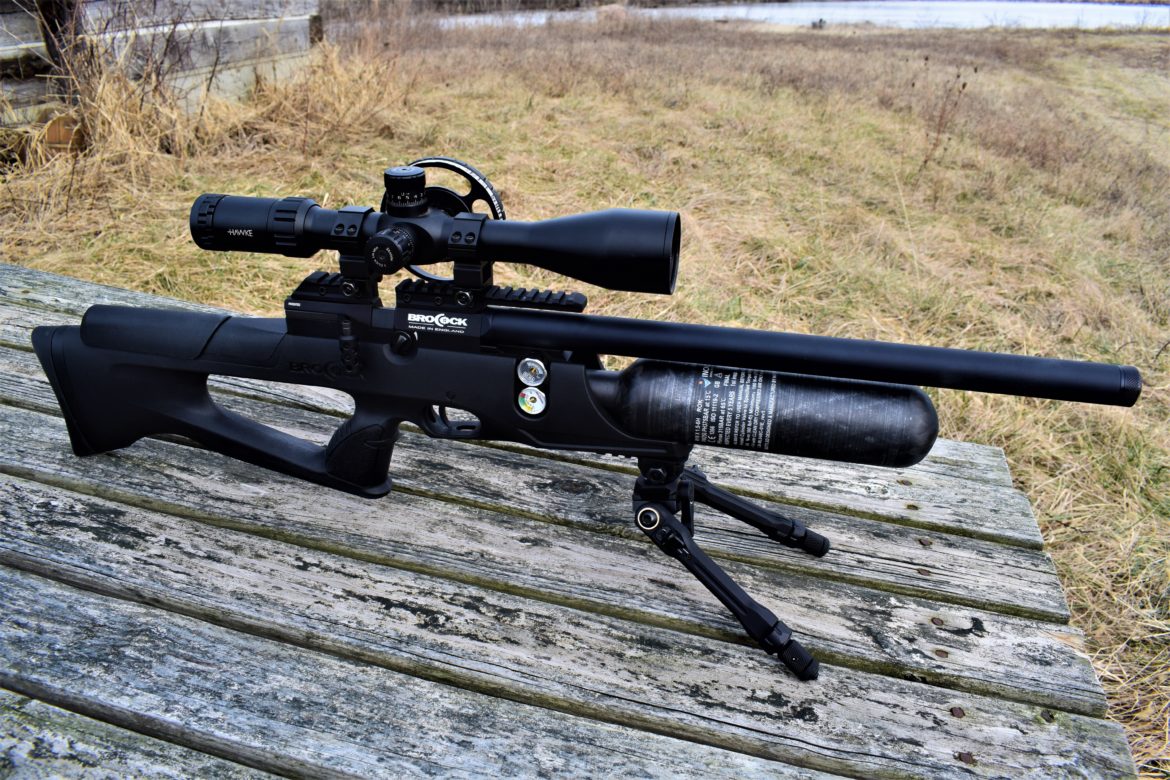 Let’s face it.  When given the choice, most of us prefer a side-lever to a bolt operated airgun.  Brocock realized this and now offers their XR line of airguns with a side-lever as well as a myriad of other improvements over their previous offerings.  In the XR line, you’ll find familiar names like Bantam, Sniper, Commander, and Concept.  These are all very similar to the earlier versions of the same name, but now with the improvements of the XR line.  Below is a link to the FULL REVIEW video that accompanies this written report on the Brocock Sniper XR.  I suggest taking both of them in for the full story.

The most obvious difference between the XR line and earlier guns is the side-lever.  Not all side-levers are created equal, and Brocock did a good job on theirs.  It’s reminiscent of the side-lever on my Daystate Wolverine R…and that’s really saying something!  Not so obvious are some other improvements such as a new choked Lothar Walther barrel, an improved trigger, and an updated Huma regulator/hammer/valve system.  Brocock is also touting the XR line as more precisely machined and now modular…meaning components of different model guns can be swapped with each other.

Our test gun is the .177 Sniper XR.  The gun retains the adjustable cheek piece and butt-pad, lower picatinny rail, 10 shot magazine, and dovetail to picatinny adapter on top for mounting optics.  It’s about 32″ long, weighs about 7.2lb, and has a 17″ barrel.  It has a stepped power adjuster, and a baffled full length shroud which terminates in 1/2x20UNF threading.  This will allow easy attachment of popular moderators, air strippers, or whatever you like with 1/2x20UNF threads.  The .177 version is nearly silent.  In the middle of a field, I registered only 58.9dB with the muzzle about 6 inches away from the microphone. It’s a truly backyard friendly gun.

Brocock advertises the following shot counts for the Sniper XR:

Our test gun exceeded this.  With a full fill in the 480cc carbon fiber bottle, and using JSB Redesigned Monster 13.43gr pellets…I repeatedly got in excess of 160 shots at just under 20ft-lb on high power.  The JSB Exact Heavy 10.3gr, the most accurate pellet in my testing, averaged a little over 18ft-lb.  We haven’t had the opportunity to test the other calibers yet, but it seems safe to believe the manufacturer’s claims regarding shot count and power output.  Over our 160+ shot count strings, the average extreme spread was 21fps, with a standard deviation of just 3fps.  It seems their new hammer/valve/reg system is working beautifully.  You can expect tight consistency and flat strings from the XR line.

Our modus operandi for testing guns is to leave them in the condition in which they come out of the box.  Truly “out of the box” and bone stock.  For this reason, we did not adjust the trigger on our test gun before the review.  Using a Lyman trigger pull gauge, our gun gave us a 2lb average trigger pull.  There is a distinct and easy first stage, a solid second stage wall, and just a hint of creep in the second stage.  I’m sure this can be adjusted to a lower pull weight, and hopefully with less creep in the second stage, but it is a marked improvement over the earlier Brocock trigger pull.

Now for everyone’s favorite category…accuracy.  How accurate is the Sniper XR?  VERY, VERY accurate!  I tested many pellets, but the JSB Exact Heavy 10.3gr were the most accurate in this particular gun.  It easily printed sub-MOA 5 shot groups at 50 yards.  Below is an average 50 yard 5 shot group, though some without the camera rolling were even better.  There’s one “flyer” in that group that opened it up to just under 1/2 inch.  Without that flyer, it was just over 1/4″.  Mind you, these were unsorted pellets and it was a windy day.  I’m quite confident the gun can do even better than this.

There is no question that the Sniper XR is a big improvement over the original Sniper.  The side-lever alone makes shooting the gun a more pleasurable experience.  Add to that new highly finished barrel, more efficient hammer/valve system, and improved trigger…and you have yourself one hell of a nice package.  Normally I would tell you the “cons” of the airgun I’m reviewing…but they’re hard to find on the Sniper XR.  The only one I can think of is that the trigger is a bit heavy and a bit creepy out of the box…but again…it is fully adjustable.  After finishing the review, I did adjust the trigger…and it became MUCH nicer.  Therefore, I can’t really call the out of the box trigger a con.  I fully understand why they use a conservative factory adjustment. *COUGH COUGH* lawyers *COUGH COUGH*

You can find the Sniper XR right here on the Baker Airguns website, and I hope this review has been helpful and informative.  You guys stay tuned, stay safe, and happy shooting!

If you’re like me, Made In America means something to you.  Sure, other countries can produce some fine goods…but when there is something exceptional made right here in the good old USA…that’s the one I want.  The American Air Arms EVOL is one of those exceptional things made here in America….and yes….I want one!  The … END_OF_DOCUMENT_TOKEN_TO_BE_REPLACED
Read More »

Leave it to FX Airguns to take a fantastic gun and make it better.  This is surely the case with the new Wildcat MkIII BT.  BT meaning that the gun now has a carbon fiber bottle, but that’s not the only improvement made.  The new BT also now has two AMP regulators and the same … END_OF_DOCUMENT_TOKEN_TO_BE_REPLACED
Read More »

Every once in a while, a combination of things that have existed for some time come together and are so good that you ask yourself why you haven’t been doing this already.  I think this is the case with the airgun and the LPVO, or Low Powered Variable Optic.  If you make that a semi-automatic … END_OF_DOCUMENT_TOKEN_TO_BE_REPLACED
Read More »

Hi everybody.  Today’s review is on the new flagship scope from Hawke…the Frontier 34 SF ZS FFP.  The acronyms stand for Side Focus, Zero Stop, and First Focal Plane.  The 34 stands for the massive 34 millimeter main tube.  The scope has all of these attributes, and many more.  With a price tag into the … END_OF_DOCUMENT_TOKEN_TO_BE_REPLACED
Read More »

Hi everyone.  This article is going to show you how I set up a gun for field target competition.  Specifically, for Hunter Field Target.  There are different classes in field target, and Hunter is by far the most popular class.  It’s also where I’d recommend starting out if you’re new to field target.  I wrote … END_OF_DOCUMENT_TOKEN_TO_BE_REPLACED
Read More »

I’d bet a dollar that most of us airgunners started with a multi-pump when we were kids.  I know I did.  The Daisy 880 and the Crosman 1377 were my first two.  Many more followed, and I literally cannot even guess how many thousands and thousands of shots I’ve taken with a multi-pump airgun.  Perhaps … END_OF_DOCUMENT_TOKEN_TO_BE_REPLACED
Read More »
Loading...