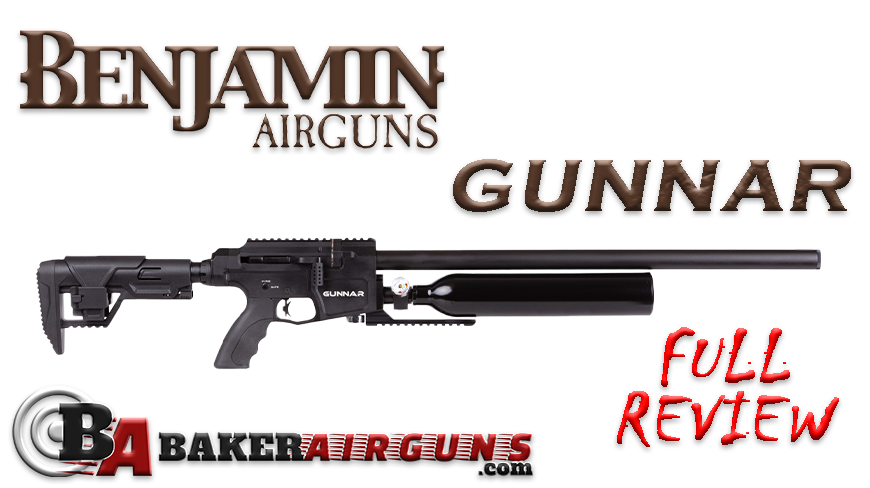 Benjamin has launched a new PCP for 2022.  This is the Gunnar.  It’s the most modern and feature-rich PCP from Benjamin to date.  Manufactured in Turkey, the Gunnar has some impressive specs.  Let’s have a good look at the new gun.  Below is a link to the full review video that accompanies this written report.  I suggest taking them both in for the full story.

The Gunnar is a side-lever operated PCP repeater available in both .22 and .25 caliber.  It has an (internally) adjustable regulator as well as a 5 position transfer port adjuster.  A 500cc aluminum bottle reservoir that fills to 3000psi gives the gun a pretty good shot count.  It comes with 2 magazines as standard.  The .22 cal magazine holds 12 pellets, and the .25 cal holds 10.  These are the same magazines used on the Turkish “Craftsman” series of Benjamin airguns.

After cleaning the ample shipping grease from the gun, my first testing was over the chronograph.  I used a .25 caliber example for all of my testing in this review.  The graph you see below is a full shot string with the gun set to max power on the transfer port adjuster.  I did not adjust the regulator.  It performed very well.  Using the JSB King 25.39gr pellets…I got an average of 40 shots per fill, an average velocity of 876fps for 43.26ft-lbs, an extreme spread of 15fps, and a standard deviation of 3fps.

I also tested the gun on all five transfer port power settings.  I didn’t do a full shot count for each power level, but did get the average velocity and energy for each setting using the same JSB King 25.39gr pellets.  While there is a massive difference between max and low, some of the steps are barely steps at all.

You will find that the Gunnar is a very quiet airgun.  It has a baffled shroud that does an excellent job of reducing the report of the gun.  In our testing, Dani found that even in .25 caliber and on the “max” setting, the Gunnar only produced 66.6 decibels…and that’s without a pellet and indoor.  That is VERY quiet.  If that’s just not quiet enough for you, the gun actually comes with a replacement shroud plug that is threaded for 1/2 x 20 UNF….giving you the capability of mounting any modern airgun suppressor.  This is something I really like about the Gunnar.

Another thing I really like is the buttstock and general ergonomics.  It uses an AR-15 style grip and an AR-15 style buttstock with a rubber buttpad.  The grip has a palm swell and is very comfortable.  The buttstock is out of this world!  It has an adjustable cheek-piece that adjusts up and down as well as back and forth.  The entire stock also adjusts back and forth for a length of pull adjustment.  There is a downward facing section of picatinny rail for adding a monopod or rear bipod.  It also has very little play compared to other AR-15 stocks.  I just can’t say enough good about it.  The stock is just wonderful.  The entire gun feels very comfortable, though it is a bit front heavy.

The trigger is another story.  While it’s a very light trigger pull, averaging just a bit over 1lb of pull (1.13lb)…the character of the trigger leaves something to be desired.  It seems to be a single stage trigger, though it’s long and mushy…much like a Glock trigger.  It’s useable, but it’s not great.  Definitely not a match trigger.  The only adjustment for the trigger is an adjustable pad.  It can move up and down and you can add cant…but the character of the trigger itself is not adjustable.  Again, it’s not horrible…but it’s not spectacular either.  I do like that it has an oversized trigger guard to accommodate a gloved finger.

As with anything in life, there are always pro’s and con’s.  What are the pro’s of the new Benjamin Gunnar?  Quite a bit.  Something I haven’t mentioned yet is the silky smooth side-lever action.  The ergonomics, to include the grip and stock, are just wonderful.  It’s extremely quiet and comes equipped to be made even more quiet if you choose.  The power is adjustable, and though the reg is not externally adjustable…it is in fact still adjustable.  It’s very consistent and very accurate.  It’s definitely a modern PCP, and comes with a five year warranty.  That’s huge!  The only real con’s would be the trigger (though it’s not THAT bad), and the front heaviness of the gun.  Is the Gunnar worth it’s (current in January 2022) $999.99 price tag?  I think so.  We have these in stock at Baker Airguns if you’re interested.

If you’re like me, Made In America means something to you.  Sure, other countries can produce some fine goods…but when there is something exceptional made right here in the good old USA…that’s the one I want.  The American Air Arms EVOL is one of those exceptional things made here in America….and yes….I want one!  The … END_OF_DOCUMENT_TOKEN_TO_BE_REPLACED
Read More »

Leave it to FX Airguns to take a fantastic gun and make it better.  This is surely the case with the new Wildcat MkIII BT.  BT meaning that the gun now has a carbon fiber bottle, but that’s not the only improvement made.  The new BT also now has two AMP regulators and the same … END_OF_DOCUMENT_TOKEN_TO_BE_REPLACED
Read More »

Every once in a while, a combination of things that have existed for some time come together and are so good that you ask yourself why you haven’t been doing this already.  I think this is the case with the airgun and the LPVO, or Low Powered Variable Optic.  If you make that a semi-automatic … END_OF_DOCUMENT_TOKEN_TO_BE_REPLACED
Read More »

Hi everybody.  Today’s review is on the new flagship scope from Hawke…the Frontier 34 SF ZS FFP.  The acronyms stand for Side Focus, Zero Stop, and First Focal Plane.  The 34 stands for the massive 34 millimeter main tube.  The scope has all of these attributes, and many more.  With a price tag into the … END_OF_DOCUMENT_TOKEN_TO_BE_REPLACED
Read More »

Hi everyone.  This article is going to show you how I set up a gun for field target competition.  Specifically, for Hunter Field Target.  There are different classes in field target, and Hunter is by far the most popular class.  It’s also where I’d recommend starting out if you’re new to field target.  I wrote … END_OF_DOCUMENT_TOKEN_TO_BE_REPLACED
Read More »

I’d bet a dollar that most of us airgunners started with a multi-pump when we were kids.  I know I did.  The Daisy 880 and the Crosman 1377 were my first two.  Many more followed, and I literally cannot even guess how many thousands and thousands of shots I’ve taken with a multi-pump airgun.  Perhaps … END_OF_DOCUMENT_TOKEN_TO_BE_REPLACED
Read More »
Loading...