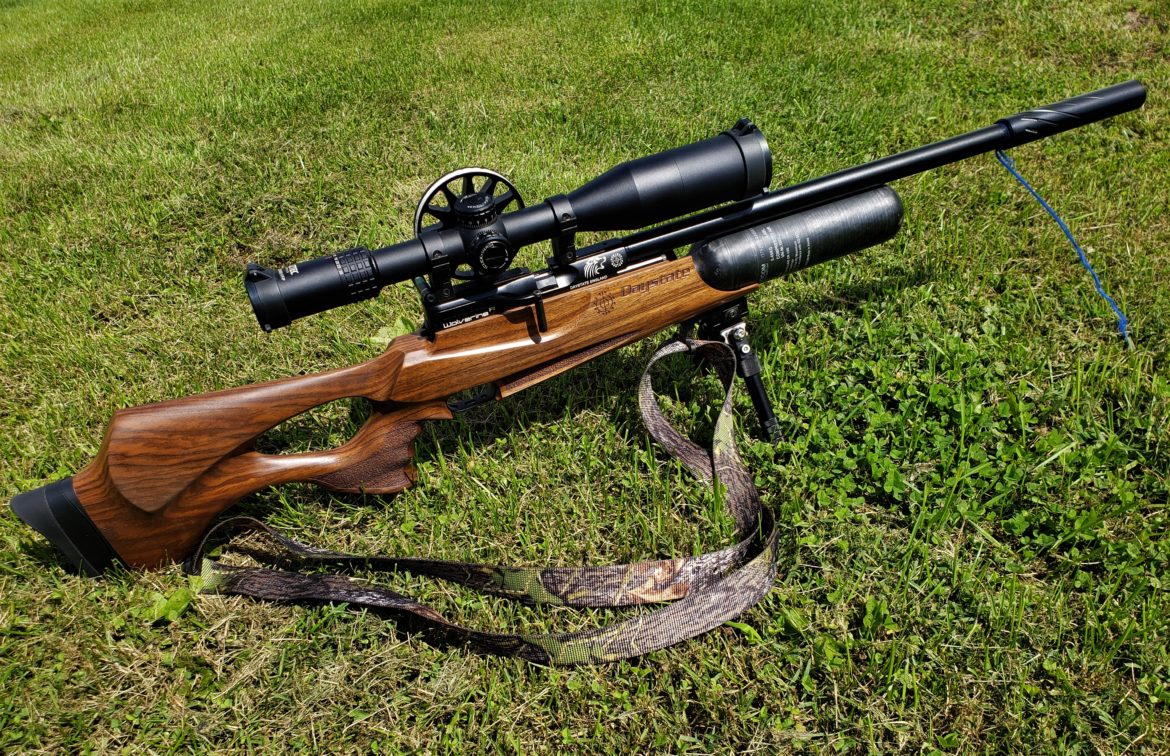 I’m one crazy picky guy when it comes to airguns these days.  I admit it, since I started working here at Baker Airguns…I’ve become something of an airgun snob.  I am quite lucky in that I get to shoot and handle just about every airgun you can imagine…new and old.  After shooting field target last season, I formed a set of requirements for this year’s field target gun.  I wanted a bottle gun.  I want the ability to shoot an entire match, including practice shots, without refilling.  I also wanted a regulator, both to help with the shot count as well as in seeking the smallest possible extreme spread over my entire shot string.  I wanted an excellent trigger.  I wanted smooth side-lever cocking and the ability to use both a magazine or factory supplied single shot tray.  I wanted an adjustable stock and superb ergonomics.  I also wanted it quiet, but most of all….I wanted an incredibly accurate gun.  After trying countless airguns, I found what I was looking for and more.  What I didn’t know before I started looking, is that I would find it all in such a gorgeous and well refined package.  I give you the Daystate Wolverine R Hilite blog, as well as the brand new video review below.  I suggest checking both of them out for the full story.

What an absolute stunner of a gun!  Am I right?  I absolutely love the distinct wavy grain lines in my particular stock…which is the gun in the pictures above and below.  Mine (or maybe we should refer to it as “my first one”) is in .177 caliber and is the standard power version.  The gun is available in .177, .22, .25, and .303.  Everything except the .303 is available as the Wolverine R Hilite with the Huma regulator in both standard and high power versions.  The .303 only comes in a single power configuration when equipped with the Huma regulator, producing an average of 55 shots at 60fpe!  Daystate claimed 160 shots out of my gun in .177, and my testing confirms this number exactly.  Using unsorted JSB (old) Monster 13.43gr pellets at 805fps average (19.5fpe), I routinely got exactly 160 shots with an average of 15fps extreme spread!  Using sorted pellets gets that extreme spread closer to 10fps!  That kind of consistency is second to none.  Literally.  The Wolverine R is the most consistent airgun I have ever tested.  You can trust the information available on the Daystate website concerning the power and shot counts of the other models.  I’ve tested several calibers/configurations, and they were all in line with what is advertised.  No inflated numbers here. That big 480cc carbon fiber bottle gives you tons of shots!

The Wolverine R comes with a wonderful, fully adjustable, two stage trigger.  Straight from the factory, you’ll find the first stage nice and long and light…a distinct wall for the second stage…and a light crisp break averaging about 1.5lbs.  Again, this is fully adjustable to user preferences.  I just lightened mine a bit to just about a pound, and I love it.  The side lever is smooth and easy to use, making for a very nice feel when running the gun.  It ships with both a single shot tray (except for the .303) and a magazine.  The magazines are easy to use an have been perfectly reliable for me.  They can be set up to load from either side of the gun.  The safety is located at the rear of the gun, making it easy for both right and left handed shooters to operate.  What’s more is that the stock is made to be ambidextrous, and what’s EVEN more is that the side lever can be switched to either side, making the gun truly and fully ambidextrous.  Lefty’s rejoice!

As I mentioned before, my gun is the Walnut version…but it is also available in both a grey and forest green laminate thumbhole stock.  I prefer the classic look of the walnut, but I’m praying for a version in the same blue laminate as the Red Wolf Midnight.  I’d buy that up the same day it’s released…but it’s really just a pipe dream.  I have heard nothing about this being in the works.  Having said that, both the grey and green laminate versions are gorgeous!  The stocks are all the same shape regardless of the material used, and what an ergonomic shape it is!  They’re all made by Minelli in Italy, and come with their signature 3-D fully adjustable butt-pad.  The standard power versions weigh in at around 7.5lbs, and the high power version around 8lbs…making for a fairly lightweight package.  The difference in weight is primarily due to the longer 23″ Lothar Walther barrels used on the high power versions compared to the 17″ Lothar Walther barrels on the standard power versions. More about those barrels later… 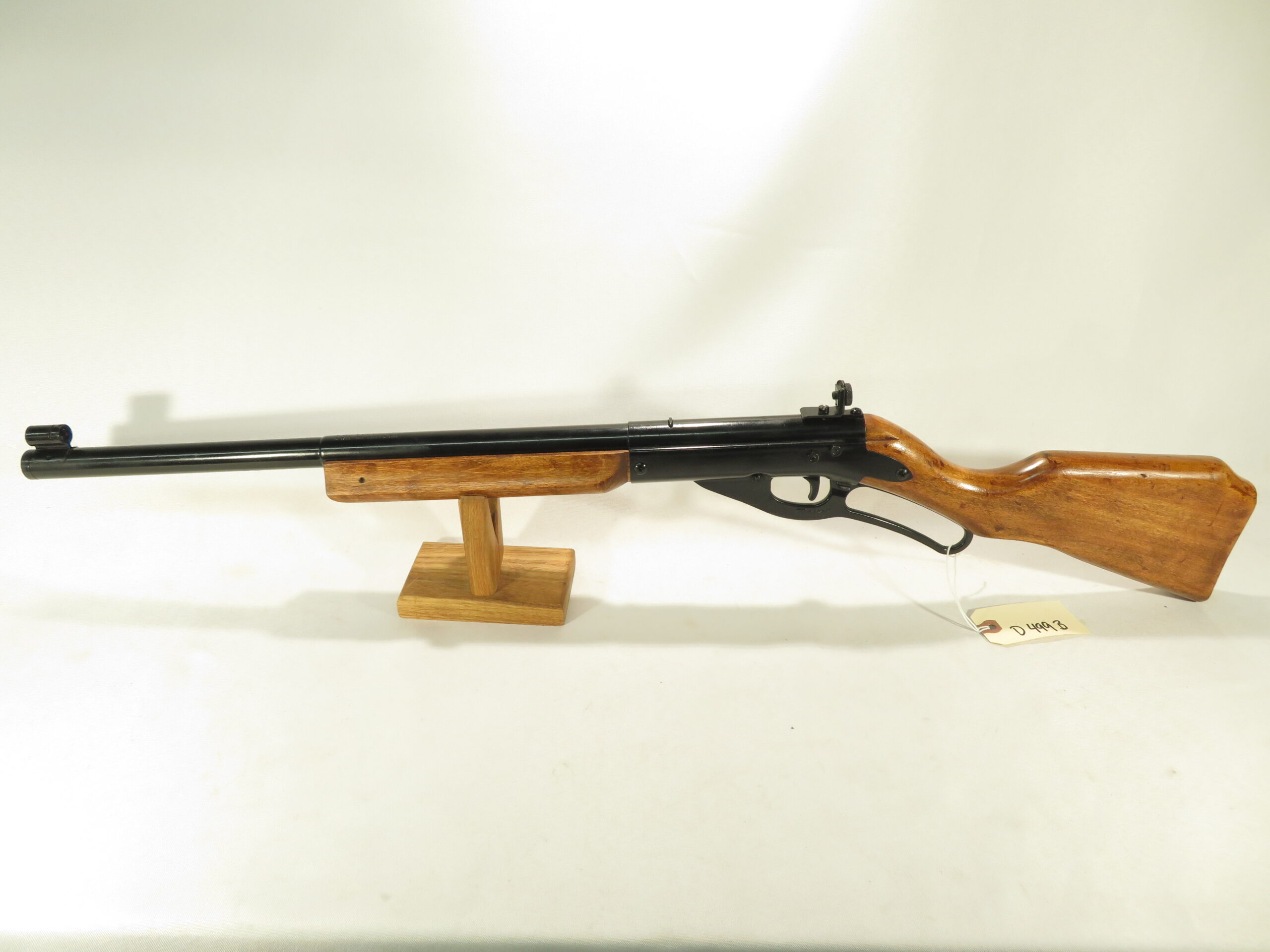 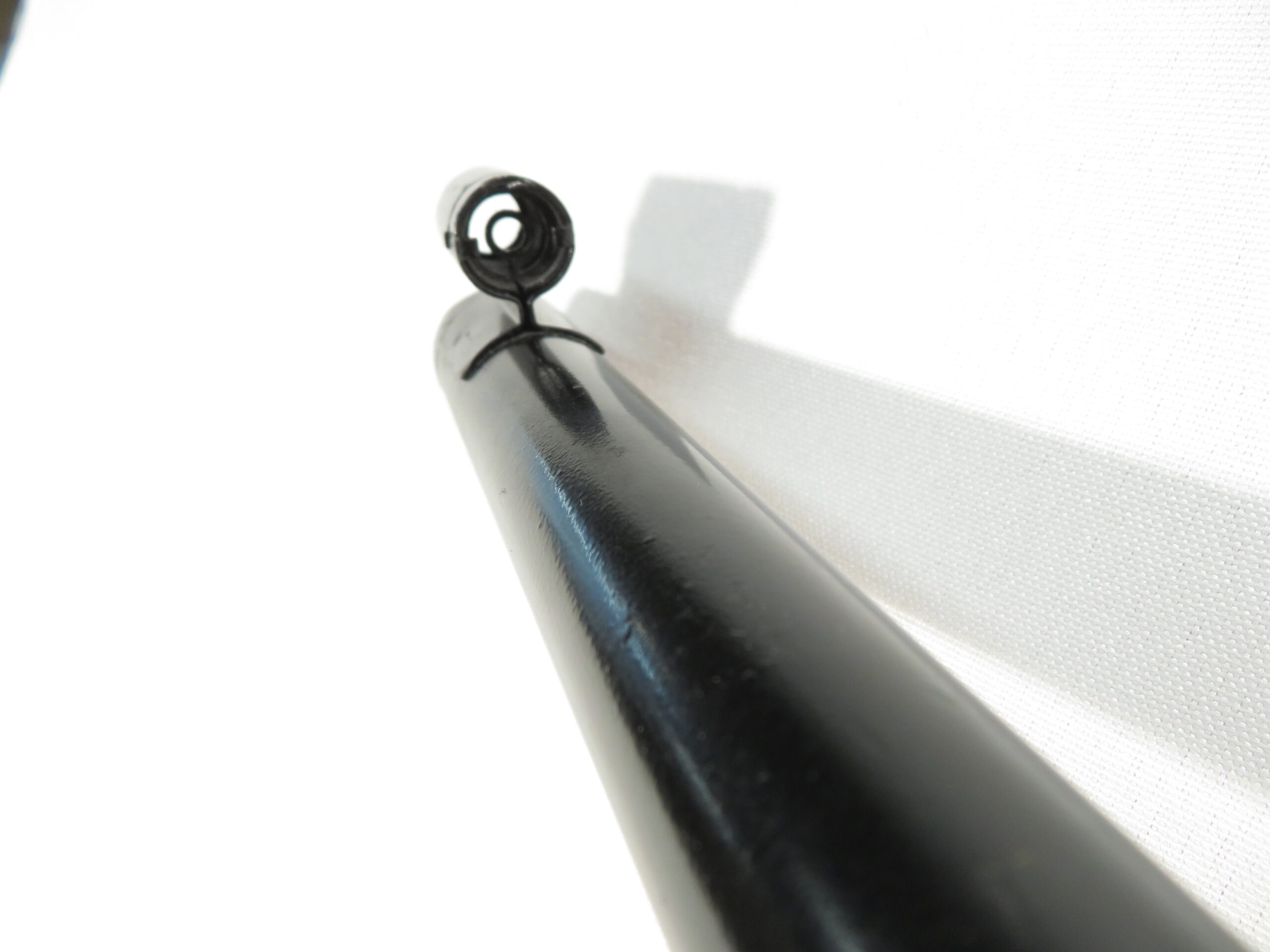 0 out of 5
0 review(s)
$149.99
Condition: Vintage - Professionally resealed and in good working condition 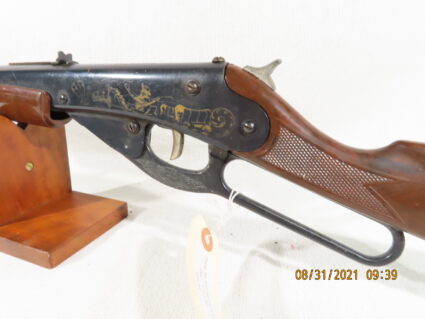 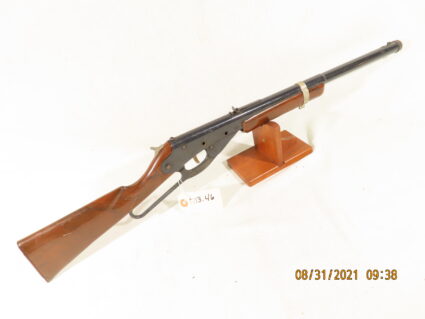 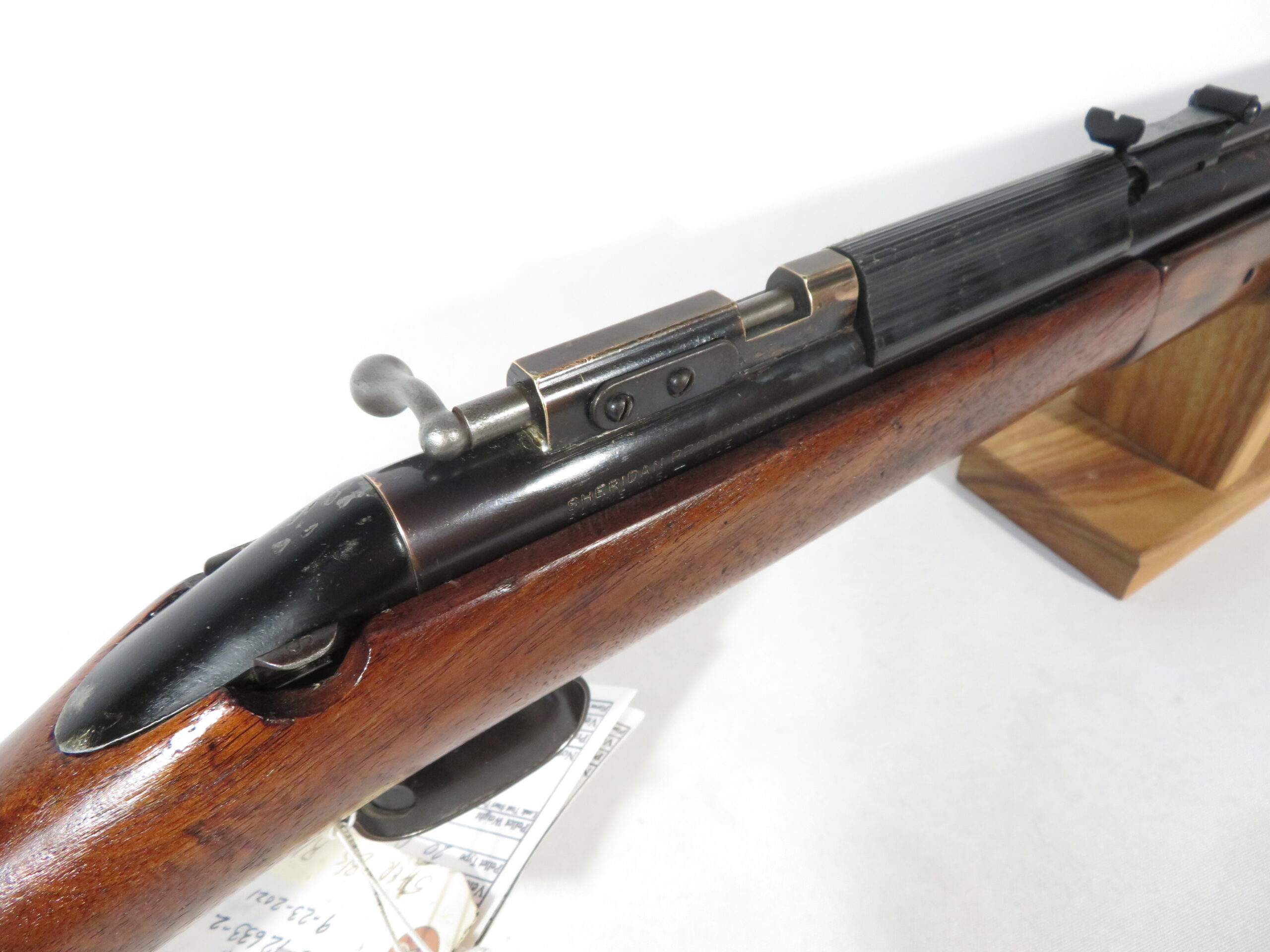 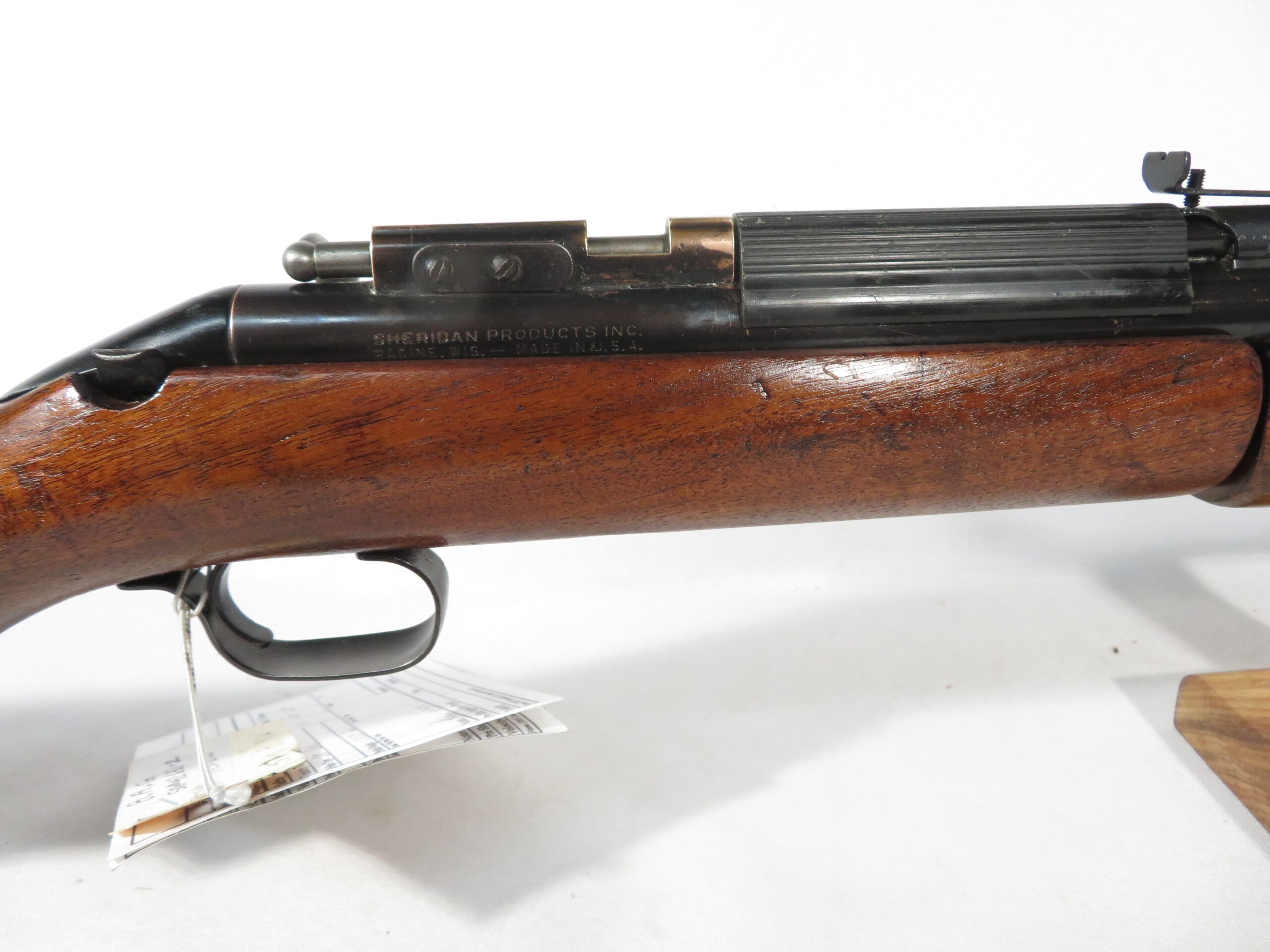 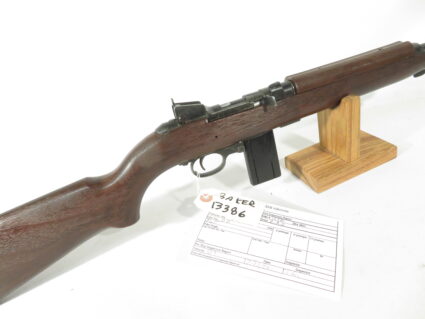 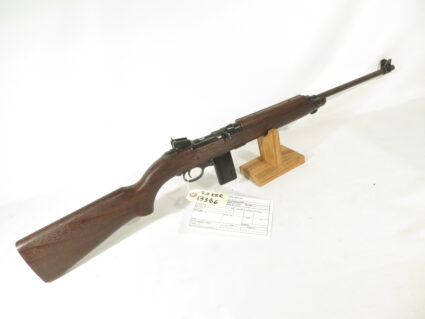 The overall length of the standard power version is 38″ and the high power comes in at 44″.  This is without a moderator, but these guns come equipped with a non-removable Hugget…adding a little to the overall length.   It’s worth it for the enormous reduction in sound.  My .177 is nearly silent, and the .22 is more than backyard friendly.  The high power versions are a little louder, but not by much if you’re still subsonic.  The larger .25 and .303 are well moderated and certainly not loud either.  These moderators are attached to the full shrouds that cover the fully floated, but still incredibly rigid, Lothar Walther barrels.

So anyway…about those barrels.  When I said earlier that I wanted an incredibly accurate gun, I meant it.  I wanted MOA or better accuracy out to at least 55 yards.  I tested lots of different pellets with my .177, and found that none shot better than the JSB and Air Arms derivatives.  For a long time, I used the JSB Old Monster 13.43gr pellets.  They shoot great out of the gun.  Having said that, I have recently switched to the Air Arms Field Heavy 10.3gr pellets.  My main use for the gun is Field Target  competition, and I’m hoping that the flatter trajectory of the lighter pellet will help to make up for any ranging errors on my part.  Both pellets are MOA accurate or better at 55 yards.  At 30 yards, you can stack as many pellets as you want on top of each other.  As far as the other calibers, these guns all are literally MOA or better at 50 yards.  Mostly better.  I extensively shot a .22 standard power version with the new, and awesome, JSB Hades pellets.  In fact, I used the .22 Wolverine R Standard Power exclusively in my video review of the JSB Hades pellets.   Those pellets shoot like a dream out of the Wolverine R, and are quite deadly.  A match made in heaven!  The .303 is literally sub-MOA at 50 yards, stacking the JSB 44.75gr pellets at will.  The .25 is no different.  These are some of the most accurate airguns I’ve ever had the pleasure of firing.  Much more on this in the video above.

What the Wolverine R Hilite has to offer is the equal or better of any rifle in it’s class.  It does offer something the others don’t, however, and this is something that is hard to quantify.  It’s the “feel” of the gun.  When you hold a Wolverine R, you feel like you’re holding a gun that is worth it’s, admittedly heavy, price tag.  It’s similar to sitting in a high end German luxury car, flying first class, or drinking an expensive single-malt scotch.  Sure, there are cheaper alternatives that will do the same thing…but there is a difference…and if you can afford it, the difference is worth the money.

If you’re like me, Made In America means something to you.  Sure, other countries can produce some fine goods…but when there is something exceptional made right here in the good old USA…that’s the one I want.  The American Air Arms EVOL is one of those exceptional things made here in America….and yes….I want one!  The … END_OF_DOCUMENT_TOKEN_TO_BE_REPLACED
Read More »

Leave it to FX Airguns to take a fantastic gun and make it better.  This is surely the case with the new Wildcat MkIII BT.  BT meaning that the gun now has a carbon fiber bottle, but that’s not the only improvement made.  The new BT also now has two AMP regulators and the same … END_OF_DOCUMENT_TOKEN_TO_BE_REPLACED
Read More »

Every once in a while, a combination of things that have existed for some time come together and are so good that you ask yourself why you haven’t been doing this already.  I think this is the case with the airgun and the LPVO, or Low Powered Variable Optic.  If you make that a semi-automatic … END_OF_DOCUMENT_TOKEN_TO_BE_REPLACED
Read More »

Hi everybody.  Today’s review is on the new flagship scope from Hawke…the Frontier 34 SF ZS FFP.  The acronyms stand for Side Focus, Zero Stop, and First Focal Plane.  The 34 stands for the massive 34 millimeter main tube.  The scope has all of these attributes, and many more.  With a price tag into the … END_OF_DOCUMENT_TOKEN_TO_BE_REPLACED
Read More »

Hi everyone.  This article is going to show you how I set up a gun for field target competition.  Specifically, for Hunter Field Target.  There are different classes in field target, and Hunter is by far the most popular class.  It’s also where I’d recommend starting out if you’re new to field target.  I wrote … END_OF_DOCUMENT_TOKEN_TO_BE_REPLACED
Read More »

I’d bet a dollar that most of us airgunners started with a multi-pump when we were kids.  I know I did.  The Daisy 880 and the Crosman 1377 were my first two.  Many more followed, and I literally cannot even guess how many thousands and thousands of shots I’ve taken with a multi-pump airgun.  Perhaps … END_OF_DOCUMENT_TOKEN_TO_BE_REPLACED
Read More »
Loading...