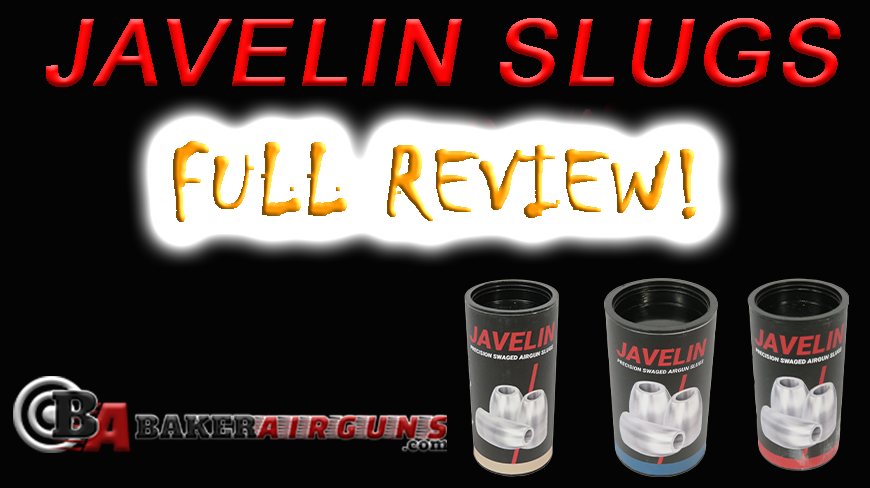 With the popularity of airgun slugs these days, there is no shortage of available options.  So how do you choose among the myriad of offerings?  First and foremost, you’ll want to try them and see which ones are the most accurate in your gun.  Beyond that, you’ll want a product with a high level of consistency from slug to slug.  You’ll also surely be interested in the terminal performance of the projectile.  Today’s review is on the Patriot Javelin slugs in 34gr, 30gr, and 26gr.  All are 0.218″.  Below is a link to the full length review video that accompanies this written report.  I suggest taking them both in for the full story.

As I said above, the most important part of your selection process should be to test the slugs for accuracy IN YOUR GUN.  That is why I will not be including any accuracy testing in this review.  It doesn’t matter how these slugs performed in my test gun.  All that matters is how they would perform in yours.  Even still, I’ll tell you that my test gun was an FX Impact M3 Compact with the slug power kit and Superior Heavy barrel installed.  I would highly suggest trying different weights and diameters even in the same brand.  I have seen spectacularly different results between a 0.216″ and 0.217″ in the same brand and weight of slug.  Test them, guys….and don’t worry about how they shoot in your buddy’s gun.

As with anything that is mass produced, you will find variation in the product.  To test for the variation in the Javelin slugs, I took a random 20 slug sample from each package.  I both weighed them to an accuracy of 0.02gr, and measured their diameter to an accuracy of 0.0005 inches.  Of course there is a margin of error in the measurement…but I believe the numbers are useful.  In short, the Javelin slugs are EXTREMELY consistent in both weight and diameter.  Below are charts showing my results.

When I do these reviews, I always write a written report as well as record and post a review video.  I also always urge you to “…take them both in for the full story.”  We’ll now discuss the terminal performance testing that I did with these projectiles, and you’ll be missing quite a bit of the story if you don’t watch the video.  I recorded the gel testing in slow motion, and you can see quite a lot in the vid.  The test was performed at 20 yards.  Below is a chart of my results.  The muzzle velocity and energy of the tests were as follows:

Below are some pictures of the gel and the recovered slugs.  Please forgive how cloudy the gel is, as I’ve reused it quite a few times.  Also, the pictures belie the actual measurements.  You want to measure from the end of the wound track, and not where the projectile ended up in the gel.

As you can see, you can expect good expansion from the Javelin slugs.  In the bare gel test, all three weights expanded to roughly .40 caliber.  You should expect less expansion in an actual animal.  You can also expect very shallow penetration in an animal, but probably a bit more than we see in the gel test.  Though not by much, at roughly the same energy level…the heavier the slug…the more it penetrated.  All in all, I’d say that out of a powerful .22 caliber gun…these would be very lethal projectiles on smaller animals.

If you’re like me, Made In America means something to you.  Sure, other countries can produce some fine goods…but when there is something exceptional made right here in the good old USA…that’s the one I want.  The American Air Arms EVOL is one of those exceptional things made here in America….and yes….I want one!  The … END_OF_DOCUMENT_TOKEN_TO_BE_REPLACED
Read More »

Leave it to FX Airguns to take a fantastic gun and make it better.  This is surely the case with the new Wildcat MkIII BT.  BT meaning that the gun now has a carbon fiber bottle, but that’s not the only improvement made.  The new BT also now has two AMP regulators and the same … END_OF_DOCUMENT_TOKEN_TO_BE_REPLACED
Read More »

Every once in a while, a combination of things that have existed for some time come together and are so good that you ask yourself why you haven’t been doing this already.  I think this is the case with the airgun and the LPVO, or Low Powered Variable Optic.  If you make that a semi-automatic … END_OF_DOCUMENT_TOKEN_TO_BE_REPLACED
Read More »

Hi everybody.  Today’s review is on the new flagship scope from Hawke…the Frontier 34 SF ZS FFP.  The acronyms stand for Side Focus, Zero Stop, and First Focal Plane.  The 34 stands for the massive 34 millimeter main tube.  The scope has all of these attributes, and many more.  With a price tag into the … END_OF_DOCUMENT_TOKEN_TO_BE_REPLACED
Read More »

Hi everyone.  This article is going to show you how I set up a gun for field target competition.  Specifically, for Hunter Field Target.  There are different classes in field target, and Hunter is by far the most popular class.  It’s also where I’d recommend starting out if you’re new to field target.  I wrote … END_OF_DOCUMENT_TOKEN_TO_BE_REPLACED
Read More »

I’d bet a dollar that most of us airgunners started with a multi-pump when we were kids.  I know I did.  The Daisy 880 and the Crosman 1377 were my first two.  Many more followed, and I literally cannot even guess how many thousands and thousands of shots I’ve taken with a multi-pump airgun.  Perhaps … END_OF_DOCUMENT_TOKEN_TO_BE_REPLACED
Read More »
Loading...