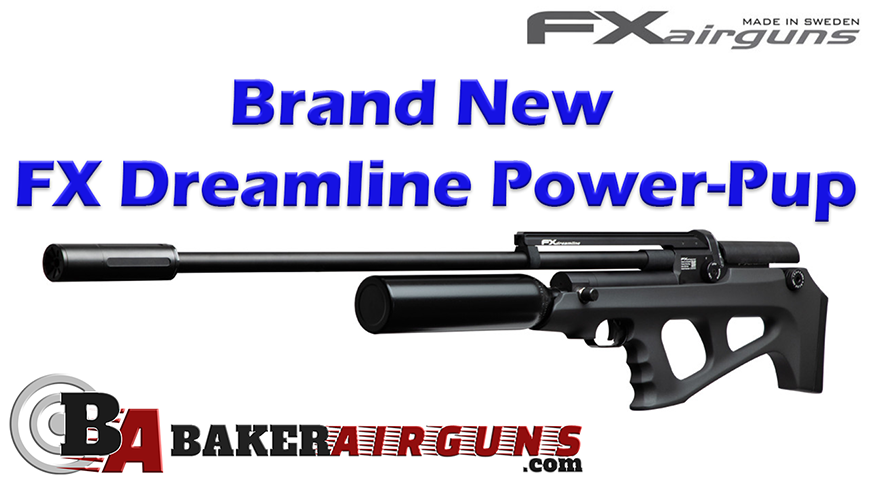 The FX Dream-Pup Bottle was, and still is, an excellent choice for a bullpup style airgun.  FX has now upgraded the gun with a massive 80cc plenum and a 700mm barrel.  It also gets a new name…”Power-Pup.”  The new Power-Pup also gets a redesigned valve since it’s no longer necessary to utilize the extended valve stem of the original Dream-Pup.  These new features mean you can wring A LOT more power out of the Power-Pup to shoot heavy pellets and slugs.  The video below accompanies this written review.  I suggest taking them both in for the full story.

So how much power does the new Power-Pup make?  FX gives the following maximum power figures…

That’s a lot of power!  I used the .25 caliber version for my review, and specifically tuned the gun to shoot the FX Hybrid Slugs at 1000fps.  That works out to about 57.75ft/lbs, and the gun did it with the greatest of ease.  With that tune, it shoots the FX 34gr .25cal pellets at about 920fps.  That works out to about 64ft/lbs.  This is with a hammer adjustment, transfer port on “High”, and the fully adjustable AMP regulator set at only 125BAR.  I have no doubt about the claimed power levels of the Power-Pup.

With the enormous 80cc plenum….you’re probably wondering if you’ll be getting more shots per fill out of the Power-Pup.  The answer is yes.  Yes you will.  Naturally your tune will affect your shot count, but here are the numbers published by FX for the 480cc 250BAR carbon fiber bottle…

With my particular tune (hammer maxed out and regulator set at 125BAR), I get about 80 shots per fill out of the 400cc aluminum bottle.  Just like the claimed power figures, I have no doubt about the claimed shot counts.

One of the best features of the Power-Pup is that it’s light and compact for it’s barrel length.  The gun weighs 6.3lbs with the carbon fiber bottle, and 6.95 with the aluminum bottle.  Despite it’s 700mm barrel, it’s only 37.5″ long.  This makes the Power-Pup a dream (no pun intended) to shoot off-hand.  It makes for a quick and nimble hunting gun that won’t weigh you down, but is equally at home being shot off of a bench.

Most other features have stayed the same on the Power-Pup.  It still has the magnificent, fully adjustable two-stage trigger.  My Lyman trigger pull gauge says the pull right out of the box is a meager 14oz.  It also still has the dovetail rail for mounting optics, and the side-lever and safety are exactly the same as the Dream-Pup.  Mine came with the optional DonnyFL moderator which does a good job of keeping things quiet despite the power of the gun.

So we now know that the new FX Power-Pup is powerful, light, handy, compact for it’s barrel length, has a great trigger, is fully adjustable, and quiet for it’s power.  But is it accurate?  Yes.  Yes it is.  My accuracy testing was done indoors at the Midwest Shooting Center.  I shot four 5-shot groups with each projectile at fifty yards.  The gun didn’t do too bad with the FX Hybrid Slugs, but did far better with the FX 34gr pellets.  Perhaps with a little more or less velocity the slug groups could be tightened up a bit, but the pellet groups were out of this world!  The average group size with the slugs was 1.01″, with a smallest group size of 0.81″.  The average group size with the pellets was 0.40″, with a smallest group size of 0.31″.  What’s more is that the largest group size with the pellets was 0.49″.  It’s quite literally sub-MOA with pellets at fifty yards.  That’s impressive! 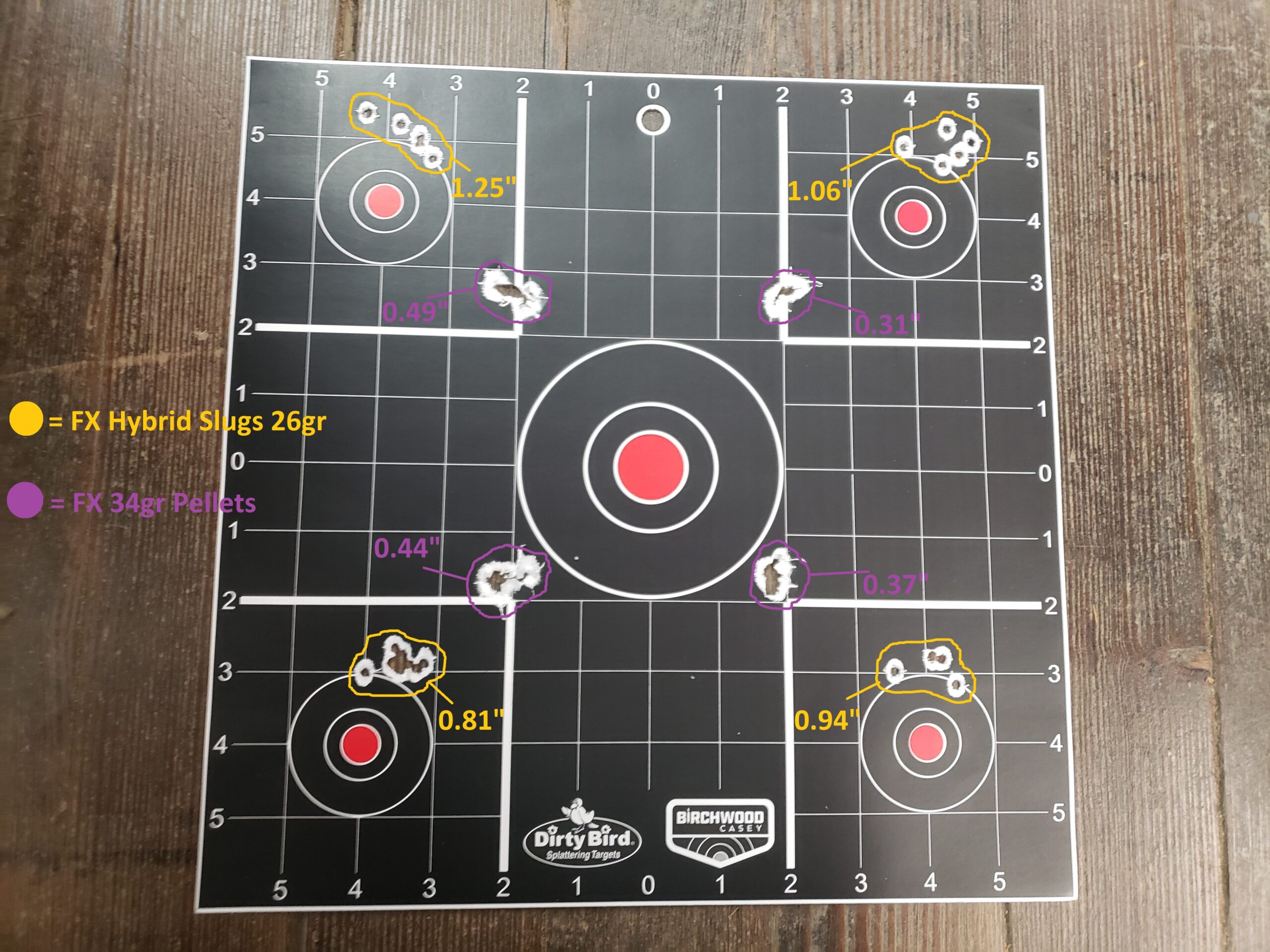 If you’re in the market for an EXTREMELY powerful and EXTREMELY accurate bullpup airgun, the new FX Dreamline Power-Pup would be an outstanding option.  While I usually include negative aspects of products in my reviews, I’ve really got nothing here for the Power-pup.  It’s much cheaper than other FX products, yet delivers class leading power, accuracy, fit, and finish.  I’m sure that if you get one, you’ll be quite happy with it.

If you’re like me, Made In America means something to you.  Sure, other countries can produce some fine goods…but when there is something exceptional made right here in the good old USA…that’s the one I want.  The American Air Arms EVOL is one of those exceptional things made here in America….and yes….I want one!  The … END_OF_DOCUMENT_TOKEN_TO_BE_REPLACED
Read More »

Leave it to FX Airguns to take a fantastic gun and make it better.  This is surely the case with the new Wildcat MkIII BT.  BT meaning that the gun now has a carbon fiber bottle, but that’s not the only improvement made.  The new BT also now has two AMP regulators and the same … END_OF_DOCUMENT_TOKEN_TO_BE_REPLACED
Read More »

Every once in a while, a combination of things that have existed for some time come together and are so good that you ask yourself why you haven’t been doing this already.  I think this is the case with the airgun and the LPVO, or Low Powered Variable Optic.  If you make that a semi-automatic … END_OF_DOCUMENT_TOKEN_TO_BE_REPLACED
Read More »

Hi everybody.  Today’s review is on the new flagship scope from Hawke…the Frontier 34 SF ZS FFP.  The acronyms stand for Side Focus, Zero Stop, and First Focal Plane.  The 34 stands for the massive 34 millimeter main tube.  The scope has all of these attributes, and many more.  With a price tag into the … END_OF_DOCUMENT_TOKEN_TO_BE_REPLACED
Read More »

Hi everyone.  This article is going to show you how I set up a gun for field target competition.  Specifically, for Hunter Field Target.  There are different classes in field target, and Hunter is by far the most popular class.  It’s also where I’d recommend starting out if you’re new to field target.  I wrote … END_OF_DOCUMENT_TOKEN_TO_BE_REPLACED
Read More »

I’d bet a dollar that most of us airgunners started with a multi-pump when we were kids.  I know I did.  The Daisy 880 and the Crosman 1377 were my first two.  Many more followed, and I literally cannot even guess how many thousands and thousands of shots I’ve taken with a multi-pump airgun.  Perhaps … END_OF_DOCUMENT_TOKEN_TO_BE_REPLACED
Read More »
Loading...