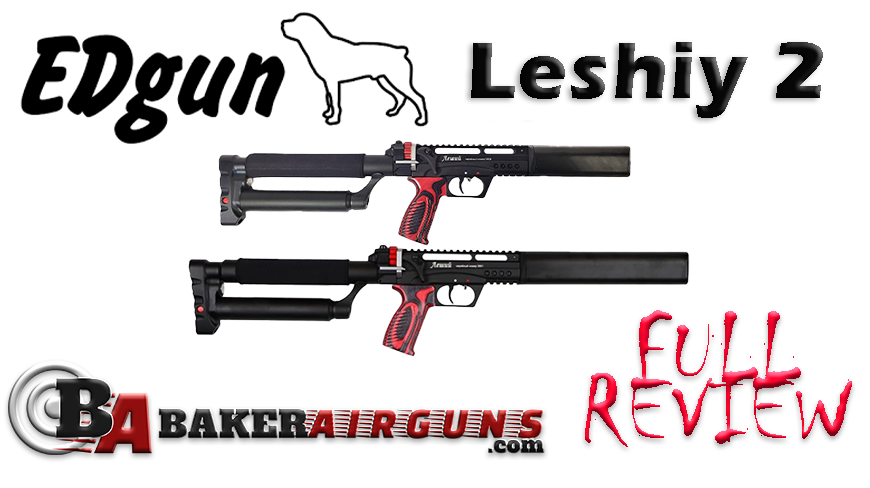 From Russia with love.  That’s the title of the second installment in the James Bond movie series.  Before leaving for his mission in “From Russia With Love”, Q gives Bond a briefcase with some spy gadgets inside.  One of those gadgets is an Armalite AR7 rifle.  It’s a fully capable rifle that packs up small enough to fit inside a briefcase, which BTW….actually exists in real life.  What’s in my briefcase?  The EDgun Leishy 2….one of the coolest airguns I’ve had the pleasure of playing with for some time.  It should really say “From Russia With Love” on the boxes these EDguns come in.  Despite their diminutive size, they are fully capable and downright fun to shoot.  Below is the link to the full review video that accompanies this written report.  I suggest taking them both in for the full story.

The point I’m making with the simile above is that the Edgun Leishy 2 would make an outstanding “backpack gun.”  As you’ll soon see, it’s a fully capable gun in any caliber and barrel configuration…yet compact enough to fit into just about any backpack, briefcase, gym bag, or what have you.  This is a point that should not be overlooked, and one of the many above average features of the gun.

Another above average feature of the gun would be it’s semi-automatic action.  While highly sought after, reliable semi-automatic airguns with substantial power levels are hard to come by.  After shooting two versions of the Leishy 2 for a couple weeks now (a .22 cal 250mm and a .30 cal 350mm) I’ve had precisely zero malfunctions despite about 1000 rounds total fired.  This includes rapid fire intended to try and choke up the guns.  Despite my efforts, both guns functioned flawlessly.

When I say the guns are “fully capable”, I’m referring to the power they produce, their accuracy, and reliability.  The guns utilize the R.E.P.R. regulator system which is fully adjustable and quite unique in the industry.  I did not adjust anything at all for my testing, so the chronograph results you see below are from stock settings, right out of the box.

Being that each magazine, regardless of caliber, holds 8 rounds….you can definitely get two mags worth of “on the reg” shooting out of either gun right from the factory.  How you adjust the R.E.P.R. system WILL affect your shot count and performance.  We’ve addressed both reliability and power…but what about accuracy?  The EDgun Leishy 2 does not disappoint in this category.  As I’ve said, the guns are “fully capable.”  Below are some average shot groups with both the short .22 250mm and the long .30 350mm.

As you can see, the Leishy 2 is plenty accurate for most needs.  The roughly 1 lb trigger pull helps to achieve this.  While not adjustable, the trigger pull is light with a nice character….especially for a semi-auto airgun.  When looking at the performance and features of the Leishy 2, I can think of quite a few reasons to get one.  Even still, I can give you two more big reasons.  For one, it is a modular system.  You can change caliber with a simple barrel and magazine swap.  You can also change just about every other piece of the gun as well.  You can add a larger reservoir, longer barrels, shrouds, rails, grips, and more.

The final reason I’ll give you is harder to quantify.  It’s the amount of fun that you’ll have with the Leishy 2.  If you watch the video that accompanies this article, you’ll see a clip of me, Dennis, and Mike shooting cans rapid fire using the .22 short with a Hawke Vantage Red-Dot at about 7 yards.  The objective was to shoot them as fast as we could.  While I already had some trigger time with the gun, it was the very first time that Mike or Dennis had ever shot the gun.  Despite this, every one of us was able to clear our cans at less than a second each.  Sure, that’s kind of impressive…but it’s not the important point.  The point I’m making is that when any of us were done shooting….there was a huge smile on our faces.  This was not planned or rehearsed.  It was simply the result of shooting the EDgun Leishy 2.  They are just plain fun to shoot.  What better use of money than to acquire something that will make you smile? 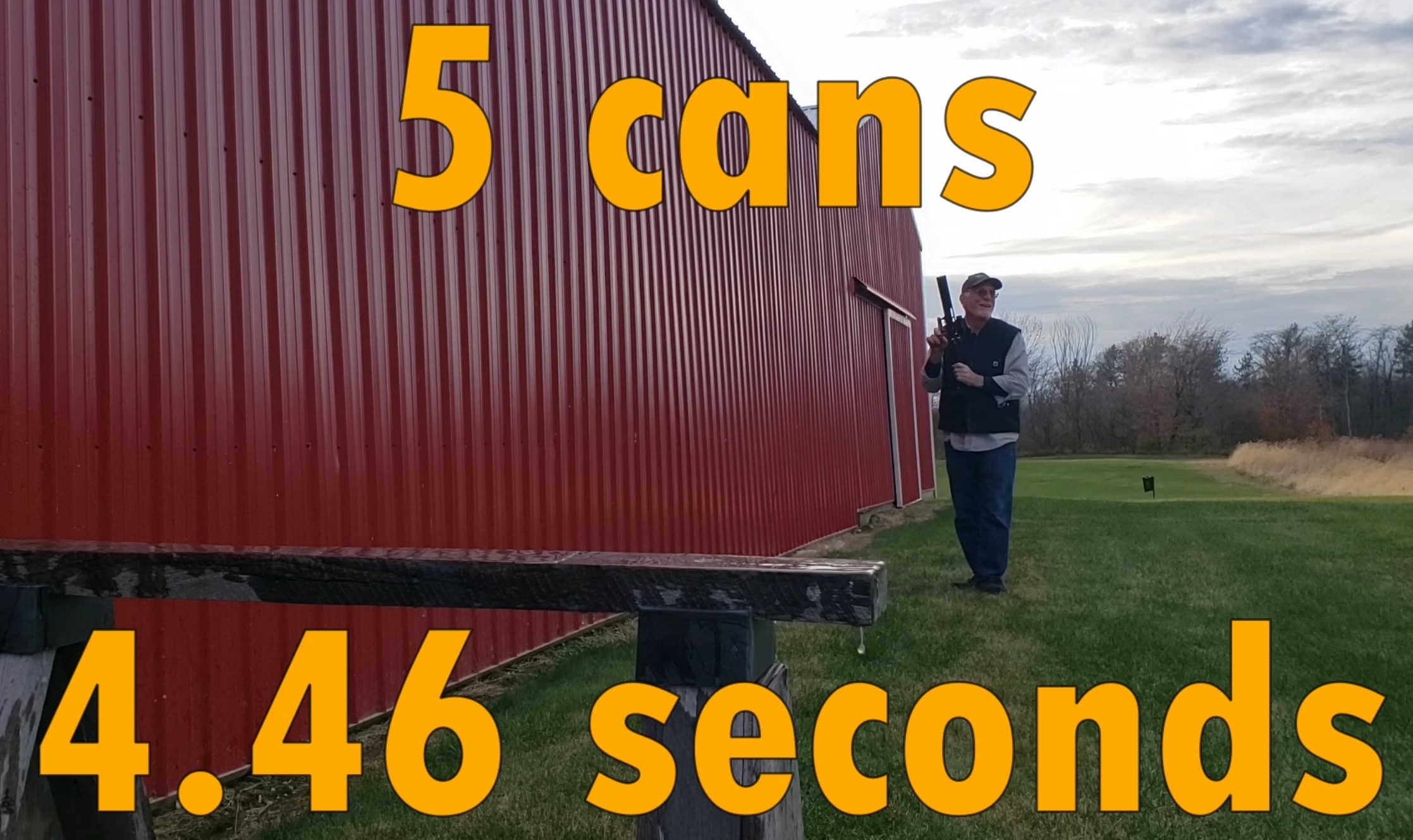 If you’re like me, Made In America means something to you.  Sure, other countries can produce some fine goods…but when there is something exceptional made right here in the good old USA…that’s the one I want.  The American Air Arms EVOL is one of those exceptional things made here in America….and yes….I want one!  The … END_OF_DOCUMENT_TOKEN_TO_BE_REPLACED
Read More »

Leave it to FX Airguns to take a fantastic gun and make it better.  This is surely the case with the new Wildcat MkIII BT.  BT meaning that the gun now has a carbon fiber bottle, but that’s not the only improvement made.  The new BT also now has two AMP regulators and the same … END_OF_DOCUMENT_TOKEN_TO_BE_REPLACED
Read More »

Every once in a while, a combination of things that have existed for some time come together and are so good that you ask yourself why you haven’t been doing this already.  I think this is the case with the airgun and the LPVO, or Low Powered Variable Optic.  If you make that a semi-automatic … END_OF_DOCUMENT_TOKEN_TO_BE_REPLACED
Read More »

Hi everybody.  Today’s review is on the new flagship scope from Hawke…the Frontier 34 SF ZS FFP.  The acronyms stand for Side Focus, Zero Stop, and First Focal Plane.  The 34 stands for the massive 34 millimeter main tube.  The scope has all of these attributes, and many more.  With a price tag into the … END_OF_DOCUMENT_TOKEN_TO_BE_REPLACED
Read More »

Hi everyone.  This article is going to show you how I set up a gun for field target competition.  Specifically, for Hunter Field Target.  There are different classes in field target, and Hunter is by far the most popular class.  It’s also where I’d recommend starting out if you’re new to field target.  I wrote … END_OF_DOCUMENT_TOKEN_TO_BE_REPLACED
Read More »

I’d bet a dollar that most of us airgunners started with a multi-pump when we were kids.  I know I did.  The Daisy 880 and the Crosman 1377 were my first two.  Many more followed, and I literally cannot even guess how many thousands and thousands of shots I’ve taken with a multi-pump airgun.  Perhaps … END_OF_DOCUMENT_TOKEN_TO_BE_REPLACED
Read More »
Loading...