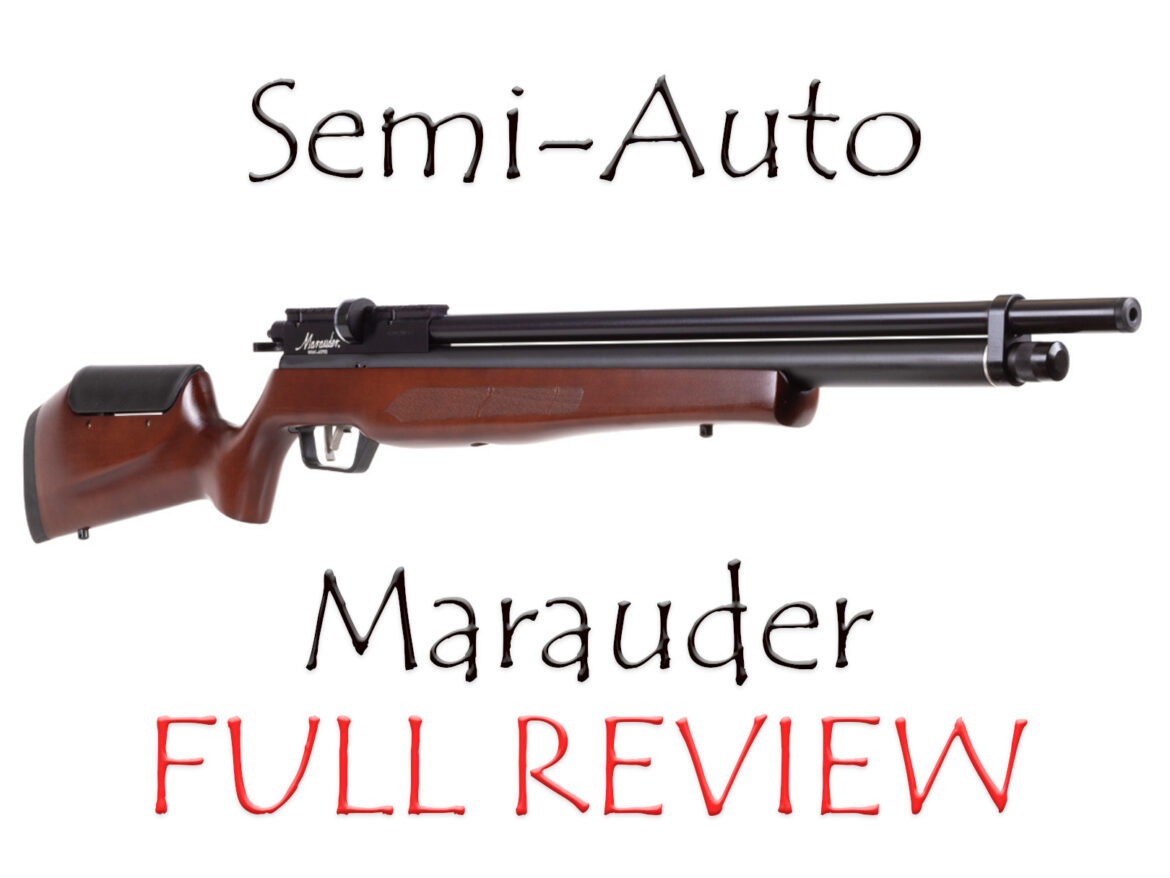 The first two minutes of the review video are of me blasting pop cans as fast as I can with the SAM.  Doing that was FUN!  That’s one of the main points that I wish to convey in this review.  The gun is essentially a good old Marauder that has the “fun” knob turned up to eleven.  Don’t get me wrong, there are some real technical improvements to the gun as well.  Among these would be the new picatinny rail optics mounting platform and the regulator.  That’s right.  The SAM is regulated!  While the SAM retains the hammer spring adjuster for changing the power, it no longer has the adjustable transfer port.  Nor is the regulator externally adjustable.  Still, the factory adjustments on the SAM put it around 23fpe in .22 cal.  With the hammer spring maxed out, you can expect around 28fpe…but fewer shots of course.  Below is a full shot string from a 3000psi fill on the stock settings.  I used the JSB Exact 15.89gr pellets for my testing.  I averaged about 75 shots on the reg at roughly 23fpe average, as seen below.  An extreme spread of 23fps over 76 shots isn’t bad.

Unfortunately, the new SAM magazines and older Marauder magazines are not interchangeable.  Trust me.  I tried.  While not really a negative aspect of the gun considering the upgrades, one must not expect to be able to use an older bolt operated Marauder magazine in the new gun.  Another major difference would be the trigger.  While the trigger looks like the same old Marauder trigger, it definitely feels….well…different.  My trigger testing produced a 1lb 13oz average with the SAM.  That’s fairly light, and the trigger is very easy to pull and use.  Having said that, it has a completely different character than the old Marauder trigger.  Out of the box, the first stage is light and roughly 1/4″ long.  The second stage gradually increases in pull weight, and is about 3/4″ long.  You can see this in the review video.  Again, the trigger is light and easy to use…but I would not call it match grade.  This is a price you must pay for the Semi-Automatic capability with the SAM.

Unfortunately, I was not able to test the SAM for accuracy at 50 yards like I normally do.  The wind lately has been too extreme to give the gun a fair chance at 50 yards.  Therefore, I did some 10 shot groups at 20 yards indoors.  The SAM regularly produced 10 shot groups of about 1/4″.  The group shown below (and in the video) was even better than that at 0.21″.  That’s as accurate as any gun I’ve tested.  Naturally, you will need to test pellets to find the most accurate one for you.  The JSB Exact 15.89gr were what I used for my testing. 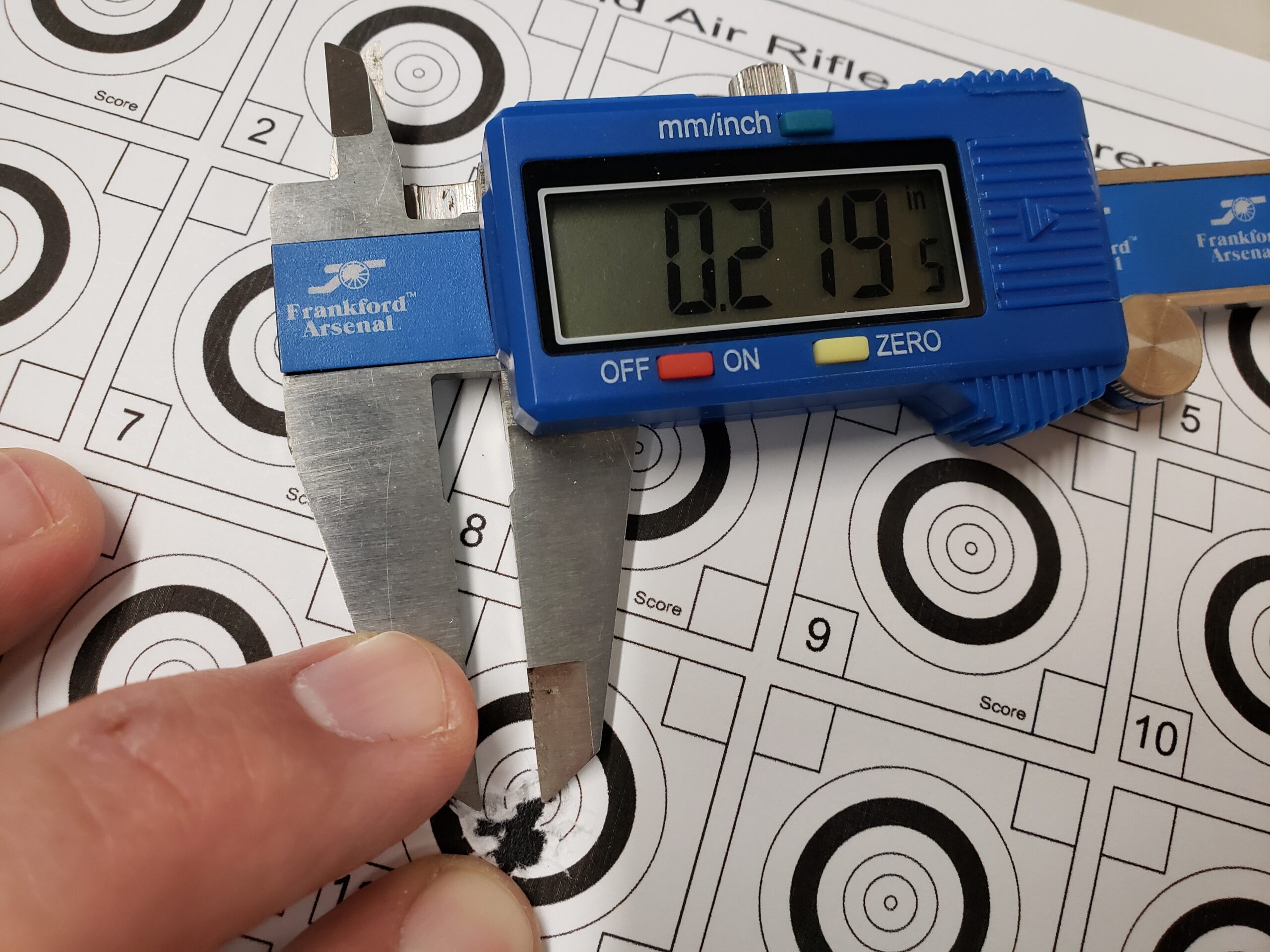 The physical specs on the SAM are pretty much right in line with the older bolt version.  I won’t bore you with them all, but you can check out our listing for the gun HERE if you want to see them.  The gun retains (relatively) the same stock as the older version, including the sling swivel studs and the adjustable cheek piece.  It also keeps the baffled shroud that keeps the gun nice and quiet.  If you’re looking for a gun to shoot competition with, you might want to stay with the original bolt operated Marauder.  If you want a nice hunting/plinking gun that is ridiculously fun to play with, then I’d take a good look at the SAM.

If you’re like me, Made In America means something to you.  Sure, other countries can produce some fine goods…but when there is something exceptional made right here in the good old USA…that’s the one I want.  The American Air Arms EVOL is one of those exceptional things made here in America….and yes….I want one!  The … END_OF_DOCUMENT_TOKEN_TO_BE_REPLACED
Read More »

Leave it to FX Airguns to take a fantastic gun and make it better.  This is surely the case with the new Wildcat MkIII BT.  BT meaning that the gun now has a carbon fiber bottle, but that’s not the only improvement made.  The new BT also now has two AMP regulators and the same … END_OF_DOCUMENT_TOKEN_TO_BE_REPLACED
Read More »

Every once in a while, a combination of things that have existed for some time come together and are so good that you ask yourself why you haven’t been doing this already.  I think this is the case with the airgun and the LPVO, or Low Powered Variable Optic.  If you make that a semi-automatic … END_OF_DOCUMENT_TOKEN_TO_BE_REPLACED
Read More »

Hi everybody.  Today’s review is on the new flagship scope from Hawke…the Frontier 34 SF ZS FFP.  The acronyms stand for Side Focus, Zero Stop, and First Focal Plane.  The 34 stands for the massive 34 millimeter main tube.  The scope has all of these attributes, and many more.  With a price tag into the … END_OF_DOCUMENT_TOKEN_TO_BE_REPLACED
Read More »

Hi everyone.  This article is going to show you how I set up a gun for field target competition.  Specifically, for Hunter Field Target.  There are different classes in field target, and Hunter is by far the most popular class.  It’s also where I’d recommend starting out if you’re new to field target.  I wrote … END_OF_DOCUMENT_TOKEN_TO_BE_REPLACED
Read More »

I’d bet a dollar that most of us airgunners started with a multi-pump when we were kids.  I know I did.  The Daisy 880 and the Crosman 1377 were my first two.  Many more followed, and I literally cannot even guess how many thousands and thousands of shots I’ve taken with a multi-pump airgun.  Perhaps … END_OF_DOCUMENT_TOKEN_TO_BE_REPLACED
Read More »
Loading...