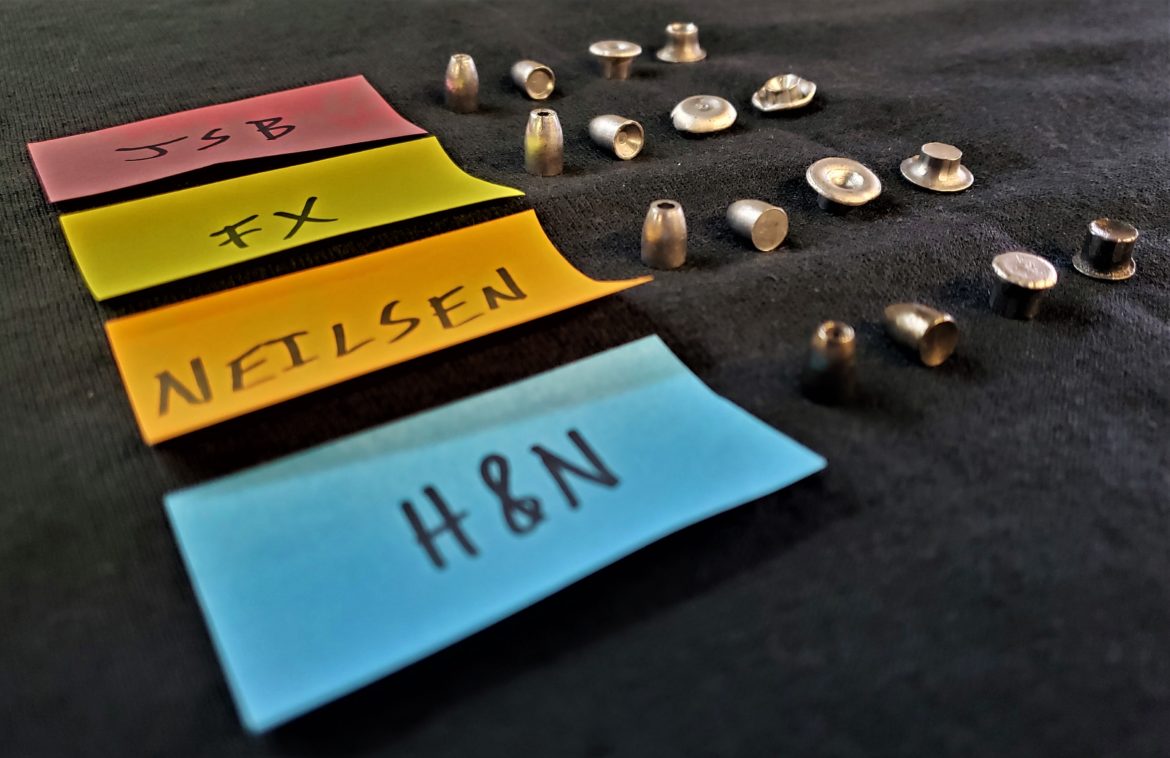 With all of the new airgun slugs hitting the market, you might be asking yourself which one you should choose.  The simple answer to that is…whichever one your gun shoots the best.  Some guns will prefer one over another just like pellets.  Still, let’s say that your gun shoots them all equally well.  Then how do you choose?  Hopefully I can provide some data today to help you make that decision.  Below is a link to the full length video that accompanies this report.  I suggest taking them both in for the full story.

Like I said above, the accuracy you’re going to get out of your personal gun with any of these slugs might be very different than any other gun I might test them with.  However, I still had to choose a gun or guns for my testing.  After testing them all through several guns, I settled on the Daystate Red Wolf Safari.  It shot them all very well.  I used it for both my accuracy and ballistic gel testing.  It’s a very high powered .22, and all of these slugs liked going fast.  Your results may vary.

My testing consisted of three undeniably empirical categories, and one (relatively) deniable empirical category.  That one would be accuracy, and we discussed that above.  The other three are a 20 count sample of all four measured for both weight and diameter, and a two count sample of all four shot into Clear Ballistic gel and measured for both penetration and expansion.  Let’s start with the boring, but highly important, stuff.  Weight and diameter.

Let me preface the weight data by saying WOW!  These were all impressively consistent in the weight category.  In fact, they were all at least as consistent as the very best pellets…and in some cases FAR more consistent than any pellets I have ever seen.  The winner of this category was Neilsen Specialty Ammo, and by a wide margin.  While the largest weight spread was still very small (JSB Knock-Out) at only 0.56gr, the Neilsen Specialty Ammo slugs had nearly NO spread at a miniscule 0.02gr.  No, that is not a typo.  0.02gr!  Well done, Mr. Neilsen.  I don’t know how you do that, but WELL DONE!  The others were also spectacularly consistent as can be seen in the chart below.  There are really no losers in this category.

Again….WOW!  It is clearly apparent that quite a bit of care and technology goes into airgun slug production.  I used a Pelletgage to measure the diameter of the slugs.  In case you’re not familiar with the Pelletgage, it has a level of precision of +/- 10 microns.  MICRONS!  That’s about the size of large bacteria…if there is such a thing as a large one.  I want to make it clear that not all measuring instruments will agree with one another.  The measurements I got using my instrument might be entirely different than the measurements you get using yours.  Consider these measurements more reflective of the sample compared to itself than a comparison of measuring instruments. Again, your results may vary.

While absolutely none of the slugs measured their advertised size according to my Pelletgage, all being larger than advertised, the level of consistency is astonishing.  Both the JSB Knock-Out and the Neilsen Specialty Ammo slugs measured precisely 0.2188″.  There was absolutely no spread or deviation.  None.  Zip, zilch, nada.  I just can’t believe that.  In fact, I didn’t…so I measured ANOTHER 20 of each.  Same thing.  No deviation from 0.2188″ whatsoever.  This makes them both the winner of this category.  That’s not to say that the FX Hybrid or H&N Slug HP did bad.  Not by a long shot.  The FX were more consistent than the H&N slugs…but look at the chart below.  The spread and deviation of even the losers of this category are insanely minute.  Still, ANY spread or deviation is what separated the winners from the rest of the pack in this category.  Yet again, well done to all!

I know I’ve used the word “consistent” a lot in this report, but it seems that consistency is the nature of these four slugs.  I shot two of each into a calibrated Clear Ballistics Extra-Long Airgun Block.  I used the Daystate Red Wolf Safari for my testing.  All shots were taken at 20 yards indoors with a 70 degree ambient temperature.  Both the penetration and expansion of each type was almost identical.  I cannot call a clear winner in this category because I don’t know what you want out of a slug.  Each has it’s own characteristics and usefulness.  Do you want more expansion and quick energy transfer out of your slug than penetration?  If so, the Neilsen and the FX slugs would be a good choice.  Do you want less expansion and maximum penetration?  If so, the H&N is what you want.  If you want a wonderful balance of both, I’d recommend the JSB Knock-Out.  It just depends on what you want and need out of a slug.

Below are tons of pics of the testing, although the video linked above is really the best way to take in this test.  I know in the first picture of the gel block it looks like the wound tracks are curved.  They are not.  They’re straight as can be.  The fact that the block was still misshapen from packaging is bending the light like a lens.  All wound tracks ARE straight, and none left massive craters like you see happen in poorer testing mediums such as clay.  No offense to anyone who uses it.  It’s just that clay is probably the very worst medium commonly used to test penetration and expansion.  It does not in any way represent what will happen in an animal.  The accuracy category results are below these pictures…so don’t wander off quite yet. 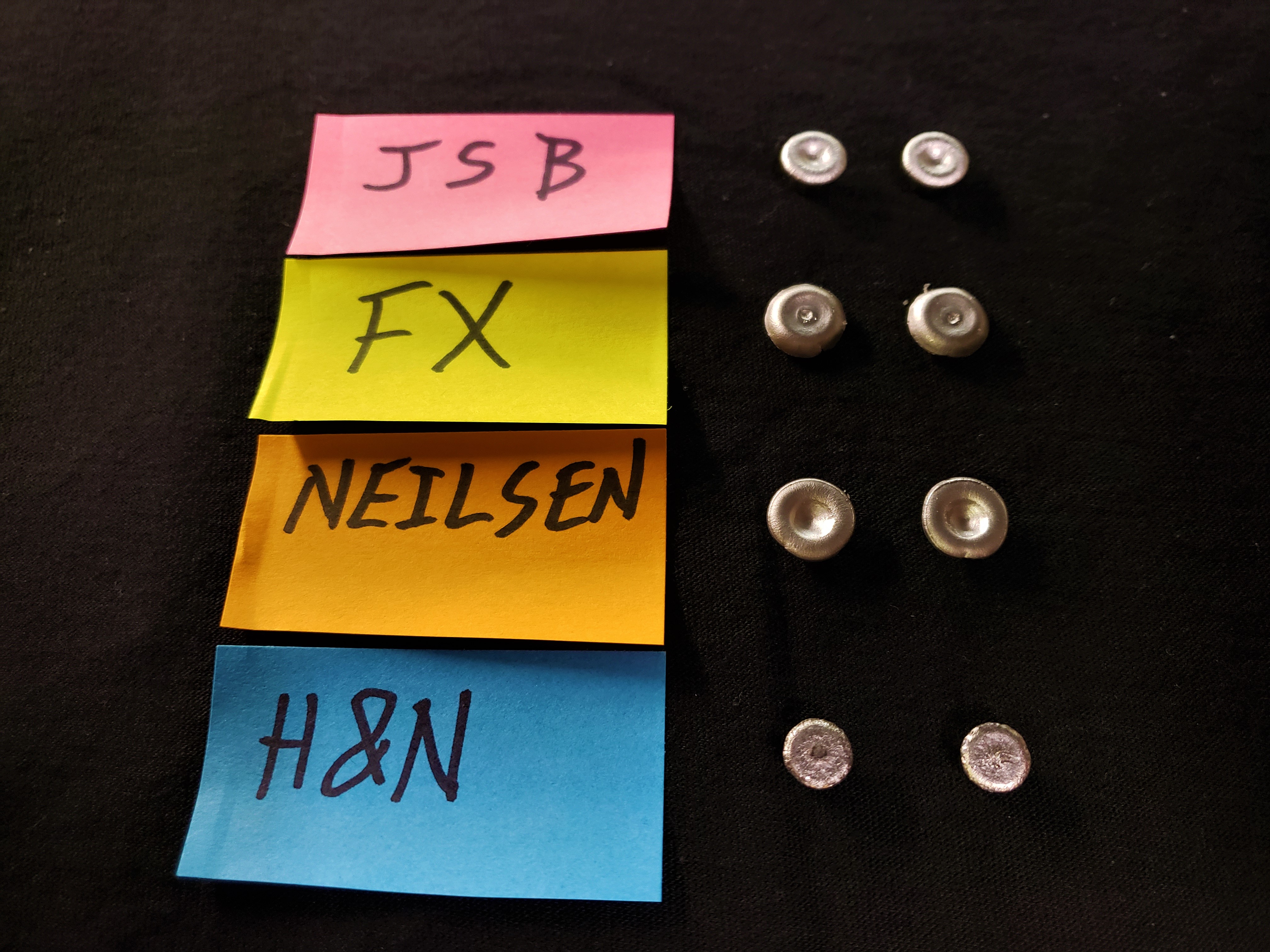 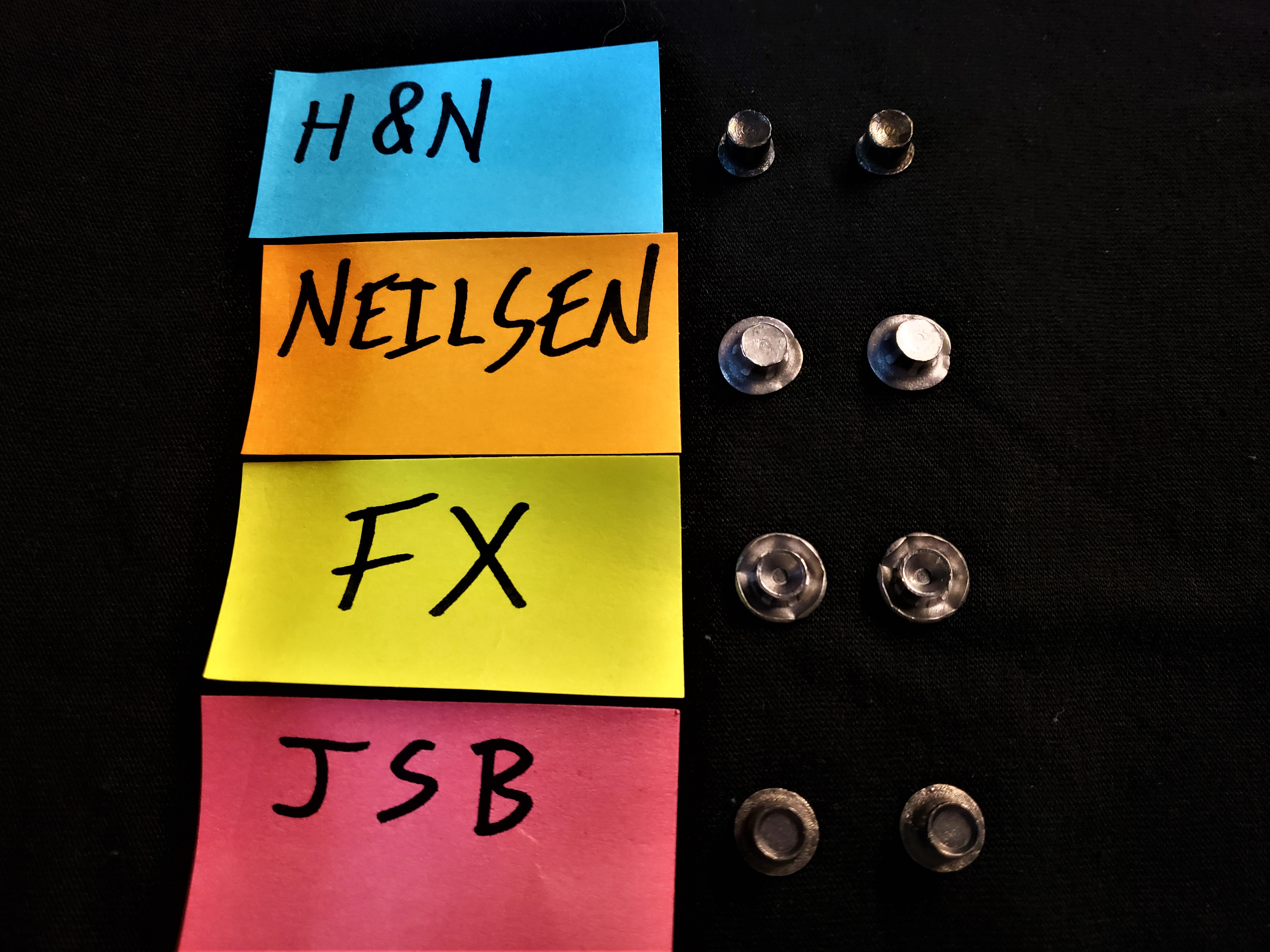 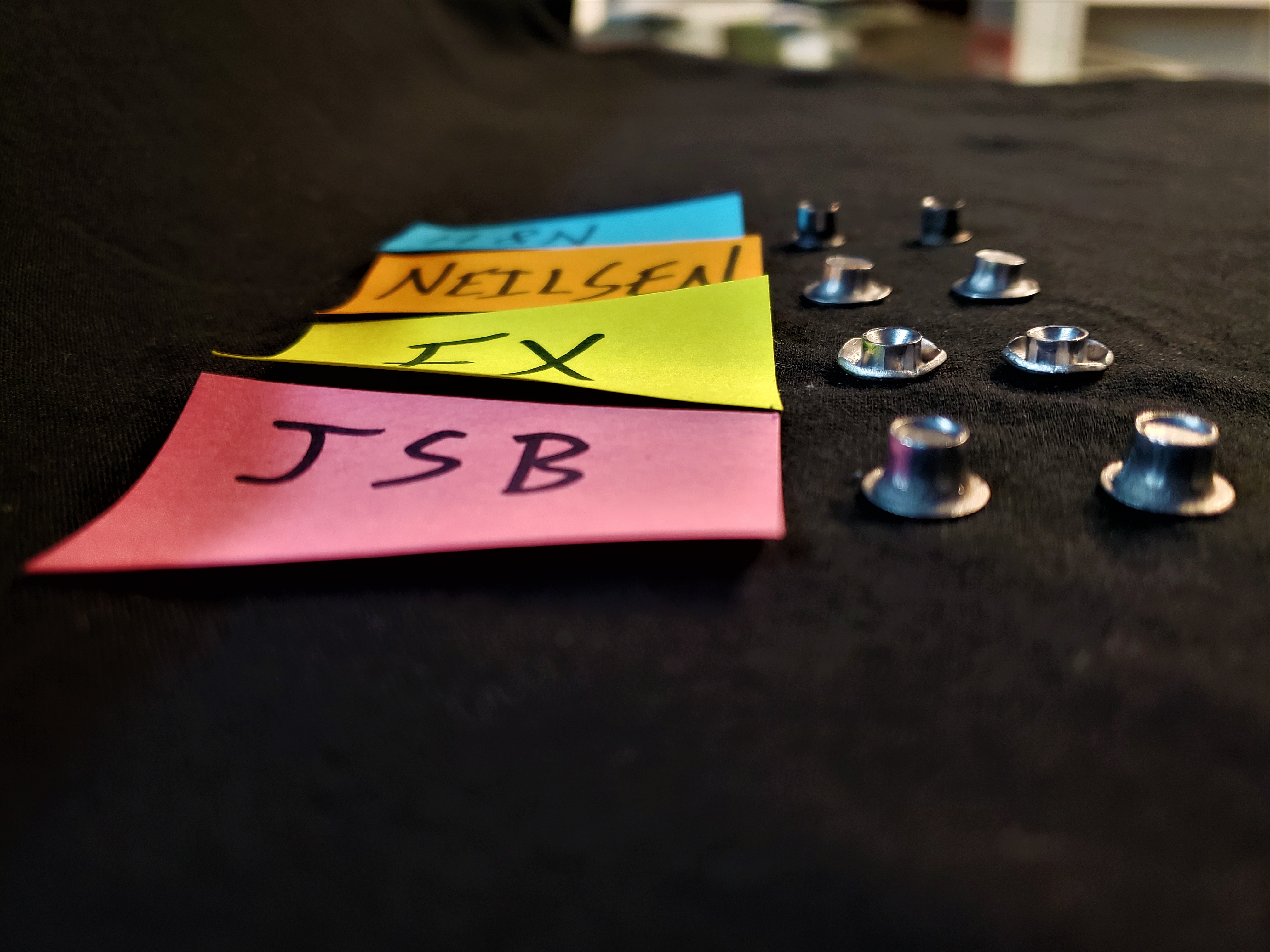 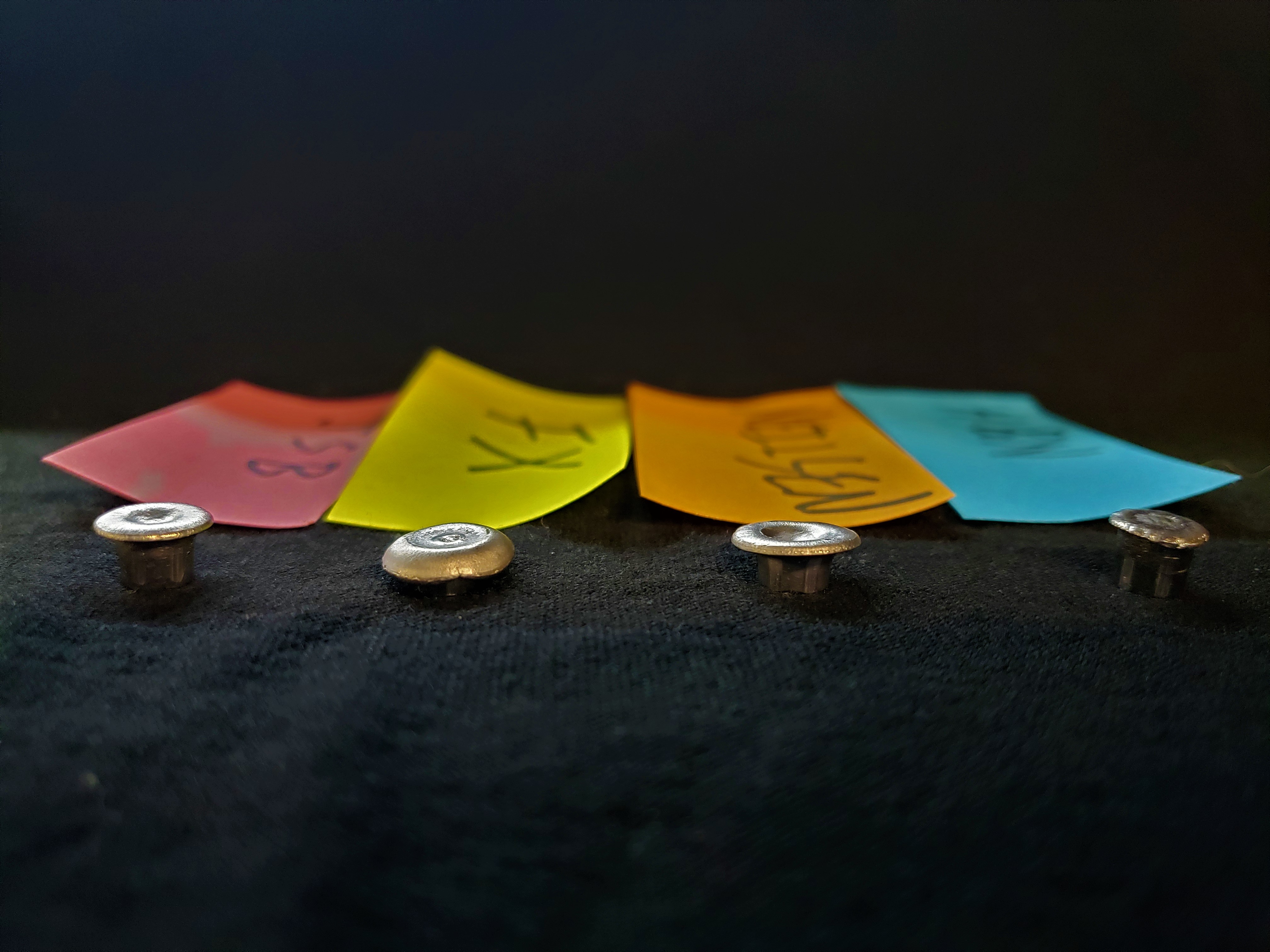 Ok.  Here we are at the kinda sketchy test.  When testing a gun, it’s easy to say which ammo is the most accurate for it.  When testing ammo, it’s wrong to say that one is plainly the most accurate.  All I have determined here is which is the most accurate in the particular Daystate Red Wolf Safari that I used for the testing.  You will very likely find that my results are very different from yours if you use a different gun.  I also only used 3 shot groups at 100yds.  The wind where I test is commonly strong and variable, and that was certainly the case during my many attempts at testing these slugs for accuracy.  Hopefully I’ll soon be doing all of my testing indoors, which will help to eliminate the environmental variability in my current testing.

Having said that, both the Neilsen and H&N slugs tied with a sub-MOA 0.865″ three shot group at 100yds.  The JSB and FX slugs were both just barely over 1 MOA.  All things considered, that is exceptional accuracy for all.  Especially when you factor in the wind conditions.  Just take this accuracy testing for what it’s worth…which is mostly nothing.  You’re just going to have to try them in your gun and see if it likes them or not.  Any way you look at it, they’re all great candidates.  I’ll spare you the pictures of the groups, but you can see them all in the video linked above.

If you were expecting me to tell you which one of these slugs is simply the best….well….I’m not going to.  I couldn’t even if I wanted to.  I’m simply presenting the data I collected, and noting the stand-outs in each category.  Every one of these slugs is incredibly consistent in size, weight, and terminal performance.  While their terminal performance differs, what is best for me and my needs might not be what is best for you and your needs.  While one might be the most accurate in my gun, it very well might be the least accurate in yours.  I try to leave my opinion out of the reports I prepare for you…but in my opinion…they are ALL fantastic products.  You’re on your own to figure out which one is best for you.  I hope you’ve found all of this informative and helpful in that endeavor.

If you’re like me, Made In America means something to you.  Sure, other countries can produce some fine goods…but when there is something exceptional made right here in the good old USA…that’s the one I want.  The American Air Arms EVOL is one of those exceptional things made here in America….and yes….I want one!  The … END_OF_DOCUMENT_TOKEN_TO_BE_REPLACED
Read More »

Leave it to FX Airguns to take a fantastic gun and make it better.  This is surely the case with the new Wildcat MkIII BT.  BT meaning that the gun now has a carbon fiber bottle, but that’s not the only improvement made.  The new BT also now has two AMP regulators and the same … END_OF_DOCUMENT_TOKEN_TO_BE_REPLACED
Read More »

Every once in a while, a combination of things that have existed for some time come together and are so good that you ask yourself why you haven’t been doing this already.  I think this is the case with the airgun and the LPVO, or Low Powered Variable Optic.  If you make that a semi-automatic … END_OF_DOCUMENT_TOKEN_TO_BE_REPLACED
Read More »

Hi everybody.  Today’s review is on the new flagship scope from Hawke…the Frontier 34 SF ZS FFP.  The acronyms stand for Side Focus, Zero Stop, and First Focal Plane.  The 34 stands for the massive 34 millimeter main tube.  The scope has all of these attributes, and many more.  With a price tag into the … END_OF_DOCUMENT_TOKEN_TO_BE_REPLACED
Read More »

Hi everyone.  This article is going to show you how I set up a gun for field target competition.  Specifically, for Hunter Field Target.  There are different classes in field target, and Hunter is by far the most popular class.  It’s also where I’d recommend starting out if you’re new to field target.  I wrote … END_OF_DOCUMENT_TOKEN_TO_BE_REPLACED
Read More »

I’d bet a dollar that most of us airgunners started with a multi-pump when we were kids.  I know I did.  The Daisy 880 and the Crosman 1377 were my first two.  Many more followed, and I literally cannot even guess how many thousands and thousands of shots I’ve taken with a multi-pump airgun.  Perhaps … END_OF_DOCUMENT_TOKEN_TO_BE_REPLACED
Read More »
Loading...